Jamie Raskin Net Worth – How Rich Is The US Politician?

Who is Jamie Raskin?

Jamie Raskin, whose actual full name is Jamin Ben Raskin, has been the Democratic United States representative serving the state of Maryland’s eighth congressional district ever since the year 2017.

This district is situated in Montgomery County, which is a wealthy area of the suburbs located northwest of the United States Capitol, Washington, DC that runs through the rural county of Frederick all the way to the border of Pennsylvania.

Jamie Raskin is also an attorney who was a member of the State Senate of Maryland from the years 2007 through to 2016. Before that, Jamie Raskin worked at American University Washington’s College of Law as a professor in constitutional law. While there, he helped found and direct various programs. 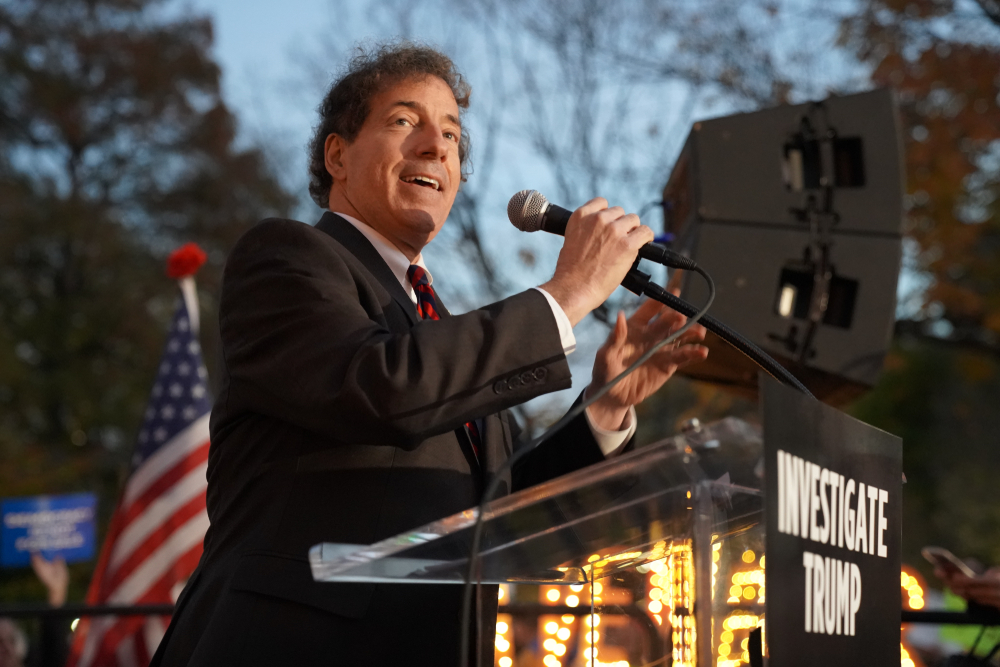 For over twenty five years, Jamie Raskin taught at American University Washington’s College of Law as law professor in constitutional law. While there, he directed and co founded the government and law LLM program, as well as co founding the Marshall Brennan Constitutional Literacy Project.

From the years 1989 through 1990, Jamie Raskin was general counsel for the National Rainbow Coalition, headed by Rev Jesse Jackson. In 1996, Jamie Raskin was Ross Perot’s lawyer, concerning him being excluded from the presidential debates.

In 2006, Jamie Raskin was elected to be a senator for the state of Maryland, serving district twenty, which covered areas of Takoma Park and Silver Spring in Maryland’s Montgomery County.

In 2012, Jamie Raskin was given the title of majority whip and also chaired the Select Committee on Ethichs Reform and the Montgomery County State Delegation. Jamie Raskin also served on the Judicial Proceedings Committee.

Jamie Raskin strongly upheld liberal issues in Maryland’s Senate and was known for getting well with people across the aisle. He sponsored a bill to repeal Maryland’s death penalty, as well as one to expand Maryland’s ignition interlock device initiative.

He also sponsored a bill to establish guidelines of legality for benefit corporations, as well as the United States’ first bill for a National Popular Vote. Jamie Raskin is also a strong proponent of reforming marijuana laws and legalizing marijuana for medical purposes. His bill to that effect went into law in Maryland in early 2015.

James Raskin also led the battle for the legalization of same sex marriage in his home state. His belief is that denying gay couples marriage is akin to a lack of separation between church and state.

In April 2015, Jamie Raskin announced that he would be running for Congress. The seat that he ran for was formerly occupied by another Democrat, Chris Van Hollen, who had decided to run for the Senate, a race that he ultimately won.

Over the course of the primaries, Jamie Raskin was endorsed by Congressional Progressive Caucus’s political arm, namely Progressive Action PAC. When the endorsement happened, it was seventy two members and by the start of 2020 had reached ninety two.

Despite a Democratic primary involving seven candidates in competition, Jamie Raskin managed to win with 33% of the overall vote, being seen as the most liberal of all of them running.

One of Jamie Raskin’s first actions after taking office in Congress was to join forces with a number of other House of Representatives members in order to object to Donald Trump’s certification as the winner of the presidential election in 2016.

This was due to a number of factors they raised including the former reality TV star’s alleged Russian ties, along with the interference that Russia had performed in the election, coupled with deliberate voter suppression by the Republican Party.

At the time, Joe Biden, who was Vice President, ruled that this objection was out of order due to the fact that it didn’t have a sponsor in the Senate. For this sort of objection to go forward, they would have needed at least one member from every chamber, and it was lacking that one.

Still Jamie Raskin continued to assert that Donald Trump’s election as President of the United States was not legitimate due to it having been tainted by Russian leader Vladimir Putin’s “cyber sabotage”, and Republican voter suppression in various key swing states.

Following that up, in June of the year 2017, James Raskin sponsored a bill in order to set up a congressional oversight commission that would be able to declare that a president was incapacitated and thereby have them removed from office under the US Constitution’s twenty fifth amendment.

In the first quarter of 2018, James Raskin launched a caucus called the Congressional Freethought Caucus, alongside Dan Kildee, Jerry McNerney, and Jared Huffman.

The caucus’s goals were to promote the separation between church and state, ensure that public policy was based on science, reason, and morality, rather than religious values, and to fight discrimination against atheists and other non religious people, in addition to religious people. He co chaired it with Jared Huffman.

Jamie Raskin is also a strong proponent of the banning of all discrimination based on a person’s sexual orientation or their gender identity, covering all LGBTQ+ people, including gays, lesbians, trans and non binary individuals, and more. He voted for the Equality Act in 2019, urging his fellow member of Congress to follow suit.

On the twelfth of January in the year 2021, Speaker of the House Nancy Pelosi named Jamie Raskin as the Senate trial for the second impeachment of Trump’s lead manager.

Jamie Raskin wrote the impeachment article, with the help of Reps Ted Lieu and David Cicilline, charging Trump with the inciting of violent insurrection against the United States government on the sixth of January in the year 2021.

Jamie Raskin was born as Jamin Ben Raskin on the thirteenth of December in the year 1962, in Washington, D.C., United States.

Jamie Raskin’s mom, Barbara Raskin, was a novelist and reporter. His dad, Marcus Raskin, was once a staff aide for President Kennedy on his National Security Council and co founded the Institute for Policy Studies in addition to being an activist for progressive causes.

Jamie Raskin attended Georgetown Day School for his high school education and graduated at the young age of sixteen in the year 1979. He then attended Harvard University, where he was a member of the Phi Beta Kappa fraternity.

Jamie Raskin’s wife is Sarah Bloom Raskin. From the years 2007 through to 2010, she was the Commissioner of Financial Regulation for the State of Maryland. The couple currently resides in Tacoma Park in Maryland, United States of America.

Furthermore, Joe Manchin stood in opposition to her taking the seat due to the importance she places on addressing climate change. Due to the stalemate, she decided to withdraw the nomination. From 2014 through 2017, Sarah Bloom Raskin was the US Treasury Deputy Secretary.

Jamie and Sarah Bloom Raskin had three children. Their two daughters, Tabitha and Hannah are now grown. Their son, Thomas, tragically committed suicide when he was twenty five after a long war with depression. He was laid to rest on the fifth of January in the year 2021. The very next day, Jamie Raskin, along with his daughter and her husband, were in the Capitol building during the insurrection on January 6.

Within hours of the attack, Jamie Raskin began to draft the impeachment articles against Trump, and 6 days later, Nancy Pelosi made him the impeachment’s lead manager.

Jamie Raskin does not eat meat and hasn’t since 2009. Jamie Raskin survived colon cancer after chemotherapy, radiation, and surgery. Jamie Raskin is Jewish. Jamie Raskin’s ancestry is from Russia, in the form of immigrants who came to the United States of America to seek a new life for their family present and future.

Jamie Raskin has a healthy social media presence, with accounts of nearly all of the major platforms. Unlike social media done by celebrities, however, due to the fact that this is an official government account and position, Jamie Raskin net worth is not affected by and has no connection to his social media.

As of the present time, Jamie Raskin has approximately forty four thousand followers on this popular social media platform. Unlike social media done by celebrities, due to the fact that this is an official government account and position, Jamie Raskin net worth is not affected by and has no connection to his social media.

As of the present time, Jamie Raskin has nearly four hundred and eighty seven thousand followers on this popular social media platform. His account is in turn following over six thousands accounts currently.

Unlike social media done by celebrities, due to the fact that this is an official government account and position, Jamie Raskin net worth is not affected by and has no connection to his social media.

As of the present time, Jamie Raskin has approximately twenty nine and a half thousand followers on this popular social media platform. Jamie Raskin’s account is itself following approximately one thousand and sixty six accounts in return currently.

Unlike social media done by celebrities, due to the fact that this is an official government account and position, Jamie Raskin net worth is not affected by and has no connection to his social media.

James Raskin has an official LinkedIn business account to help him connect to his colleagues and constituents. Unlike social media done by celebrities, due to the fact that this is an official government account and position, Jamie Raskin net worth is not affected by and has no connection to his social media.

James Raskin does not have an official public verified TikTok account. Should this situation change at any point in the future and he decide to sign up for one, we will be sure to update this page with that information. Our goal is to keep our readers informed of the latest news about Jamie Raskin net worth, life, and career.