Kristi Noem Net Worth | How Rich Did She Get?

Kristi Noem net worth, and the politician’s Trump-like attitude to Covid-19, attracted attention, and criticism, when she openly advocated against measures to combat the pandemic. The first woman, and 33rd governor of South Dakota, has been mentioned in the 2024 race for president. Cast your vote on the Kristi Noem net worth and carry on reading to see if you are right… or left.

Who is Kristi Noem? 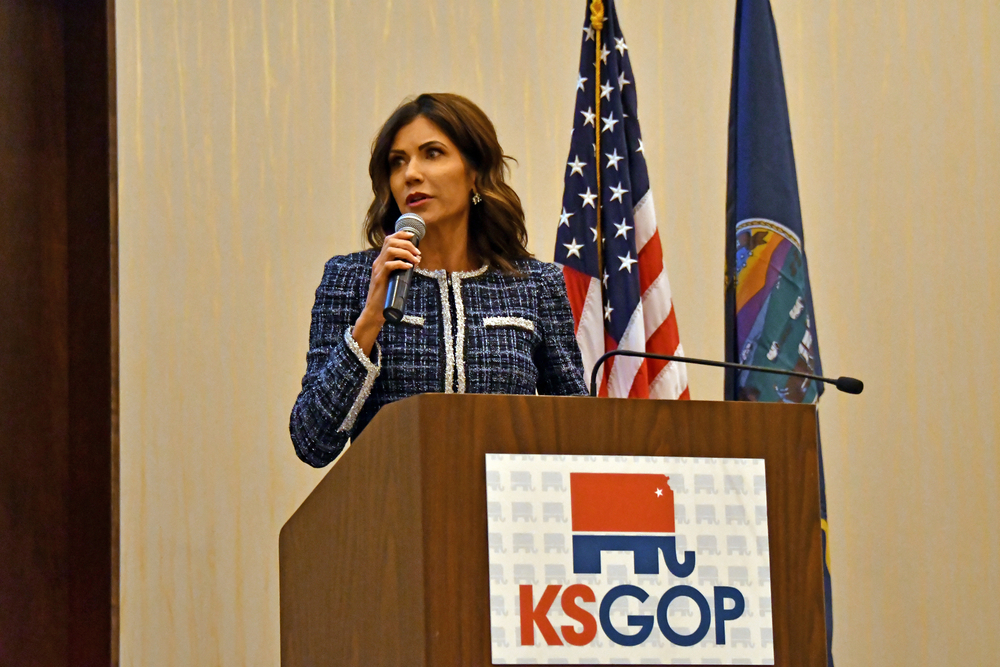 South Dakota’s Covid Queen is a Republican and her views are firmly planted on the same side of the fence that Donald Trump looks at people from. Although she has had many people try to put labels on her, she said that at the moment all she is focusing on is getting her point of view across to the people of her state. So who is Kristi Noem and what is Kristi Noem net worth?

This feisty South Dakota Governor was born on a ranch, grew up on a ranch, stays on a ranch and according to her will, she will probably die on a ranch in the Mount Rushmore state. Entrepreneur, farmer and rancher, wife, mother and politician, Kristi Noem’s net worth is more than just a number, she wears many different hats and has also been accused of being cold-hearted.

Kristi L. Noem started her term as the first woman Governor of South Dakota in 2019 and will run for re-election after the completion of her current term on January 3, 2023. Her name is registered on the Republican list for the primaries that happen on June 7th 2022.

The following details Kristi Noem’s net worth and how she acquired her wealth. 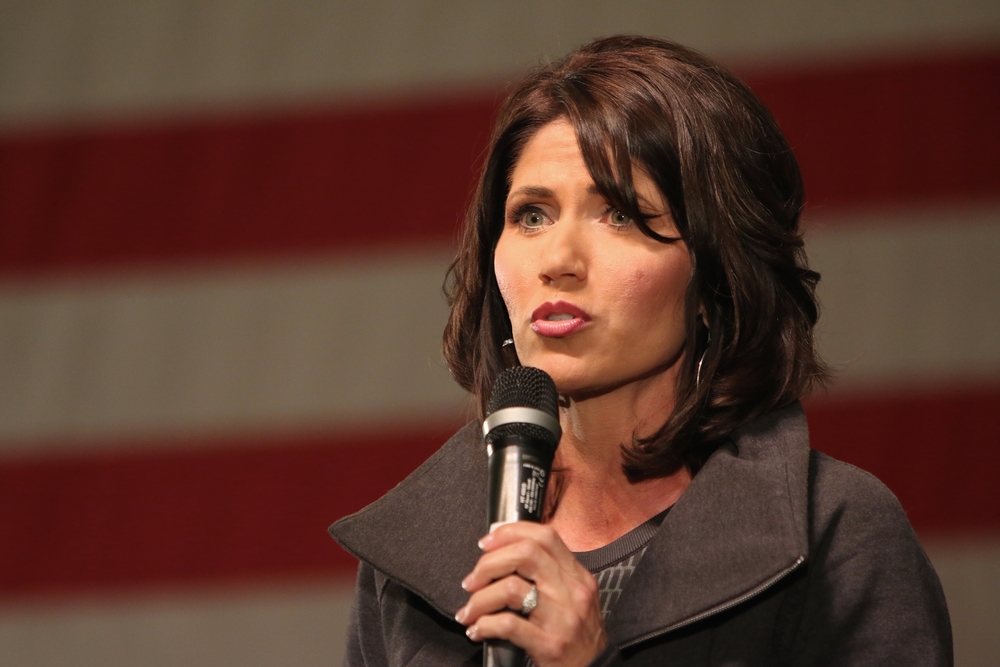 Although Kristi Noem was born on a ranch and worked there from childhood, she only started getting financial compensation when her dad died and Kristi Noem net worth escalated greatly.

Since she started her career in politics, 16 years ago, the lady rancher has amassed a Kristi Noem net worth that is currently believed to be at least $4 million dollars strong. The cowboy boot wearing Snow Queen winning governor also owns Racota Valley Ranch.

This 9,700-acre family ranch in Hamlin County can most certainly be described as a legacy for her family, including her two brothers and their mother. They inherited the ranch when Ron Arnold was killed in an unfortunate and tragic accident while he was working on the ranch. Kristi Noem is said to be staying there along with her husband, mom and family.

Besides earning compensation of $116,400 as South Dakota Governor, she also receives income from ranching and business affairs, both from her, as well as her husband, Bryon Noem.

The Noems own a property in her hometown of Castlewood, South Dakota and she shares official duties during the week with weekends working on the family ranch. Bryon owns a successful insurance agency but pitches in whenever he can to help with maintenance and other duties on the ranch.

The lady governor is a sprightly 50-years-old and still rides horses, on the ranch as well as at public appearances. When she dismounts and takes her boots off, she makes a mark on the pole at 5 foot and 7 inches, and when she steps on the scale, she is a filly-esque 128 pounds. Only the epic Kristi Noem net worth weighs this woman down…

It was a Tuesday in Watertown, South Dakota on November 30 1971, the day that Kristi Lynn Arnorld took her first breath of Mount Rushmore State air. Ranching and rural life is in her blood because Ron and Corinne Arnold raised their children on their ranch in the Hamlin County district of South Dakota.

What Is Your Opinion On Kristi Noem’s Net Worth?

Kristi Arnold Noem attended Hamlin High School and graduated in 1990. The 50-year-old governor is not your average Southern belle and when she entered a prestigious pageant, she not only won the whole shebang and title of South Dakota Snow Queen, she also won her a nickname that would haunt her later in her career.

It did have a positive impact on her life though. She says that winning the Snow Queen title in the year that she graduated from high school, helped her during her political career and while on campaign as it aided her to be more at ease and better at public speaking.

After high school, Noem would enroll at Northern State University. Her father had a tragic accident and died in 1994, the same year that the soon-to-be governor would graduate. In the years following the passing of her father, Noem attended the Watertown campus of Mount Marty College as well as South Dakota State University.

After Noem’s father died, she and her siblings decided to move closer to home. Kristi Noem’s net worth is positively affected by her ranch, and it can be seen in the passion with which she fights for the right of ranchers as well as government rebates and other examples. 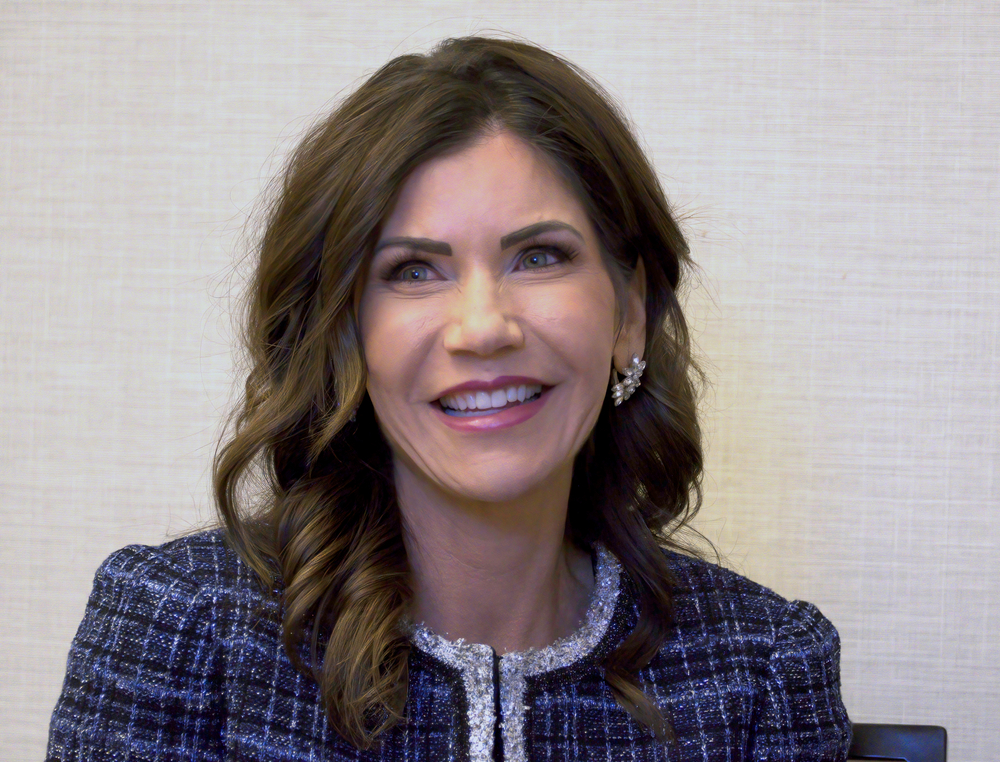 Kristi Noem became the only representative from South Dakota in the US House of Legislature in 2010 – she had been doing good things in the SD legislature for a while before that. What are some of the wins that she had while she was in office? The biggest is certainly the Tax Cuts and Jobs Act, that helps the average family, who lives in the state, to put $2,400 back in their pockets.

Kristi Noem’s net worth and her election campaign was just as controversial as her Covid utterances. She focused on issues like taxes, growth, interference from the federal government and secrecy from the White House; and when the votes were in, Noem was named the Mount Rushmore state’s Governor – the first female in this position.

Governor Noem has advocated that South Dakotans are adult enough to make their own choices…most of the time. This attitude saw her popularity rise among many of the South’s family-oriented communities; it also led to her state becoming one of the worst affected by the pandemic.

Kristi Noem’s net worth for her is being a mother and wife, according to the horse-riding civil leader. She proudly exclaims that her children, Booker, Kassidy and Kennedy are her greatest accomplishments that she achieved along with Bryon, her husband. They have a deep rooted love for their church and family values.

Even with all the controversy regarding her Trump stance towards the pandemic, and the devastation it consequently wreaked in South Dakota, she is still being considered in the next presidential vote.

Kristi Noem’s net worth was already strong enough in 2006 for her to consider climbing onto the wild bull that is politics. Her name was added to the ballots for the sixth state district, which included the counties around her hometown of Hamlin. In 2006 she won the seat with 39% and bettered her votes in 2008 when she was re-elected with 41%. South Dakota maintained the seat for four years.

Noem was inducted as assistant majority leader and also sat on the House Taxation, and House State Affairs Committees while sponsoring the bill to lower the age of compulsory schooling to sixteen years. According to her it did not force anyone to do anything they did not want to, so was ineffective.

Kristi Noem net worth In 2010 was getting a start. It was also the year in which she decided that she wanted to go to congress. She beat Chris Nelson and Blake Curd (both supported her in the general elections), to win the primary for a seat in the USHR and defeated Stephanie Herseth with nearly 50% of all the votes. She had a larger win in the 2012 re-election with 57%.

The Snow Queen was re-elected in 2014 and 16 over the democrats and was only the fourth lady South Daktan in Congress. While in congress Kristi Noem had already started investing in her future by doing further studies. She graduated with a Bachelor in Political Sciences in 2012.

With her support at an all time high in 2016, Noem knew that now was the time for the first woman governor in the beautiful Mount Rushmore state, and Kristi Nowm’s net worth reflected her go to attitude. She beat Marty Jackley, the then Attorney General, for the primary Republican support. After winning with more than half the votes she made it clear that she is not a one-term kind of lady.

As pointed out before, this lady governor has horse sweat for blood and is first and foremost a rancher. She was practically born amongst the horses and stables and worked there from as soon as she could walk. She became even more invested in the farm when her father passed away.

Kristi Lynn Arnold may as well have been born in a barn in Watertown when her mother gave birth to her on November 30 in 1971. She inherited the ranch (along with her siblings and mom) when her father was fatally injured in a mechanical accident while working on the farm.

Many of her bills and political aspirations have been formulated though her roots as a farmer. When Donald Trump mentioned estate tax reform, Noem was one of the first to offer her full support.

Kristi Noem has a deep seated love for rural life and family values, and started working at the ranch even as a toddler. She enjoyed her high school years at Hamlin High School and graduated in 1990.

The ranch lady governor is not all business and brains. She entered the local South Dakota Snow Queen Pageant in the same year as graduation. Winning the title was one of the events that made her think about following a career in politics.

Kristi Noem net worth was not to be waited on, and nor was the go-getter governor. In 1991, Noem became an alma mater of Northern State University – her father’s tragic passing was a dark cloud for the lady in the year that she received her graduation papers from the dean in 1994.

Taxes became a great issue for the ranching family and it took hard work from everyone to keep everything paid, and not lose the family legacy. Self-investment and personal growth was a huge influence on Kristi Noem’s net worth and her drive to succeed. Mount Marty College had a campus in Watertown and Kristi enrolled in a number of classes here.

When the patriarch of the Arnold family passed away in 1994, the children all banded together, moved closer, and formed a laager near and around the family residence. Noem mentioned that this financial battle to keep the ranch going has seen her stance in politics shift towards the ranchers’ needs in South Dakota.

She married Bryon Noem in 1992 at a tender twenty years old, and while she worked towards a degree in Political Sciences, Bryon received his Bachelor’s in Business Finance. He first worked for, and later acquired, the insurance branch of the bank. He has his own agency near the couples home in Castlewood.

The Governor stays near work during the week and spends most weekends working on the family ranch.The Kristi Noem net worth will keep growing with the governor.

With all the Covid-controversy and dislikes; Governor Kristi Noem’s net worth is seen to be around $4 to 6 million.

Want to learn more? Check out our blog to learn more about Patrisse Cullors‘ net worth, and find out just how rich Linda Tripp is.