Emmy Rossum Net Worth | Learn About Her Successful Career

Emmanuelle Grey Rossum is an American singer, actress, and director. She became famous as a teenager playing parts in movies such as “Songcatcher” and “Mystic River”. Today she is best known for the part she played Fiona Gallagher in the Showtime series “Shameless” which ran for nine seasons over eight years. Emmy Rossum net worth is a result of a successful career and dedication.

Still only 35, Emmy Rossum has had a remarkable career and has accumulated a fair amount of wealth in her quest for on-screen perfection. In this article, we ask who is Emmy Rossum? We explore her career and personal life and find out just what is Emmy Rossum’s net worth. Here’s her astounding career story.

Emmy’s real name is Emmanuelle Grey Rossum, she was born on September 12th, 1986 in Sunset Park, Brooklyn. She is the only child of a single mother, Cheryl Rossum, a corporate photographer who served as Steve Jobs’s personal photographer.

Rossum’s mother was pregnant with her when her parents split. Her father played no part in her life with Emmy meeting him just twice through her childhood. Rossum’s mother is descended from Russian Jews. Her father, a Protestant, is of English/ Dutch ancestry.

Emmanuelle was named after her great grandfather, Emanual. She identifies with the Jewish culture.

Rossum has always had a beautiful, tuneful singing voice. At the tender age of seven, she was invited to join the Children’s Chorus of the Metropolitan Opera. She sang with the chorus for five years, performing with such stars as Luciano Pavarotti and Placido Domingo and playing parts in famous operas such as La Boheme. Over her five years in the chorus, the young Emmy sang in twenty operas using six different languages. She earned between $5 and $10 for each performance.

As she grew, Emmanuelle Rossum became increasingly more interested in acting rather than singing. So, she signed up with the New Actor’s Workshop in New York City, taking classes with Flo Salant Greenberg. She also worked under the direction of Terry Knickerbocker.

Emmanuelle attended a private Manhattan school, the Spence School. She soon dropped out of school as it got in the way of her career progression. Still, she earned her high school diploma online at the age of fifteen through the Stanford University Program for Gifted Youth. She went on to study, art history, French, and philosophy at Columbia University from whence she graduated with a Bachelor of Arts in 2008 at the age of 24. 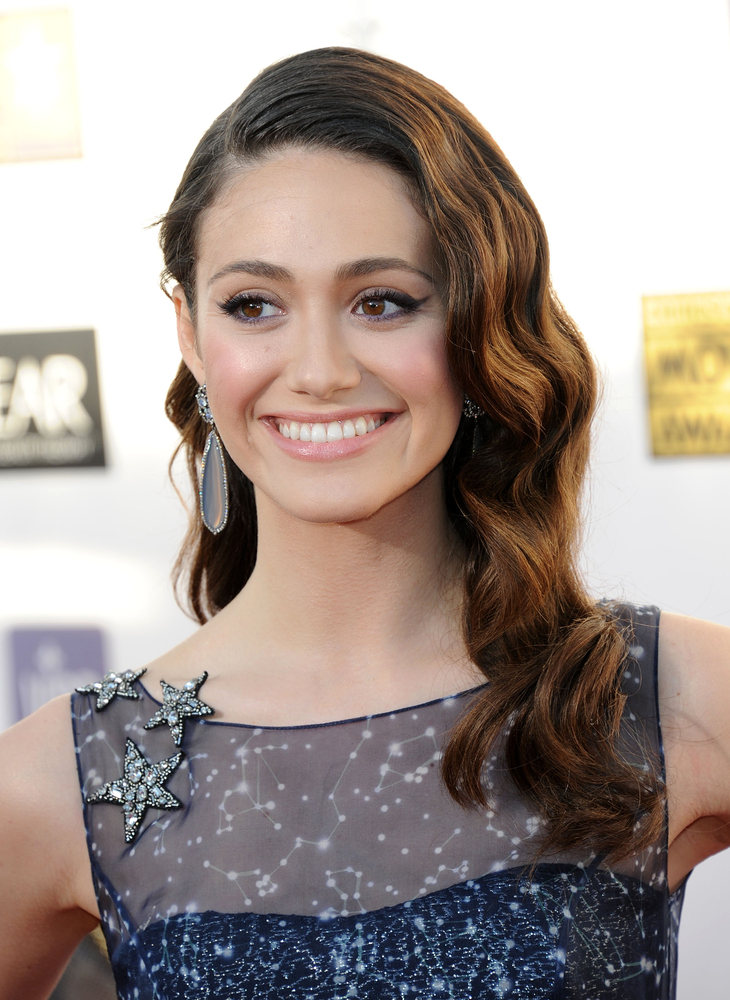 Emmy Rossum made her debut on television in August 1996 playing a role in the television film “Grace and Glorie”. In 1997, she played Abigail Williams in “The World Turns”, a daytime soap opera. She also appeared in an episode of “Law and Order”.

Emmy was nominated for the Young Artist Award for her work in the television movie “Genius” in 2019. The nomination was for Best Performance in a TV movie.

In 2000, she played the young Aubrey Hepburn in the “Aubrey Hepburn Story”, an ABC television movie. Rossum was just thirteen when she made her first film appearance in the “Songcatcher” in 2000. Emmy played the orphan Deladis Slocumb and sang the “Songcatcher” soundtrack in a duet with Dolly Parton. The movie debuted at the Sundance Film Festival, winning the Special Jury Award for Outstanding Ensemble Performance. Rossum received the best Debut Performance award.

That year, Variety magazine named Emmanuelle “One of the Top Ten to Watch”. She went on to play guest roles in “Snoops” and “Genius” earning her a Young Artist Award nomination for best performance in a movie.

In 2001 Rossum played a part in the “America Rhapsody” and in the British thriller “Happy Now?”. The following year, Emmy Rossum net worth grew when she took the leading role in “Passionada”.

Emmy Rossum net worth had a significant jump in 2003. She played 3 major roles. She played the main character, an aspiring songstress, in Nola and also took a leading role in Clint Eastwood’s “Mystic River”, her first movie with a major studio, playing alongside Sean Penn. Rossum was now making it big in the movie industry as she landed a starring role in the science fiction movie “The Day After Tomorrow” along with Jake Gyllenhaal.

She also played a leading role in the screen adaptation of “Phantom of the Opera”, the musical by Andrew Lloyd Webber. For this performance, she was nominated for a Golden Globe award for Best Actress in a Musical or Comedy. She also went on to win several awards for her sterling performance which helped Emmy Rossum net worth sky-rocket.

In 2006, Rossum played Juliet in William Shakespeare’s “Romeo and Juliet” at the Williamstown Theatre Festival. In the same year, she played a role in the remake of the “Poseidon Adventure”.

Rossum went on to play in several other movies until in 2011, she landed the starring role as Fiona Gallagher in the series, “Shameless”. It’s a dark comedy about a dysfunctional blue-collar family. Rossum directed an episode of the series in the 7th season.

Emmy bowed out of the show at the end of season 9. She had spent eight years playing Fiona and claimed that leaving the show was like leaving her family.  By the time she left “Shameless,” Emmy earned $350,000 per episode.

Still, it hadn’t always been like that. She had spent a large part of the time on the show at a fraction of the salary paid to her co-star, William H Macy. Her fight to receive an equal pay packet was well-publicized. She had to threaten to stop working before she received what she demanded in season 7. In August 2018 Emmy announced in an emotional Facebook post that she would leave the show at the end of season 9. By the time she left, Emmy had made 110 episodes spanning eight years. The series continued without her and there has recently been speculation that she may return during season 11.

For the last three years, Emmy Rossum has been busy researching and filming a miniseries called Angelyne. It’s taken a while because she has had to navigate her way through Covid-19 restrictions and the pregnancy and birth of her daughter.

The series is based on a Los Angeles billboard queen of the same name. Emmy plays the lead role despite bearing little resemblance to the subject of the movie. Though Angelyne posted larger-than-life billboard photos of herself all over Los Angeles in the 1980s, nobody knew who she really was.

Emmy did her homework and discovered that the woman was a Polish-born daughter of holocaust survivors. Emmy met with Angelyne and wanted her to approve the project. It was, however, not to be. Angelyne has refused to watch the series as she claims that it is not an accurate depiction of her life. The series debuted on the 19th of May 2022.

Emmy Rossum net worth is not only made out of acting. Emmy’s an opera-trained singer with a classical background. She grew up performing on theatre stages across New York.  Her musical tastes have been influenced by Whitney Houston, Celine Dion, Sarah McLachlan, and Faith Hill.

Emmy’s success in the Phantom of the Opera was followed by several offers to produce classical music albums. She decided instead to produce something a little more modern. She released her first album “Inside Out” in 2007, both writing and singing the songs on the album.

Her album reached position 199 on the US Billboard Charts. Emmy went on to release three Christmas songs on an EP named “Carol of Bells” also in 2007. Rossum was named the “Who’s Next” artist of the year by Yahoo in 2007 and MSN dubbed her the “One to Watch.”

Emmy released a second album “Sentimental Journey” in 2013. It was a collection of popular songs from the 1920s through the 1960s. Her second album made it to 92 on the US Billboard charts and all the way to number one in Jazz Albums.

Emmy Rossum is the face of the Burt Bees “I’m not Synthetic” marketing campaign. She likes the fresh, light cosmetics in this line which is why she endorses the brand. Rossum also has an endorsement agreement with Cotton Inc.

For many years, Emmy Rossum has been active in various charitable activities. She started off as an advocate for Youth AIDS, an international initiative that provides humanitarian assistance and expands global AIDS awareness.

In 2008, she was hired as the spokesperson of Pinkitude, a clothing brand raising breast cancer awareness. She also represented the Natural Resources Defense Council Action Fund in 2010. She’s a volunteer with Global Green USA a group that collects funds for environmental preservation. In 2015, she was part of the Best Friend Preservation Society campaign, promoting animal adoption.

Rossum uses her influence to convince women to live better lives as part of the “I weigh” movement which aims to help women to build a positive body image.

Emmy suffers from Coeliac disease so she has to carefully watch her diet and can’t eat anything that contains gluten. That means no wheat, no pasta, no bread. She is active on social media with 3.5 million followers on Instagram, 1.3 million on Facebook, and 858k on Twitter.

Emmy married Justin Siegel in 2008 but the marriage didn’t last long with Jason filing for divorce just 19 months later. He claimed irreconcilable differences as the reason for wanting the divorce.  The two were divorced on the 28th of December 2010.

In 2013, Rossum started dating director and writer Sam Esmail. They met on the set of the romantic comedy “Comet” which he directed and in which she performed.  The couple was engaged two years later in 2015. They married in 2017 in the Central Synagogue in New York City. The nuptials were followed by a lavish reception at the Guggenheim Museum. Rossum’s husband is the mastermind behind the Mr. Robot series.

Recommended reading: Jennette McCurdy Net Worth | How Rich Is The Star?

Emmy Rossum has received dozens of award nominations. She has also won a good few

Shalom Life ranked Emmy as number 6 on their list of the “Fifty most talented, intelligent, funny and gorgeous Jewish women” in the world

Emmy Rossum’s net worth estimate is around $12 million. She has made the bulk of her money from acting in leading roles. Though sales of her two albums have also contributed.

Her fight to earn equal pay on “Shameless” went public and she refused to work until she was paid what some of the other stars such as William H Macy earned. In the end, she was paid $350,000 per episode.

Emmy lives in a $2,125 million home in Beverley Hills, California. She bought the three-bedroom, five-bathroom house in 2006. She also had a one-bedroomed apartment in Sutton Place New York City which she sold in 2017 for $1.1 million.

Rossum has a Lexus RX hybrid and red convertible Jaguar F-type. She also has an SUV a Mercedes Benz ML320 Blue Tec.

Emmy Rossum is a young and talented artist. Emmy Rossum net worth is likely to continue to grow as her career over the coming years.