Dave Navarro Net Worth | How Much Does He Make?

A member of the rock band Jane’s Addiction, Dave Navarro is a talented guitarist, singer, songwriter, and television personality. Like many talented musicians, Dave Navarro started young and found early fame. This has many wonderings what is Dave Navarro net worth and how much does he make?

In this article, we’ll investigate this talented musician’s wealth, relationships, and career.

Who is Dave Navarro?

Dave Navarro is a talented musician, songwriter, and lead guitarist who has played for some of the most successful bands of the last four decades. Over the period, he has made a fortune, but he has also battled personal demons that go back to his childhood. He has openly discussed his battles with drug addiction, depression, and other mental health problems.

Dave Navarro seems to have emerged from a dark period of his life, free of addictions and sharing his life with a beautiful woman. Let’s look at the story of Dave Navarro.

David Michael Navarro was born in Santa Monica, California on the 7th of June 1967. His parents were Constance Colleen Hopkins and James Raul Navarro. James Navarro’s grandfather was an immigrant from Mexico and a friend of Mexican actor, Ramon Navarro. It is said that Gabriel Navarro, David’s grandfather adopted their surname Navarro from his acting friend. Dave Navarro has a brother, Gabriel James Navarro.

Inspired by Jimi Hendrix, Dave Navarro started to play acoustic guitar at the age of seven. Before that, he had been learning to play the piano. He subsequently moved on to the electric guitar. Along with Jimi Hendrix, Jimmy Page and Eric Clapton also influenced Navarro’s music.

Navarro’s parents divorced when he was seven and stayed with his mother in Bel Aire.

Navarro’s mother was murdered by an ex-boyfriend in 1983 when Navarro was just fifteen years old. She was with a friend who was also murdered. Navarro’s parents had separated. David was supposed to have stayed over with his mother on the night of the murder. He attributes his decision to stay with his father on the night of the murder to divine intervention. In later years Navarro ascribed his decline into drug use and mental health issues to the murder of his mother. Though he has confessed that he was taking drugs before his mother died. Following his mother’s murder, Navarro was expelled from school for misconduct.

John Riccardi was arrested for the murder of Constance Colleen Hopkins almost a decade later in 1991. This followed a tip-off after he was featured on America’s Most Wanted. John Riccardi was initially sentenced to death for the murders. The verdict was set aside because of a technicality. He eventually ended up with a life sentence with no possibility of parole.

In 2015, Dave made a documentary called “Mourning Son”. In it, he describes his mother’s murder and how it affected him.

Other Guitarists We Recommended Reading:
Jewel Net Worth | How Many Millions Has She Made? 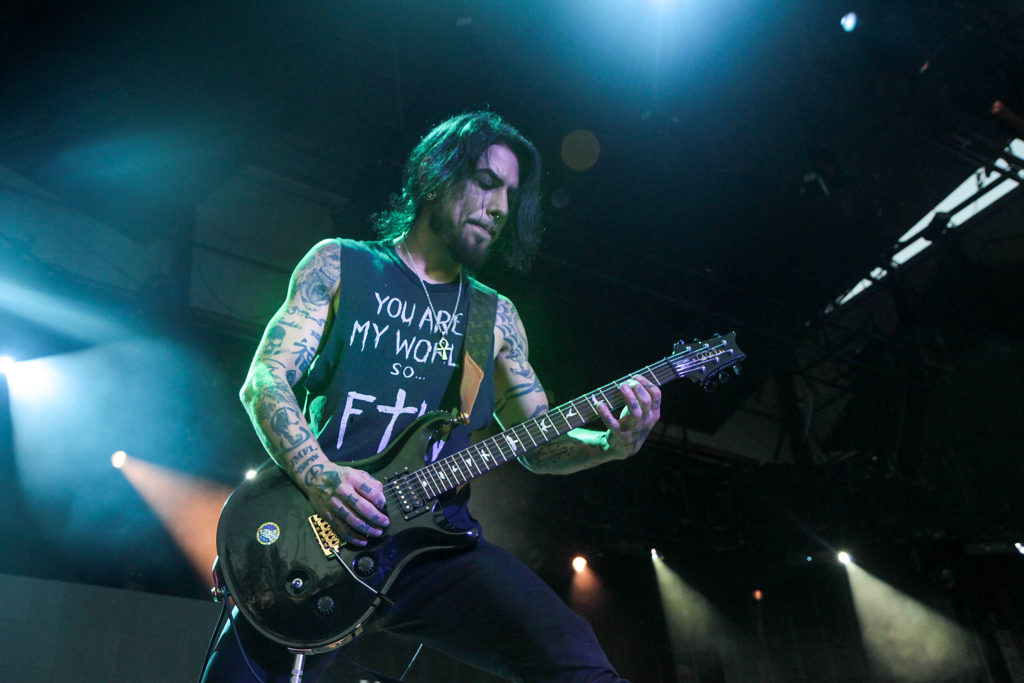 In 1986, Dave Navarro joined Jane’s Addiction as their lead guitarist. Navarro’s friend Stephen Perkins had started the band with Perry Farrell in 1985.

In 1988, Warner Brothers Records released the band’s second album “Nothing’s Shocking”. Once again Dave had contributed to the album, which failed to make the Top 100 though it received excellent critical reviews.

Jane’s Addiction released another album, “Ritual de lo habitual” in 1990. This album was a huge commercial success. It earned double platinum in the United States. Within a month of its release, the album had sold half a million units.

Yet, by this time the band was falling apart due to internal conflicts and drug problems. They took to the road on a farewell tour and then went their separate ways. This road trip was the start of Lollapalooza, now an annual event held in Grant Park, Chicago. It’s one of the biggest music festivals in the world and in the US, it is the longest-running festival.

After the split, Dave Navarro also played for bands like Guns n Roses, Nine Inch Nails, and Butthole Surfers. In 1991, Navarro was invited to take the place of Guns n Roses, exiting rhythm guitarist, Izzy Stradlin. He didn’t take up the offer.

Dave Navarro joined the Red-Hot Chili Peppers in 1993, playing in live performances and contributing to their album, “One Hot Minute” released in 1995. It sold more than eight million copies across the world. The band later released a single “Love Rollercoaster” for “Beavis and Butthead Do America”.

Navarro played with Red Hot Chili Peppers at Woodstock in 1994. In the same year, he backed Alanis Morrisette in “You Ought to Know” on the album “Jagged Little Pill”. He also remixed Janet Jackson’s song “What’ll I Do” for her album, “Janet Remixed”.

Jane’s Addiction put together the Relapse tour in 1997 and Navarro went along with them. By 1998 Dave Navarro had relapsed into his heroin addiction so the Red-Hot Chili Peppers dismissed him from the band.

In 2001, Dave Navarro released a solo album under the Capitol Records label. It was called “Trust No One”. It didn’t do as well as the fans had expected.

Navarro played in the Michael Jackson performance of “Black or White” at the Apollo Theatre in 2002. Around this time, he started work with the hard-rock supergroup, Freddy Camp.

Not long afterward, Jane’s Addiction reformed. They released the album “Strays” in 2003 and took it on the road on a tour for another Lollapalooza.

Jane’s Addiction broke up again in 2004 for much the same reason as it had in the 1990s. Though they had broken up, the band continued to play together at various concerts.

The band reunited with all its original members again in 2008. They released two songs, “Whores” and Chip Along”. These songs were not original as they had appeared on the band’s first album. It was at this time that the band received the NME magazine award, “Godlike Genius Award for Services to Music”.

In 2009, Jane’s Addiction and Nine Inch Nails paired up for a world tour. Fans dubbed the tour the NIN/JA tour. In August of that year, Navarro joined Spirits in the Sky on a tour of Southern California.

In 2011 Jane’s Addiction came together once again to make an album, “The Great Escape Artist”. A tour followed.

In 2005, Dave Navarro worked with author, Neil Strauss, to write the book, “Don’t Try This at Home: A Day in the Life of Dave Navarro”. It was a huge success and quickly became a Los Angeles Times Best Seller.

Dave Navarro made his reality television debut with his soon-to-be third wife, Carmen Electra, in a reality show about their wedding. It was called “Til Death Do Us Part”. It ran for seven series on MTV and ended with their wedding.

He followed this in 2005 with Rock Star: INXS. The show had contestants competing to join the band INXS. Navarro hosted the show and another Rock Star: Supernova in 2006.

At this time Navarro also ran his own internet radio station, starting an internet chat show called Dave Navarro’s Spread TV. It was a download on iTunes and streamed on ManiaTV.com. Navarro posted the videos on his YouTube channel so fans could access the show on YouTube.

Between 2012 and 2020, Navarro hosted another reality television program called Ink Master. It was a show where contestants competed with one another to make the best tattoos for their clients.

Other Guitarists We Recommended Reading:
Jeffrey Parker Net Worth| How Much Does He Make?

Dave Navarro appeared in the drama series, “Sons of Anarchy” in 2012 and so began his acting career. He later took a guest role in “Law and Order: SVU”. He has also appeared in an episode of “Talking Dead”.

He directed “Broken” an adult movie starring Sasha Grey. It was hoped that this would be the first in a series of such movies. The movie won the Best High End All Sex Release at the AVN Awards in 2008.

Dave Navarro is proud of his intricate tattoos and he also stands for good causes. In 2010 he stripped down for the “Ink Not Mink” campaign. The anti-fur campaign was led by PETA. He posed naked again in 2013 for PETA’s anti-animal testing campaign. 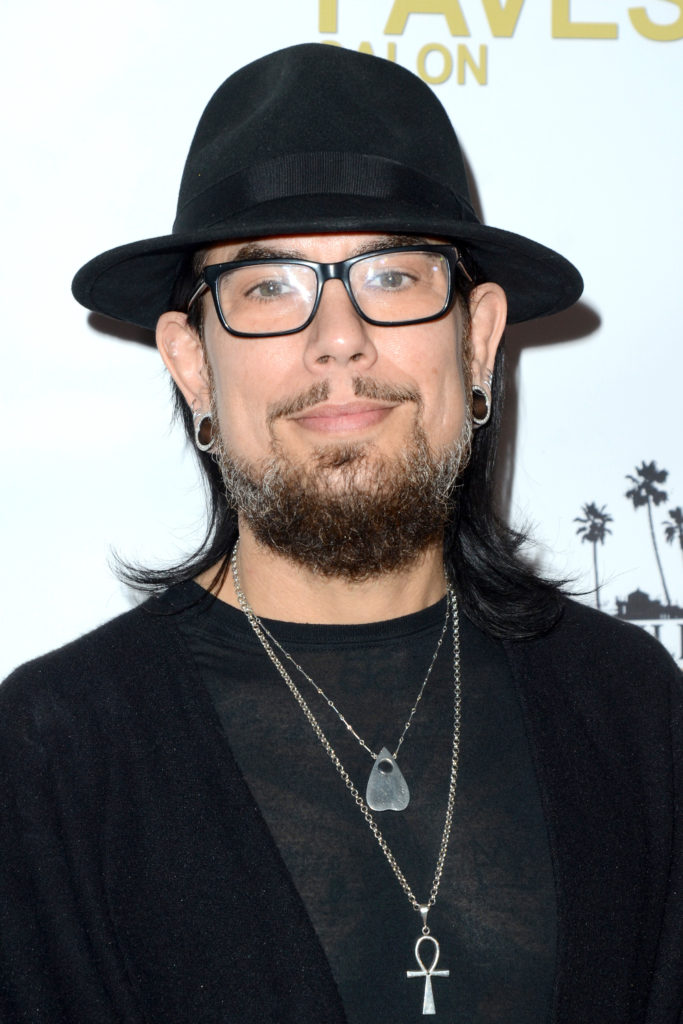 Dave Navarro has been married three times. He married Tania Goddard Saylor in 1990. They had been dating since 1988. He divorced the celebrity makeup artist after two short years in 1992.

On the 15th of October 1994 he married Rhian Gittins, the marriage was annulled five days later.

His most famous marriage was to model and actress Carmen Electra who he wed in November 2003. The pair divorced in 2007.

Navarro has been dating 43-year-old Andrea Tantaros since 2015. Tantaros is a political analyst and commentator on Fox News. Navarro has dated a string of women over the years but it looks like he may have settled down now. There are even rumors of marriage in the media.

Dave Navarro has spent a lifetime fighting drug addiction. His drugs of choice are heroin and cocaine. Though his mother’s death didn’t help, Navarro has said that his drug problem started before her murder. His documentary, “Mourning Son” covered his problems in graphic detail. He stopped using cocaine and heroin in the late 1990s. He says he has been completely drug-free since 2012.

Dave Navarro’s net worth estimate is around $25 million. He has made most of his money through music, though he has also acted. His book was very successful and must have made him a fair amount of money.

David Navarro net worth reflects how he is a man of many talents and He has managed to navigate personal tragedy and mental health issues, making a small fortune along the way. With his work ethic, we’re sure that we will see plenty more of this talented musician and entertainer.