American rapper Waka Flocka Flame is regarded as one of the top commercial rap breakout artists in the early 2010s. A successful artist, he is widely known for a terrific solo career with several hits and his work in collaboration with other famous rappers.

Featured several times in the Top 20 on the Billboard R&B/hip-hop charts, he has had an illustrious career and enjoys a significant fanbase. If you’ve been a fan of his work, you might know a few things about him.

But do you know about his net worth and what his early life was like? This post will cover several things about Waka Flocka’s net worth, his remarkable career, and other details that you might find interesting. 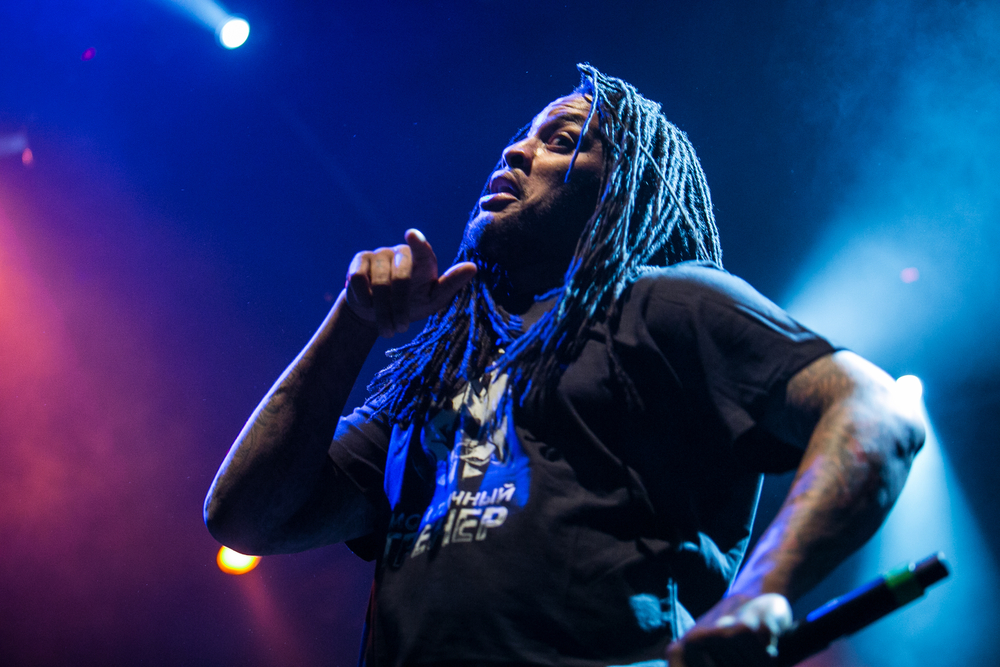 Waka Flocka is estimated to have a net worth of $7 million as of writing in 2021. Most of his net worth is attributed to leading a successful career as a hip-hop artist and through acting, appearing in multiple reality shows through the years.

Wacka Flocka Flame’s work with several notable artists has also contributed to his fame. Interestingly enough, the stage name we all know him by was given to him by Gucci Mane, one of the artists he has collaborated with during his career.

Most people know him only by his stage name, but Waka Flocka’s real name is Juaquin James Malphurs. Waka is an Atlanta-based artist, but he hails from South Jamaica. Juaqin’s cousin gave him the nickname ‘Waka’ which is a catchphrase used by Fozzie Bear from the Muppets.

Gucci Mane, later on, dubbed him Waka Flocka Flame, and that’s how he got the stage name that we all know him by today.

Waka Flocka Flame was born on May 31, 1986, in South Jamaica. Waka’s father, James Malphurs, was the owner of a restaurant in South Jamaica and hailed from there. His mother is Debra Antney, a well-known figure in the music industry.

She is the former CEO and manager for the popular artist management firm called So Icey/Mizay Entertainment. His family moved to Riverdale, Georgia a little while after his birth.

Considering the fact that his mother represented popular artists like Gucci Mane himself, it would be easy to assume that entering the music industry was only the natural course for Waka to pursue. However, he rarely showed any interest in becoming a musician in his early years. Instead, he preferred playing basketball.

Despite belonging to an affluent family, Waka’s early years also saw him engage in gang activities, handing out with local gang members, spending lots of time on the streets of Atlanta. This turning point came in his life when his older brother died in an unfortunate car accident when Waka was 14.

There’s little information available about his schooling, but we do know that he attended South River High School in Riverdale before switching to Hephzibah High School in Hephzibah, Georgia. However, he eventually dropped out after three years of attending Hephzibah High, as his interests shifted to spending time with local gang members in Atlanta.

Waka Flocka’s Career In A Nutshell

From hanging out with gang members in Atlanta to pursuing a career as a rapper, the key point in Waka’s life is believed to be the time he attended Gucci Mane’s concert when he was 19 years old. At the time, Waka’s mother represented Gucci.

Waka soon started working on his own music, collaborating with a local producer Tay Beatz to piece together the mixtape that would go on to launch Waka’s career in the music industry.

At this point in time, he was only known as “Waka,” the name his cousin gave him. He released Salute Me or Shoot Me Vol. 1 in 2008, the very album that contains “O Let’s Do It,” a song that became a little well known. Flocka was not an overnight success through that album, but it certainly proved that he had potential.

Gucci Mane was one of the people who saw that potential in him. Gucci featured him on several tracks and Waka Flocka became a member of Gucci’s “1017 Brick Squad” that featured Gucci himself, French Montana, OJ Da Juiceman, and Wooh Da Kid.

2010 saw Waka Flocka release what would be effectively the major album to kick off his solo career. Flockaveli was the result of spending years learning under Gucci Mane and the success of his first solo album showed the world what he can do.

Flockaveli debuted on the Billboard Hot 200 at #6, receiving loads of excellent reviews and selling over 50,000 copies in the first week alone. Waka Flocka Flame had officially announced himself to the world.

Two years later, Waka released his second album called Triple F Life: Friends, Fans & Family. Some of the most notable bangers he’s come out with include:

Gucci Mane stopped working with Waka’s mother and that led to suspicions that it affected his professional relationship with Waka, but the two rappers maintained a cordial relationship as part of the 1017 Brick Squad as noted in their interviews. However, it was worth noting that the two never spoke to each other after Waka’s mother was fired by Gucci Mane.

January 2013 saw Waka announce that he has finished working on his third album called Flockaveli 2.  The album was going to release on October 5, 2013, featuring the likes of Timbaland and Wyclef Jean, but the release was postponed to January 2014.

Unfortunately, the release date kept moving forward, and it wasn’t until 2020 that Waka said his album would release later in the year. Flockaveli 2 did not release even in 2020.

Waka Flocka continued creating mixtapes despite not releasing new music over the years. DucFlocka Rant 2 was one of the notable mixtapes he released in February 2013, featuring Lil Wayne, Ace Hood, French Montana, and Gucci Mane himself. Waka then released DucFlocka Rant: Halftime Show as a sequel to the mixtape, featuring T.I.

Some of the popular mixtapes that he has released over the years include:

March 15, 2013, saw Gucci Mane announce that Waka Flocka was no longer be a part of his 1017 Brick Squad Records. The announcement caused quite a stir, leading to an argument between the two rappers on Twitter. It was reported later on that Gucci Mane’s account was hacked.

March 27, 2013, saw Waka give an interview to MTV Jams saying that he would never work with Gucci Mane again. Both rappers refused to explain the reason for the fallout.

Gucci alleged that these individuals breached their contracts, conducted fraud, withheld royalties, inflated label expenditure expenses, and he accused them of racketeering. Waka Flocka later announced on Twitter in 2014 that the two have resolved their issues.

Waka Flocka’s career achievements include several accolades, including awards and nominations, including:

No doubt that helped to kick-start Waka Flocka’s net worth on the right trajectory.

Waka Flocka married Tammy Rivera, a fashion designer, singer, businesswoman, and TV personality, in 2014. She was also part of the VH1 reality TV show Love & Hip Hop: Atlanta. The two live in Sandy Springs, Atlanta. Waka Flocka and his wife do not have any children together, but he has helped Tammy raise her daughter, Charlie.

KayO Redd, Waka Flocka’s brother, passed away in 2013. KayO was a rapper himself and his unfortunate death appeared to be a suicide from a self-inflicted gunshot wound. Waka tweeted on December 29, 2013, that his brother committed suicide, later on tweeting “Ya Big Brother love you Kayo.”

When speaking about his brother’s death, Waka said that KayO had been dealing with a lot of stress, leading up to his suicide in his home in Henry County, Georgia.

Waka Flocka is 1.93 m tall (6 ft and 1 inch). He weighs 97 kg and is 35 years old at writing. He does not seem to have any known health conditions. Waka’s brother’s death also saw him decide to become a vegan because he felt that he needs to detox and choose a healthier lifestyle.

Waka Flocka has released numerous songs over the course of his career. He has also made guest appearances in several songs. His debut album Flockavelli features a total of 17 tracks. It also has two bonus tracks. His second album Triple F Life has 15 tracks. The deluxe edition of the album also has four bonus tracks. Besides this, here’s a list of singles Waka Flocka has released as the lead artist:

Some of the songs he has featured in include:

We hope you found this article on Waka Flocka’s net worth, career, and family to be useful. Despite being involved in controversies in the past, Waka Flocka is a popular hip-hop artist with a sizeable fanbase that is eagerly awaiting the release of his new album. Like his other albums and singles, we can expect this one to be a hit, as well.

Are you interested in learning about the net worth, career, and personal life of other celebrities? Then keep following us for the latest updates!