Vicente Fernandez, also known fondly as “The Idol of Mexico,” was one of the world’s most beloved singers of all time. Vicente Fernandez net worth was approximately $25 million.

Fernandez had released over 50 albums in his career and won numerous awards, including four Grammy Awards. He had also sold more than 50 million records worldwide, and his tours were almost always sold out.

Who is Vicente Fernandez

Vicente Fernandez was one of the most iconic and well-known Mexican singers and actors of all time. He performed for more than 50 years in his career.

He is also a successful actor, having starred in 30 films. Out of these, 18 were directed by Rafael Villaseñor Kuri. For the most part, the movies Vicente starred in showcased one of his new songs, which would typically share the same title as the movie.

Fernandez is considered a cultural icon in Mexico, and his music has been praised by critics worldwide. His popularity has led Vicente Fernandez net worth to grow so much.

Want to learn more about other singers? Check out Josh Groban and Jessica Simpson here.

Vicente Fernandez net worth was estimated to be about $25 million, and his annual salary was approximately $2 million.

Fernandez was one of the most successful Mexican singers, so most of Vicente Fernandez net worth came from singing, selling albums and throwing large-scale concerts. Fernandez charged anywhere from $250,000 to $1 million for a private concert.

Besides this, Vicente Fernandez net worth increased from his acting career and several films along with other big-name actors and actresses.

Fernandez also made money from endorsement deals. He had been sponsored by brands like Ford, Pepsi, Coca-Cola, and Samsung. As an example, in 2012, he signed an agreement with Banamex that was reportedly worth $10 million.

When Fernandez was 6 or 7 years old, his mother would take him to watch movies starring Jorge Negrete and Pedro Infante. Inspired by them, he once told his mother that, when he was an adult, he wanted to be just like the movie stars.

After that, at the age of 8, he developed a taste for music and was given a guitar. He learned how to play it, also learning traditional Mexican music alongside it.

It was difficult for Fernández’s family to support themselves by selling cows’ milk on their ranch, causing them to move into a larger town, Tijuana, after Vicente completed his elementary studies.

Fernández, unfortunately, had to drop out of his high school studies as his family could no longer support themselves, and he began working any job he could find, such as being a painter, cabinetmaker, and bricklayer.

Construction companies would especially reach out to hire Vicente, as he would always sing while working, thus boosting morale for all the workers. These were the beginning days of Vicente as a singer, which blossomed when he joined his uncle at his restaurant, initially as a cashier.

This is the time he began to sing while working at the restaurant, and then at all types of restaurants and weddings. He then joined a few mariachi groups like Mariachi de José Luis Aguilar and Mariachi Amanecer de Pepe Mendoza, however, he wasn’t recognized locally until after participating in “Amanecer Tapatío” (a radio show in Jalisco).

When he was 21 years old, he appeared on his first TV show, “La calandria musical,” which, after “Amanecer Tapatío,” was also a leading milestone towards Vicente’s success.

In 1965, Fernandez shifted to Mexico City so he could seek opportunities in the music industry. Javier Solís, the prominent singer at the time, took up much of the spotlight, making any offer Vicente approached recording labels with ultimately unsuccessful. It was only at the premature passing of Solis that Vicente got his first break.

Some of his songs from these beginning albums, such as “Perdóname” and “Tu Camino y El Mío,” were met with moderate success. However, his career wouldn’t take off until a decade later, with the release of “Volver Volver.” 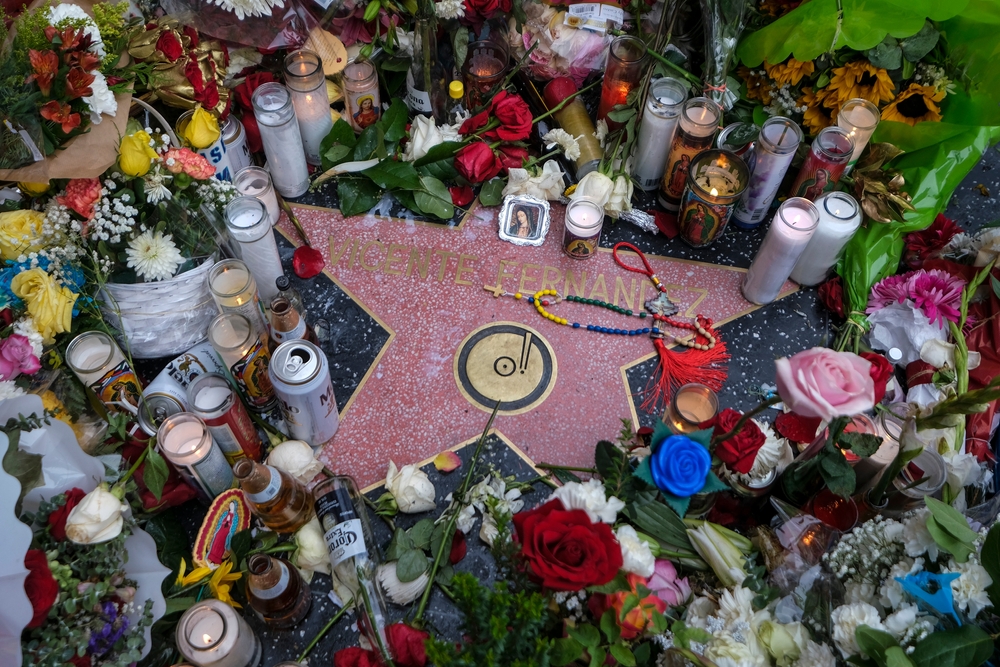 His stature allowed him to command the stage when performing, and his powerful voice easily filled the arenas and stadiums.

Vicente Fernandez was born on February 17, 1940, in the small village of Huentitán El Alto, Jalisco. His father was a rancher, and his mother was a housewife. Fernandez belonged to a low-income family, but even from a young age, he was very fond of music and acting.

In 1973, with the death of one of the great ranchera icons, José Alfredo Jiménez, Vicente finally took the spotlight. “La Voz Que Estabas Esperando” – his next album, and the following albums, sold millions of copies.

In the 1980s, Fernández’s music went through a change. Originally, he sang bolero ranchero-styled music, however, due to many immigrants coming to America, he switched to a ranchera style. An example of this change is highlighted in the “Los Mandados” song, praising the Mexicans who had migrated to the United States.

Fernández built his ranch, Los 3 Potrillos, during these years, which later became his music production house.

In 1984, Vicente was welcomed with open arms at the Plaza de Toros México, where he gave a concert to 54,000 eager fans. And in 1987, Vicente had the opportunity to debut his first concert tour outside of his home grounds in the US and Mexico, traveling to places such as Columbia and Bolivia.

Vicente was nicknamed the “Mexican Sinatra” by US media, having gained so much popularity with locals far and wide. It was these years in Vicente’s career where he musically peaked, experiencing the most of his success.

Fernández, along with with his son, Alejandro, launched the Lazos Invincibles concert tour in 2001. Then, a few years later, Fernandez released “La tragedia del vaquero,” in 2006. The album earned a platinum rating in the United States.

In 2008, Vicente Fernándezreceived another Latin Grammy award with his album “Para Siempre,” which was released one year previously, in 2007. What really stood out among his albums, however, was his next album, “Prime Fila.”

On top of this, “Prime Fila” ranked at the first position on the Billboard for seven consecutive weeks, ultimately earning another Latin Grammy award for “Best Ranchero Album.”

On February 14, 2009, Fernández performed a concert in Mexico City at the Zócalo. About 220,000 people attended the show, breaking all previous attendance records. Fernández released the album “Necesito de ti” in the same year, earning him a Latin Grammy as well as a Grammy.

On February 8th, 2012, Fernández mentioned in a press conference that he intended to stop working on the stage. However, Fernández said that he would not quit recording albums. According to him, this decision was not for any medical reasons, but Vicente had decided he wanted to start enjoying his work: singing, and recording.

On April 16th, 2016, the fated farewell concert was held at Estadio Azteca, titled “Un Azteca en el Azteca,” with free admission. Over 80,000 fans gathered at Fernández’s farewell concert, where he entertained the audience for more than four hours, the most extended concert Vicente had ever done.

Fernández collected the roughly 40 songs he sang during the show on an album with the same title as the concert and earned a Grammy Award for this album in 2017.

Even after retiring from the stage, Fernández did not stop recording songs and albums. His album “Más romántico que nunca” was released in 2018, along with “A mis 80s” in 2020. Fernández won his ninth Latin Grammy Award for these two albums in 2021.

After a musical career extending over 50 years, Vicente gave the world over 300 songs, and 80 albums, and sold over 65 million records.

On December 27, 1963, Fernández married María del Refugio Abarca, who was the sister of one of his close friends. The couple had their first son named Vicente Jr., who was a premature baby and was incubated at home. During the same year, his mother, who was 47 at the time, passed away because of cancer.

Two of Fernández’s sons followed their father’s footsteps and became singers. Vicente used to sing with them on many occasions. For his farewell concert, he went on stage for the last time and sang with his third son, Alejandro.

When Vicente’s Son Was Kidnapped

In 1998, Mocho Dedos kidnapped Fernández’s elder son, Vicente Jr. They demanded ransom money of $5 million. Fernández gave $3.2 million dollars to Mocho Dedos to free his son. After 121 days, his son was found outside the family ranch, with two of Vicente Jr.’s fingers amputated.

During this challenging time, Fernández continued to sing at concerts with Alejandro, his other son. He commented in an interview with Billboard that during the four months his son was missing, he didn’t say a word publically about it, even though his audience knew. He would sing, and then he would return home to his hotel and cry for his son. When Vicente Jr. finally was returned, both Vicente and his audience were exuberant.

The kidnappers were sentenced to prison for 50 years in 2008.

Among many examples of Vicente’s charity work, one that stands out is his work with the charity song “Somos El Mundo 25 Por Haiti,” a special project directed towards raising awareness for the earthquake in Haiti in 2010. Vicente was especially chosen with 50 other singers to sing in the cover song, versioned after “We Are the World.” 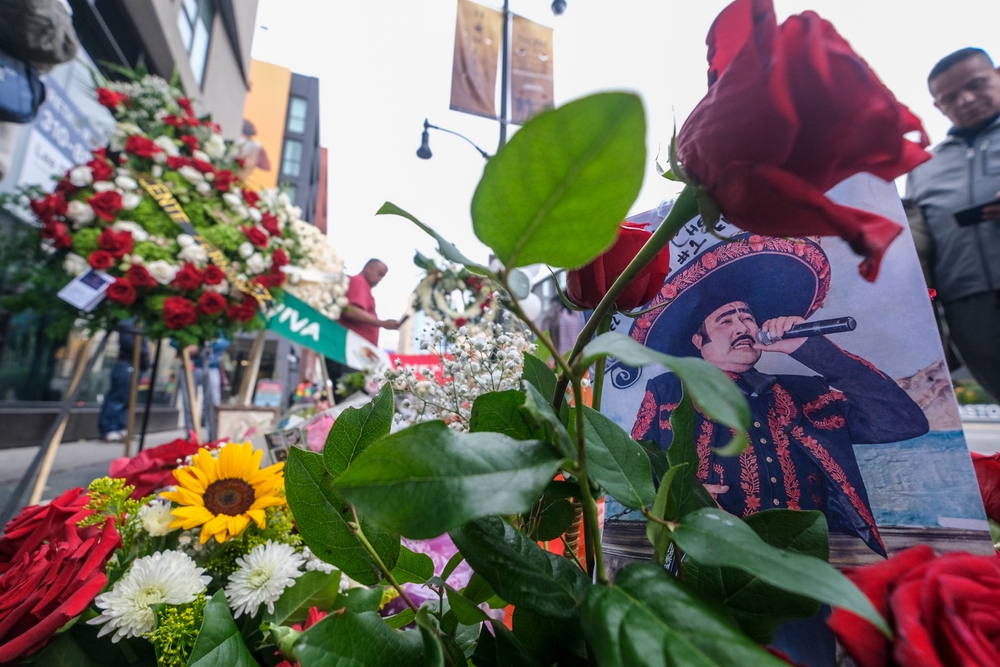 Vicente was admitted to the intensive care unit at the hospital for a fall he suffered at his ranch, injuring his spine. Two weeks later, he was diagnosed with Guillain-Barré syndrome. Doctors began treatment right away, and Vicente left intensive care after his condition improved, however, he was soon admitted to intensive care again following a case of pneumonia. And on December 12th, 2021, Vicente sadly passed away due to complications from his injuries.