Steven Seagal Net Worth – How Rich Is The Film And TV Actor?

Who is Steven Seagal? 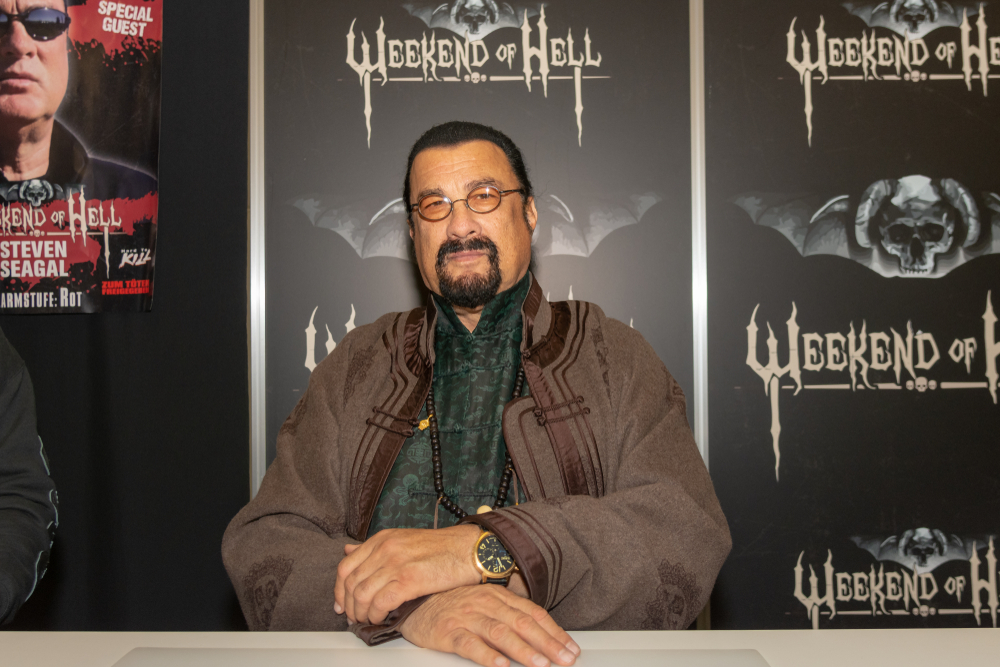 Seven Seagal (whose middle name is Frederic) is an actor, martial artist, and screen writer. Although he later gained fame as a Hollywood actor, Steven Seagal at first lived in Japan as a martial arts instructor. His ranking in aikido is 7th dan black belt, and he was the first non-Japanese person to ever run an aikido dojo in Japan.

Afterwards, Steven Seagal became famous for films such as Above the Law, Under Siege, The Patriot, and eventually a slew of direct to video action films, which he became known for doing. He also starred in the reality show Steven Seagal: Lawman about his time as a deputy sheriff.

Steven Seagal is also a musician and guitarist who’s put out two albums, Mojo Priest and Songs from the Crystal Cave. Steven Seagal is also a strong proponent of Russian leader Vladimir Putin and gained Russian citizenship in 2016. He has been accused of sexual assault and harassment numerous times throughout the years. 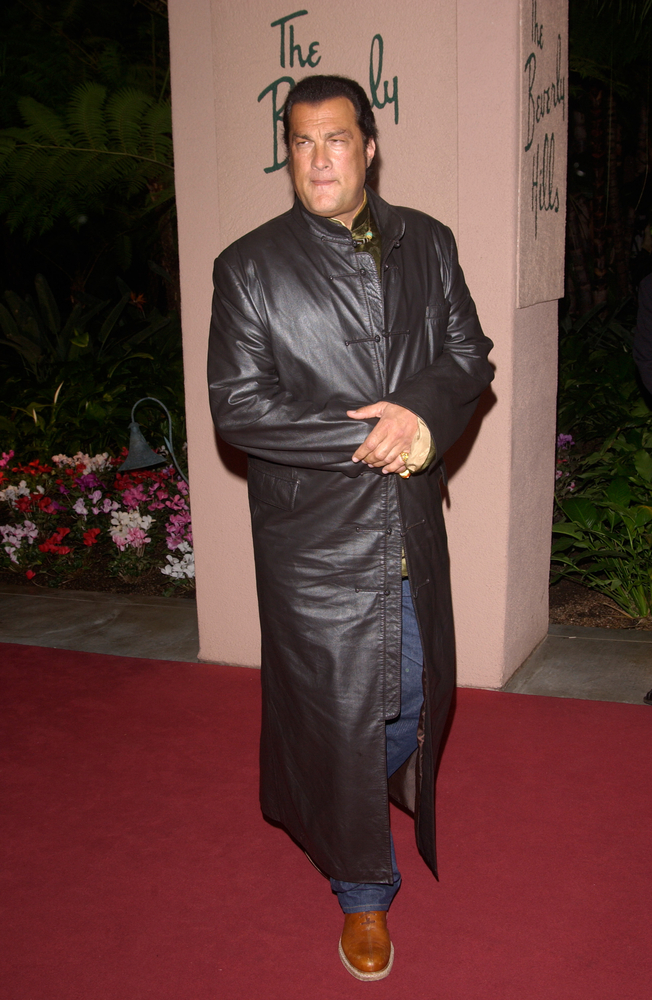 Steven Seagal’s first film was Above the Law, which filmed in 1987 under the direction of Andrew Davis. It was a box office hit, and it set the stage for a bunch of other hit action films for Steven Seagal, which included Marked for Death, Out for Justice, and Hard to Kill.

One of his biggest films was Under Siege in 1992, which again had Andrew Davis as a director. Steven Seagal is notorious for being what the executive producer of Saturday Night Live, Lorne Michaels, has called the worst guest host in the entire history of the series.

He was accused of being humorless, rude and abusive to the rest of SNL’s cast as well as the writers, and egotistical. They even said he refused to do one sketch simply because the comedy characters in it, the muscle building Hans and Franz were going to say in it that they would be able to beat him up.

Later on, this was referenced on the show itself in a meta monologue with actor Nicolas Cage hosted. Nicolas Cage’s line had him say he was worried that the audience would think he was the “biggest jerk who’s ever been on the show”, to which Lorne Michael replied on the air, “No, no. That would be Steven Seagal.”

In 1994, Steven Seagal both starred in and directed the film On Deadly Ground, which also featured Billy Bob Thornton, R. Lee Ermey, and Michael Caine. The film was centered on spiritual and environmental themes rather than his typical action cop milieu. It got bad reviews across the board.

Next up in 1995 was a sequel to Under Siege called Under Siege 2: Dark Territory. Then he had a small role in Kurt Russell’s Executive Decision in 1996, followed by The Glimmer Man, a cop drama. 1997 saw him star as an Environmental Protection Agency Office of Enforcement agent in Fire Down Below, another box office flop for him.

In 1998, Steven Seagal made a direct to video debut called The Patriot, yet another thriller centered on the environment. He produced the film and largely shot it at his own Montana farm.

He then produced the film Prince of Central Park, followed up by returning to the big screen in 2001 with Exit Wounds. It was a big hit despite having less martial arts than usual for a Steven Seagal film. His next two films, however, didn’t do well. The film Ticker went straight to DVD, and Half Past Dead did poorly in cinemas.

The last theatrical release Steven Seagal had was Robert Rodriguez’s machete, in the villain role. Ever since then, every single Steven Seagal film from 2001 onwards has been a direct to video film, at least in the States, with some of them being released theatrically in other countries.

Steven Seagal starred in, produced, and sometimes wrote films including Belly of the Beast, Black Dawn, Submerged, Out of Reach, Urban Justice, Kill Switch, Against the Dark, Pistol Whipped, The Keeper, Born to Raise Hell, A Dangerous Man, and Driven to Kill.

Starting in 2009, Steven Seagal had a reality show on the A&E Network called Steven Seagal: Lawman, in which cameras followed him acting a sheriff’s deputy in Louisiana.

Steven Seagal’s direct to video movies in the 2010s we’re Maximum Conviction, Gutshot Straight, Force of Execution, Code of Honor, China Salesman, Cartels, The Perfect Weapon, The Asian Connection, and Sniper: Special Ops. Although he often only played minor roles in these, he got top billing and they capitalized on him.

Starting in 2011, Steven Seagal starred in and produced a show called True Justice. There are many running themes in Steven Seagal’s oeuvre. His characters are often former Black Ops, Special Forces, or Central Intelligence Agency.

His characters are often also practically invulnerable physically. No character can match them, and they always overpower their opposition without breaking a sweat or getting injured.

Steven Seagal is also a musician. He plays the guitar and writes songs, a number of which have appeared in films of his, including Ticker and Fire Down. He also has a classic guitar collection of guitars owned by famous and notable musicians.

Steven Seagal was born on the tenth of April in the year 1952 in the town of Lansing, Michigan, United States of America. His mom Patricia was a medical technician and Irish, whereas his dad Samuel was a math teacher of Russian Jewish descent. At the age of 5, his parents moved him to Fullerton, California, USA.

Steven Seagal got his high school degree from Buena Park High School, and afterwards went to Fullerton College, which was also in the area. He spent much of his teenager years being obsessed with rock ‘n roll. He also had a job working at a dojo with a friendly Japanese man who encouraged him to visit his country.

Steven Seagal ended up moving to Japan for a period of time from about 1971-1973, returning to California by 1974. There, he became acquainted with Miyako Fujitani, who was a 2nd degree black belt as well as an aikido master’s daughter from Osaka. When she flew back to Osaka, he came with her.

Living together in Japan, they got married and had two children, Kentaro and Ayako. He taught at her family’s school, becoming the first foreigner to the country to basically run a dojo there.

The two of them opened another dojo, this time in North Hollywood in California, eventually relocating it to West Hollywood. Steven Seagal left his student in charge, and the two remained connected until 1997.

Steven Seagal has had many relationships over the years. His first wife was Miyako Fujitani, with whom he had two children, Kentaro Seagal, and Ayako Fujitani. He then left her and, when he got back to the States, became involved with Kelly LeBrock, a model and actress. Their affair led to his divorce from Miyako.

By 1984, Steven Seagal was married to Adrienne La Russia, an actress, but the marriage was swiftly annulled that same year as his earlier divorce apparently hadn’t been finalized yet. Meanwhile Kelly LeBrock gave birth to his 3rd kid, Annaliza. In 1987, he and Kelly LeBrock got married and eventually had 2 more kids, Dominic and Arissa.

They got divorced in 1994. Today, Steven Seagal is married to Erdenetuya Batsukh, a Mongolian woman who goes by Elle. They met in 2001. They had a child together, Kunzang. All in all, Steven Seagal has 7 children and 3 grandchildren.

Steven Seagal’s religion is Buddhism. Steven Seagal is a joint citizen of the United States, Russia, and Serbia. Steven Seagal has called himself a personal friend and even brother of Russian President Vladimir Putin, but Putin denies that.

Even as recently as March of 2022, Steven Seagal threw himself a birthday party in Moscow during Russia’s Ukraine invasion. Many of the attendees were close comrades to Putin, some of whom had received international sanctions.

In 2018, another actress accused him of sexual assault. Meanwhile, another woman came forward in 2018, accusing him of raping her in 1993.

He’s also had many conflicts with various stuntmen over the years who’ve accused of deliberately mistreating them and hitting them when he wasn’t meant to. Even actor John Leguizamo has accused him of knocking him against a wall when he perceived him as having laughed at him.

Steven Seagal has accounts on many of the major social media platforms, however his most popular by far is his Facebook, which perhaps indicates the older, Conservative base that likely make up most of his fans today. Steven Seagal uses his accounts to connect with his fans and boost Steven Seagal net worth.

Steven Seagal mainly uses his Facebook account to connect with his fanbase, plug his latest projects, and sell his merchandise, which helps boost Steven Seagal net worth in turn.

Steven Seagal mainly uses his Twitter account to connect with his fans, provide info about his latest projects, and sell his merch, which helps Steven Seagal net worth continue to grow.

Steven Seagal mainly uses his Twitter account to connect with his fans, provide info about his latest projects, and sell his merch, which helps Steven Seagal net worth continue to grow.

Steven Seagal does not have an official public professional LinkedIn account.

Should this change at any point in the future and Steven Seagal choose to sign up for LinkedIn, we will be sure to update this page with that information. Our goal is to keep our readers informed of all of the latest news about Steven Seagal net worth, career, and life.

Steven Seagal does not have an official public verified TikTok account as of the present time.

Should this change at any point in the future and Steven Seagal choose to sign up for an official public verified TikTok account, we will be sure to update this page with that information. Our goal is to keep our readers informed of all of the latest news about Steven Seagal net worth, career, and life.