Steve Harvey Net Worth – How Rich Is He Now?

Who is Steve Harvey? 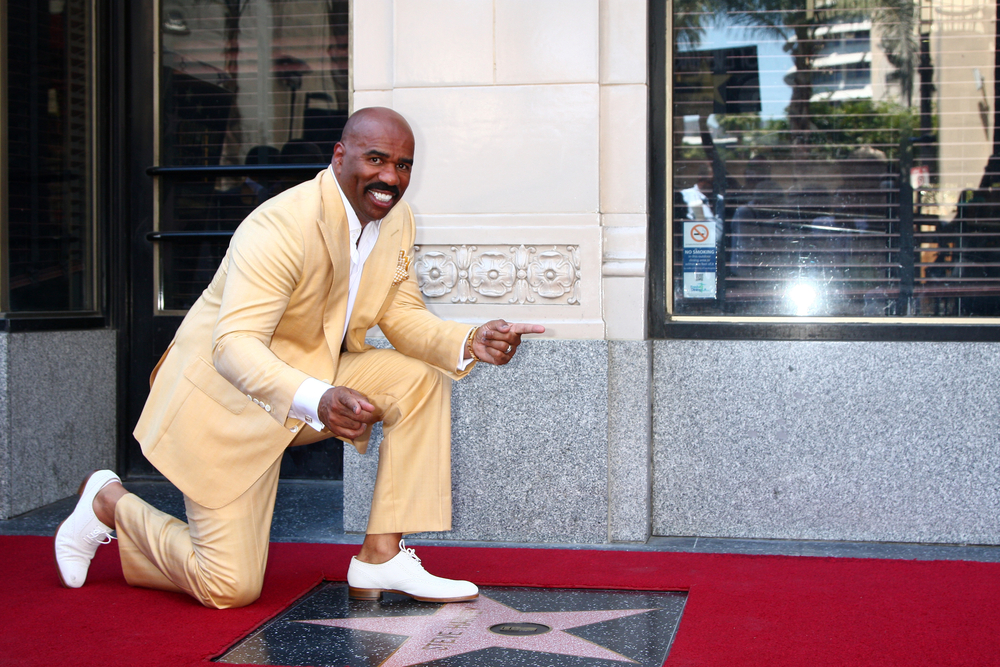 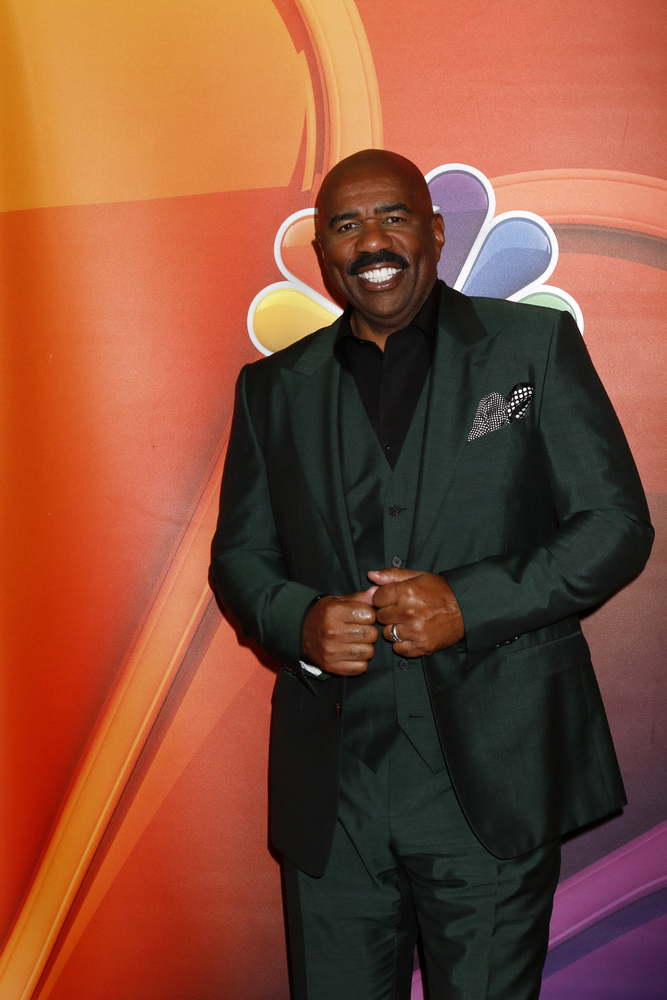 Over the course of his life, Steve Harvey has had a surprising variety of jobs: mailman, carpet cleaner, insurance salesman, autoworker, boxer, and standup comedian. Steve Harvey had his standup debut in Cleveland, Ohio on the eighth of October in the year 1985 at a comedy club called Hilarities.

For three years in the latter years of the 80s, Steve Harvey was so destitute that he didn’t have a home, sleeping in his car whenever hotel accommodation wasn’t included in a comedy gig he’d booked. When this happened, he’d be forced to clean off either in showers by nearby hotel swimming pools or in gas station restrooms.

In 1990, Steve Harvey’s fortunes began to turn around when he was chosen as a finalist in the Johnnie Walker National Comedy Search, which ultimately led to him landing the job as the host of It’s Showtime at the Apollo, filmed at the legendary Apollo Theatre in Harlem, Manhattan, New York City, United States of America.

Additionally, Steve Harvey was cast in the lead role of Me and the Boys, a show for ABC that didn’t last long. Later on, he headlined The Steve Harvey Show on the WB between the years 1996 and 2002. The show gained a great deal of popularity although never got real media attention other than within the Black community.

In 1997, Steve Harvey joined the Kings of Comedy tour with other prominent male African American comedians Bernie Mac, D.L. Hughley, and Cedric the Entertainer. It became the most financially successful comedy tour in entertainment history, making eighteen million the first year and nineteen million the second.

Since 2000, Steve Harvey has hosted a morning radio show called The Steve Harvey Morning Show originally in conjunction with Radio One, Inc.

In 2006, Steve Harvey dropped a comedy special called Steve Harvey: Don’t Trip… He Ain’t Through with Me. In 2008, Steve Harvey hosted the Disney Dreamers Academy at Disney World, an enrichment program for teenagers.

In 2009, Steve Harvey put out his first book, Act Like a Lady, Think Like a Man. It was a New York Times bestseller, being on the list for sixty four weeks, twenty three of which it was in first place. It was turned into a 2012 film called Think Like a Man.

In 2010, Steve Harvey began to host the classic afternoon syndicated game show Family Feud, and he is now the show’s longest running host. He also hosts the spinoff Celebrity Family Feud over the summer.

In 2012, Steve Harvey decided to retire from standup after twenty seven years, performing his last show in Las Vegas at the MGM Grand, the set broadcast on pay per view as well. He also began a talk show simply called Steve Harvey.

In 2013, Steve Harvey became the first person to be nominated twice as a host in the same year at the Daytime Emmys, one for Game Show Host and one for Talk Show Host. That same year, he also got a Hollywood Walk of Fame star.

In 2016, Steve Harvey dropped a book called Leap: Take the Leap of Faith to Achieve Your Life of Abundance. That same year, Steve Harvey was the host of a short series of It’s Showtime at the Apollo revival specials. Meanwhile, his talk show was canceled that year, but in its place came a new talk show called Steve, which began in 2017.

He also co-produced a series called Little Big Shots in 2016, a show where talented children interact with Steve Harvey. It ran from then till 2019.

In 2017, Steve Harvey set up a company called Steve Harvey Global, which encompass all of his various businesses including his TV, film, and digital content company East One Twelve, the various versions of Family Feud, including the African spinoff, and the Sand and Soul Festival. This annual festival is a comedy music event.
Steve Harvey also launched a company for special events called Harvey Events, run by his daughter Megan and her husband Kareem Hawthorne.

Steve Harvey was born as Broderick Stephen Harvey on the 17th of January in the year 1957 in the town of Welch, West Virginia, United States of America. Steve Harvey’s mom was Eloise Vera and his dad was Jesse Harvey, who worked as a coal miner. They named their son after Broderick Crawford, an actor on the television show Highway Patrol.

As a kid, Steve Harvey was a stutterer, something he had to work hard to get under control. When Steve Harvey was still young his family relocated to Cleveland, Ohio. After he became famous, the street they lived on was later renamed for him: Steve Harvey Way. This happened in 2015.

Steve Harvey attended Glenville High School as a teenager, graduating in 1974, and later going to Kent State University before transferring to West Virginia University, where he was an Omega Psi Phi member. 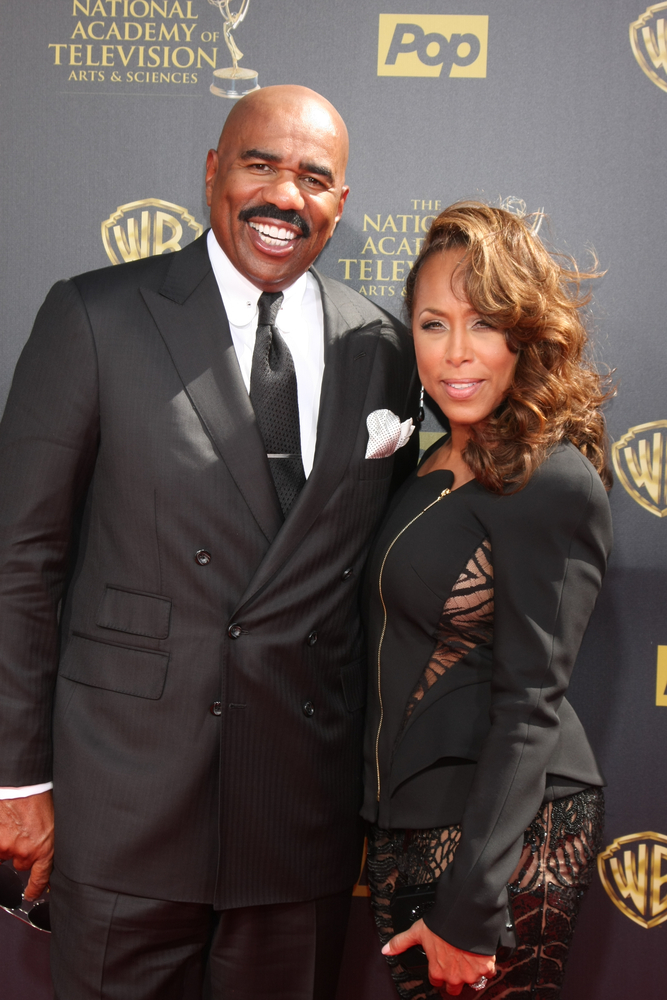 Steve Harvey has 7 kids from 3 marriages, 4 of them biological and the other 3 are stepkids. He was first married to Marcia Harvey, with whom he had three kids: Brandi, Karli, and Broderick Jr. Then he married Mary Shackelford, with whom he had one boy, Wynton. They got a divorce in 2005.

In 2007, Steve Harvey got married to Marjorie Bridges, who remains his wife to this day. Through her, he has 3 stepchildren: Lori, Jason, and Morgan, all of whom he adopted. Meanwhile, he also has 5 grandchildren, through both his stepkids and biological kids’ marriages.

Until 2018, Steve Harvey and his family lived in both Atlanta and Chicago. After that point, they relocated to Los Angeles, California, United States of America, where Steve Harvey films Family Feud and his talk show, and records his radio show.

Steve Harvey has an extremely healthy social media presence, especially on Facebook, where his massive following continues to help bolster his brand and extend Steve Harvey net worth and popularity.

Steve Harvey has an official public verified Facebook account. On this popular social media platform, Steve Harvey currently has an impressive 31 million followers as of the present time.

Steve Harvey mainly uses his official public verified Facebook account to connect with his fans with career updates, clips of and links to his work, and inspirational messages, as well as selling his merchandise connected to his various projects. Naturally, this also helps Steve Harvey net worth continue to thrive.

On this popular social media platform, Steve Harvey has nearly 5 million followers as of the present time. Steve Harvey is himself following 978 accounts in return currently.

Steve Harvey mainly uses his official public verified Twitter account to connect with his fans with his thoughts and observations, career updates, clips of and links to his work, inspirational messages, as well as selling his merchandise connected to his various projects. This also in turn helps contribute to Steve Harvey net worth.

Steve Harvey mainly uses his official public verified Instagram account to connect with his fans with photos of himself, career updates, clips of his work, as well as selling his merchandise connected to his various projects. This also of courses helps Steve Harvey net worth as well

Steve Harvey does not have an official public professional LinkedIn account. This is perhaps not surprising as people at Steve Harvey’s level of wealth and fame often don’t require the services that such a business networking platform provides.

With that said, should the situation ever change and Steve Harvey choose to sign up for a LinkedIn account, we will be sure to update this page with that information. After all, our goal is to keep our readers informed of all of the latest news about Steve Harvey net worth, career, and life.

Steve Harvey mainly uses his official public verified Twitter account to connect with his fans through short videos and clips from his shows. This naturally also adds to Steve Harvey net worth.