Romeo Santos Net Worth – How Much Is He Really Worth?

Who is Romeo Santos? 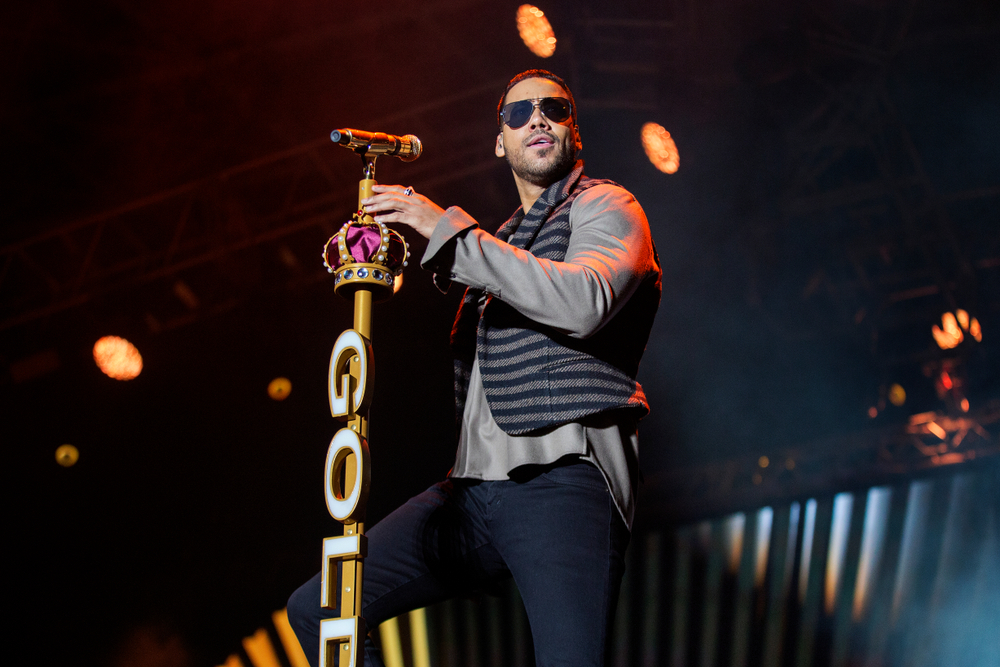 Romeo Santos, whose real name is Anthony Santos, is a singer, song writer, actor, and music producer who is most famous for being the lead singer of Aventura, a very famous bachata music group. Their most popular song, “Obsesión” was the top hit song in Italy for sixteen weeks.

After Aventura broke up a bunch of albums later, he has had a massively successful solo career. He has impressively had 16 songs make the number 1 slot on the Tropical Charts and 7 of them hit number 1 on Hot Latin Songs. He has sold over one hundred million singles and over forty million albums.

Romeo Santos is a mega star in the Latin music community, like Jenni Rivera. He was really the driving force behind the powerhouse Bachata music group, Aventura, being the lead singer and their main song writer, along with being a producer. Romeo Santos formed the group officially in 1996 with his cousin Henry Santos, and their friends Lenny Santos and his brother Max Santos.

Although they formed in 1996, they didn’t have their first album come out until 1999. Their goal was to blend the traditional bachata sound with those of R&B and hip hop in order to help introduce it to the mainstream and hopefully make it huge.

A few years later, their song “Obsesión” indeed hit it huge, hitting the number one spot in multiple charts, particularly in Europe. It was Italy’s top song on their charts for sixteen weeks running, and it also did enormously in Germany and France.

Over the course of the decade, Aventura put out five albums recorded in a studio, in an addition to three live albums, and three compilations. Some of their hugest hit songs in that time were “Los Infieles”, “Cuando Volverás”, “Amor de Madre”, “Un Beso”, “Por Un Segundo”, “El Perdedor”, and “Dile Al Amor”.

They were so successful that they were even invited to the White House to perform their music for President Barack Obama in 2009. Despite this, all of the members of Aventura were eager to strike out on their own, so they officially announced that the group would be, in Romeo’s words, “on pause to do individual projects” for the foreseeable future, in 2011.

With that said, they did reunite a few times over the years. All four guys came together on the twelfth of July in 2014 to all perform as a group again on one of the nights of Romeo Santos’ extremely successful sold out run of shows at Yankee Stadium.

At the end of 2015, they then announced a full set of Aventura reunion shows in New York City, New York, at the United Palace Theater. The shows ran for the entirety of February 2016. They sold out many of the nights. At the time, they plugged this series as the last time they’d ever reunite as Aventura.

Despite that, they announced yet another United States tour that was meant to happen in 2020, but it didn’t go on due to the COVID-19 pandemic. Returning to Aventura’s initial breakup, Romeo Santos signed a major deal with Sony in April 2011 shortly after announcing his intentions to begin his solo career.

His first album as a solo artist would be called Formula, Vol. 1, and the first single dropped the very month after his deal. The name of the song was “You”. “You” very quickly skyrocketed in the charts, making the top spot both on the Tropical Songs and the Hot Latin Songs charts almost instantly.

The next single off the album was called “Promise” and was a duet with Usher, the extremely famous rhythm and blues singer. Again, the song hit number one on the same charts.

The next year, Romeo Santos blew away all expectations by packing New York City, New York’s legendary venue Madison Square Garden, completely selling out the house for all three nights of the concert.

It was such a blockbuster performance that Sony decided to release it as a joint live CD/DVD called The King Stays King: Sold Out at Madison Square Garden, which itself went on to be a huge seller. Two years later, he managed to sell out the entirety of Yankee Stadium for another huge concert.

Never before Romeo Santos had a Latin performer ever headlined at the newer location for this legendary venue. The only previous Latin performers to ever perform at the original location of Yankee Stadium were a group called The Fania All-Stars, which was nearly thirty years earlier in 1973.

2014 was also the year Romeo Santos put out his next studio album, a follow up to his previous Formula, this one called Formula, Vol. 2. It featured a number of duets with famous singers including Nicki Minaj, Carlos Santana, Drake, Marc Anthony, and Tego Calderón, and even an appearance by the stand-up comic Kevin Hart.

Romeo Santos diverged from his Formula naming convention in 2017, when he put out his next album, Golden. This one featured Juan Luis Guerra, Nicky Jam, Ozuna, Swizz Beats, Jessie Reyes, Julio Iglesias, and Daddy Yankee. The first single was “Héroe Favorito”.

This album won him a Videoclip Award in 2018 for its music video called “Imitadora”, which won in the Best Bachata Video category. The album was also nominated by the prestigious Billboard Music Awards that same year in the Best Latin Album category, though it did not win.

Romeo Santos really went all out with this one, as it even featured a single that once again reunited Aventura. The song was called “Inmortal” and became the album’s debut single.

Later that year, Romeo Santos’ Utopía concert was a complete sell out at MetLife Stadium and led to another live album, namely Utopía Live from MetLife Stadium, as well as a film.

At the start of 2022, Romeo Santos made the announcement that Formula would become a trilogy, with the release of Formula Vol. 3.

Romeo Santos this entire time also pursued a bit of an acting career. In 2007, he and his fellow Aventura members all appeared as themselves in Sanky Panky, a Dominican film that was filmed in the Dominican Republic, as the men were performing there.

It was eight years later, however, that he had introduction to more traditional acting, when he appeared in Furious 7, the seventh film in the vastly successful The Fast and the Furious Franchise. Not long after, he voiced Early Bird in The Angry Birds Movie, based on the huge hit app game.

In 2013, he also made a special appearance on the legendary children’s show Sesame Street.

Romeo Santos was born Anthony Santos on the twenty first of July in 1981. The place he was both born and grew up was the famous Bronx borough of New York City. He was brought up without very much money, his working class Dominican father doing construction to make a living, and his Puerto Rican mother a stay at home mom.

Romeo Santos and his mother were very close when he was growing up, due to the fact that she was home with him all of the time. According to him, he was quite a bit of a mama’s boy.

Romeo Santos’ passion for singing started when he was still very young. He would sing in the choir of the church his family attended throughout his childhood. That’s where he discovered his immense vocal talent.

Due to his parents’ diverse Latin backgrounds, they also introduced him to many genres from their cultures around this time. This would come to provide huge inspiration. His parents particularly loved all sorts of tropical music such as merengue, salsa, and bachata, which would one day become his main genre.

Later on, he even formed a group with friends that he called “Los Teenagers”. They’d perform on city streets for money.

Romeo Santos, despite being very famous, has managed to keep information about his personal life extremely personal. He has been in the public eye for a long time, and yet people don’t know whether or not he’s married.

He took a photo with an unknown woman wearing an engagement ring at some point, but her name wasn’t released, and we don’t know whether the marriage took place. He has either one or two children, but that is not clear. At least one of his kids is a baby daughter named Solano, according to a tweet he made in 2021.

Ryan Garcia Net Worth – How Much Is He Worth?

Romeo Santos has an official verified Facebook account. His handle on this platform is @RomeoSantosOfficial, and he has thirty seven million followers. The people who run this account for him mainly post photo shoots of him, clips from his many music videos, links to articles and interviews of him, and so on.

Romeo Santos has an official verified Twitter account. His handle on this platform is @RomeoSantosPage, implying that “official” may have already been taken, as his name surely was. On this platform he has nearly five million followers and is himself following only 35 accounts in return.

Like his Facebook, Romeo Santos has a fairly sparse account that seems more likely run by his management than himself. It is mostly composed of video clips of his songs, music videos, and concert appearances, sentimental memories of his times performing with Aventura, and so on and s forth.

Romeo Santos has an official verified Instagram account. On this platform, he was actually able to get his name, his handle being @romeosantos. It’s a sign of his immense fame that, even though he only currently has 8 posts on his account, he has nearly 19 million followers, a number far closer to his Facebook than his Twitter.

He is following no accounts himself, yet another indication of how famous he is. Given there are, as of now, only 8 posts, it’s difficult to typify what sort of account it is, but should he begin to post more often in the future, we might get a better idea of its nature.

Romeo Santos does not have a public LinkedIn account at the present time, which isn’t surprising, given many entertainers at his level don’t see the need to take part in this platform.

With that said, should this situation change at any point in the future, we’ll be sure to update this page to keep you informed about all of the latest Romeo Santos news and information.

Romeo Santos has an official verified public TikTok account. His name on this platform is, like Instagram, also his actual name, @romeosantos. As on Instagram, he is following no accounts himself. His account currently has two million followers, however, along with nearly five million likes.

As of now, the account is mostly filled with brief clips from Romeo Santos’ various music videos and live appearances, as well as short videos of himself that seem to be taken from his home.