Phil Mickelson Net Worth – How Rich Is The American Golfer?

Who is Phil Mickelson?

Phil Mickelson, whose full name is Philip Alfred Mickelson, is a professional golfer in the United States who has the nickname Lefty for having a left handed swing despite otherwise being right handed.

In 2021, when Phil Mickelson won the PGA Championship, he broke the record for being the oldest person to ever win a major golf championship. At the time, Phil Mickelson was fifty years old, eleven months, and seven days old.

There are only seventeen players in golf’s history who won 3 of the 4 major championships, and Phil Mickelson is one of them. The only one Phil Mickelson hasn’t won is the U.S. Open, although he came second 6 times, which is also a record. 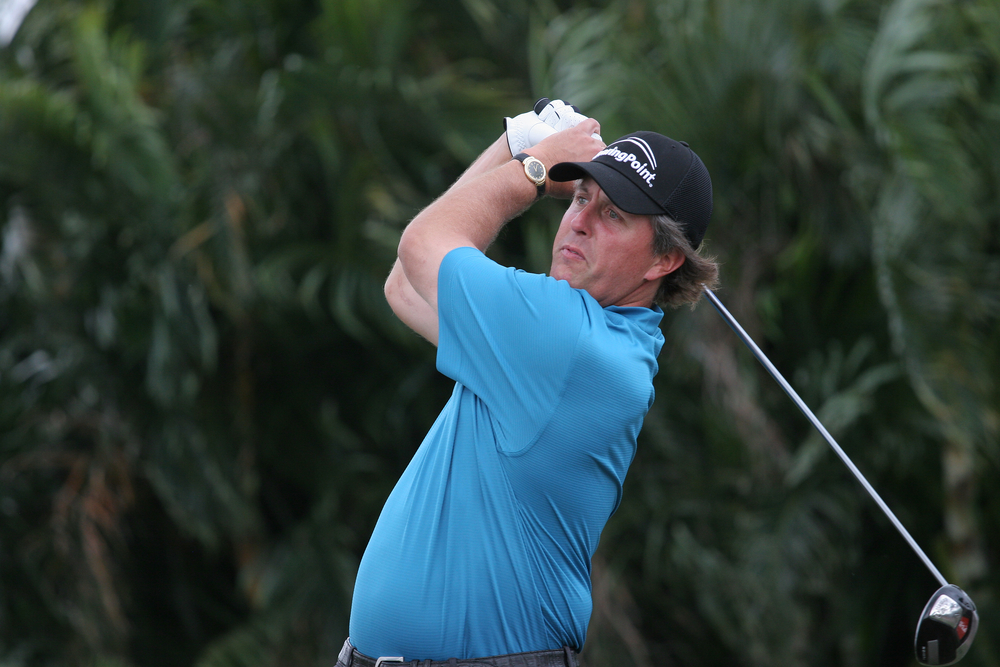 In 1992, Phil Mickelson graduated and went professional soon thereafter, bypassing the general process for qualification from the tour due to his winning in Tucson in 1991, the result of which was an exemption lasting 2 years.

Throughout this period, Jim Bones Mackay was his caddy and he won numerous tournaments. These included the World Series of Golf and the Byron Nelson Golf Classic in 1996, 1998’s AT&T Pebble Beach National Pro-Am, and, in both 2001 and 2002, the Greater Hartford Open.

It wasn’t until 2004, Phil Mickelson’s 13th PGA Tour year, that he won his 1st major championship. This win made him only the third left handed golfer to win a major championship in history. That November, he also ironically had a career low performance at the PGA Grand Slam in Hawaii.

The next year, Phil Mickelson won his second major PGA Championship. The next spring after that, he got his 3rd major title at the Masters. This shot him up to second place of the Official World Golf Ranking, the best he ever did, only behind Tiger Woods.

In 2006, Phil Mickelson won two major championships back to back but at the US Open, he made a number of critical errors on the last hole, ending up typing for second place.

In the first quarter of 2007, Phil Mickelson decided to leave his coach Rick Smith for Butch Harmon, Tiger Woods’ former coach. Phil Mickelson had been growing increasingly frustrated with the accuracy of his drive and thought Butch Harmon could help him better with improving it.

Then in 2008, Phil Mickelson was the champion for the Crowne Plaza Invitational, making an extremely impressive save after a genuinely awful tee shot nearly finished him for the game. That year, the National Italian American Sports Hall of Fame inducted Phil Mickelson into their ranks.

In May of that year, Phil Mickelson withdrew from a few games as his wife was undergoing treatment for breast cancer and he needed to be by her side. He was able to return by June. By July, however, his mother was unfortunately diagnosed with the same disease, so he took another break.

In April 2010, Phil Mickelson was the winner of the Masters Tournament, his 3rd such victory and his 4th win of a major championship. After a number of controversies for Tiger Woods, this was the year that Phil Mickelson might have become #1, but an unfortunate series of poor finishes led to Lee Westwood getting that spot.

In 2011, Phil Mickelson was the winner of the Shell Houston Open and ultimately got to third place in world rankings in a year that Tiger Woods had a dramatic fall to 7th place.

In 2021, Phil Mickelson had the goal of becoming the 1st PGA Tour Champions player to win the 1st 3 tournaments of the tour in a row. Unfortunately, however, he ended up not quite achieving that due to his performance in the Cologuard Classic, when he finished with a four under par score.

By May of that year, at the PGA Championship held in South Carolina, United States of America, located the Kiawah Island Golf Resort, Phil Mickelson managed to hold a lead of fifty four holes. Phil Mickelson was ahead of Brooks Koepka by a single shot.

Phil Mickelson ultimately won the tournament, beating Brooks Koepka as well as Louis Oosthuizen by only 2 strokes. With this win, Phil Mickelson, at an impressive fifty years old, became the oldest person to ever be a major golf champion.

As Phil Mickelson marched down the fairway after a fantastic 2nd shot, he was surrounded by thousands of devoted, enthusiastic fans. He walked the hole and along the way repeatedly tipped his hat and gave thumbs up signs to the cheering crowd. Unfortunately, this meant that a sea of people stranded Brooks Koepka from getting go the hole.

Finally, Phil Mickelson was able to get through the crowd, and he finished the tournament with a score of six under.

Then, in October of that year, Phil Mickelson won the PGA Tour Champions for the 3rd time, shooting four under par and securing the Constellation Furyk & Friends win.

In November of that year, Phil Mickelson managed to win the Charles Schwab Cup Championship, which was his 4th PGA Tour Champions win. 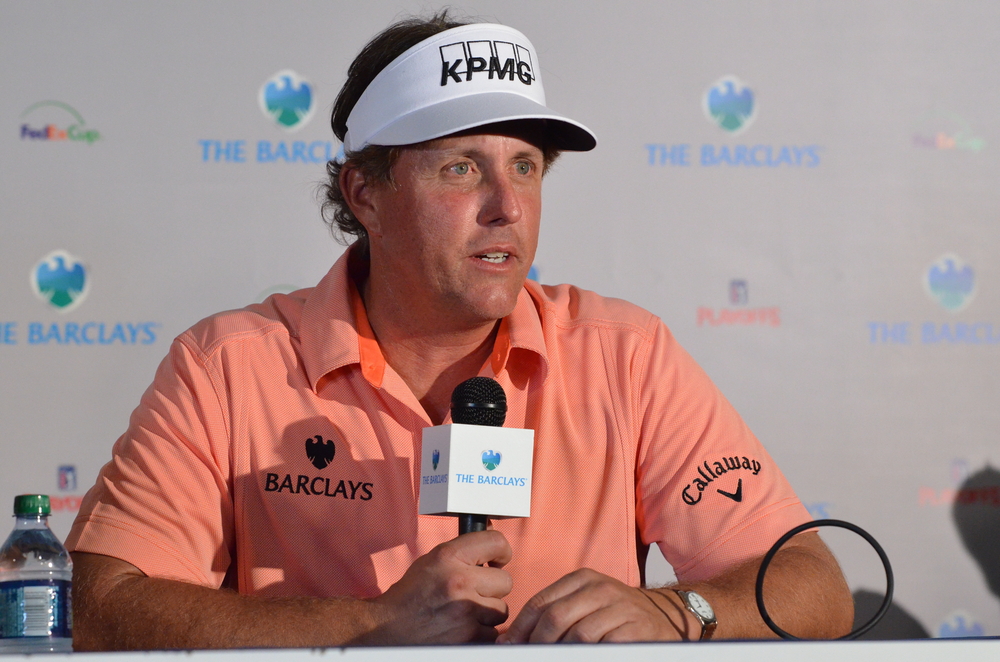 Phil Mickelson was born as Philip Alfred Mickelson in San Diego, California, United States of America, on the sixteenth day of June in the year 1970. Phil Mickelson’s parents were Mary Santos and Philip Mickelson, who worked as an airline pilot and previously was an aviator for the United States Navy.

Phil Mickelson first became interested in golf at a very young age when Alfred Santos, his mom’s dad, worked as a golf caddie for Pebble Beach Golf Links, and used to take him there to teach him the sport.

Even though Phil Mickelson is generally a right handed man, he learned to play golf by mirroring his dad’s style and so he plays left-handed. Phil Sr played golf with his son numerous times every week, and as a kid, Phil honed his skills in their backyard’s golfing area.

Phil Mickelson attended the University of San Diego High School as a teenager, graduating in 1988. Phil Mickelson then went on to Arizona State University, thanks to a golf scholarship. It wasn’t long after that the he became essentially American amateur golf’s face. He emerged victorious at not only 3 NCAA individual championships but also 3 Haskins Awards.

In 1990, Phil Mickelson led the Sun Devils team to the NCCA title. Phil Mickelson ultimately won sixteen tournaments over the course of college. Phil Mickelson was only the second ever golfer in college to get first team All American honors every single year of his college career.

That year, Phil Mickelson also broke the record by being the first golfer who swings with his left hand to win the title of United States Amateur.

Phil Mickelson mainly uses his official public verified Facebook account to post photos and video clips of himself, as well as to post information about upcoming events, tournaments, and more, as well as to connect with his fans. This, in turn, also helps Phil Mickelson net worth continue to thrive.

Phil Mickelson mainly uses his official public verified Twitter account to post his thoughts and observations, messages to his fans, information about his upcoming events and tournaments, and so on and so forth. He also uses it to connect with his fans, which in turn helps Phil Mickelson net worth as well.

On this popular social media platform, Phil Mickelson has over one million followers as of the present time. Phil Mickelson is himself following three hundred and eighty six accounts in return currently.

Phil Mickelson mainly uses his official public verified Instagram account to post photos and videos of himself and his loved ones and acquaintances, information about his upcoming events and tournaments, and so on and so forth. He also uses it to connect with his fans, which in turn adds to Phil Mickelson net worth as well.

Phil Mickelson does not have an official professional LinkedIn account as of the present time. This is perhaps not surprising as a celebrity of Phil Mickelson’s status does not always require the sort of business networking that this platform provides.

With that said, should the situation ever change and Phil Mickelson decide to sign up for an account, we will be sure to update this page with that information. After all, our goal is to help keep our readers informed of all the latest news regarding Phil Mickelson net worth, career, and life.

Phil Mickelson does not have an official public verified TikTok account as of the present time.

With that said, should the situation ever change and Phil Mickelson decide to sign up for an account, we will be sure to update this page with that information. After all, our goal is to help keep our readers informed of all the latest news regarding Phil Mickelson net worth, career, and life.