Nelly Net Worth – How Rich Is The Famous Rap Star? 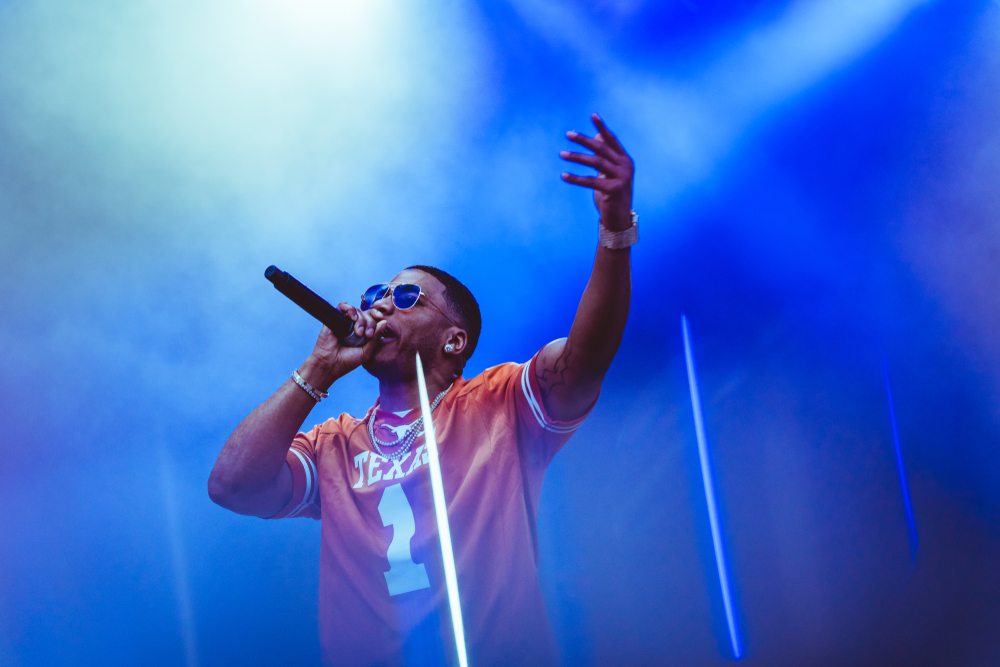 Nelly is the stage name of Cornell Iral Haynes Jr, who is a rap artist and singer, as well as being an entrepreneur. In 1993, Nelly started off as part of the Midwestern hip hop group called St Lunatics, and in 2000, he launched a solo career with his album Country Grammar, which featured “Country Grammar” and “Ride wit Me”.

Nelly’s next album, called Nellyville, featured his top hit song “Hot in Herre”, along with “Dilemma” (which featured Kelly Rowland), and “Air Force Ones” (which featured the other St Lunatics and Murphy Lee).

Other hit albums of Nelly’s were Sweat, and Suit, both of which came out the same day in 2004, and a compilation album called Sweatsuit in 2006. Sweat started off in second place on Billboard Magazine’s 200 chart in the United States, and Suit started off in first.

Nelly’s many awards include 9 Billboard Music Awards and 3 Grammys. He is the 4th bestselling rap star in American history. He also appeared in The Longest Yard, a film with Chris Rock and Adam Sandler, and runs two separate clothing lines, Apple Bottoms and Vokal.

In 1999, Universal Music Group signed Nelly onto a contract. According to Kevin Law who signed him up, many people at Universal didn’t like him at first, giving him extremely negative feedback for his music. At the time, hip hop music was known as being split between West Coast, East Coast, and South, and Midwestern was not the norm.

Eventually, the label decided to try to use this unusual background as an advantage, branding him as a Midwestern star, hoping to drum up local pride from St Louis and other areas around it.

And despite the label having initially disliked his music, his first single, “Country Grammar” ended up being a huge success, which silenced their doubts and led them to give him the green light to do a , complete album, which had the same name and dropped in 2000.

Off the success of the initial song, Country Grammar kicked off in the third position on Billboard Magazine’s 200 chart in the Unite States. Other singles were “Ride with Me”, “Batter Up”, and “E.I.”. It was certified platinum 9 times, and that year, Nelly was a Super Bowl halftime show special guest star.

Nellyville, his second album, dropped in 2000 and debuted in first place on Billboard Magazine’s Top 200 Music Albums chart, its first single “Hot in Herre” ending up as one of the biggest hits of Nelly’s career and still one of his most recognizable contributions to mainstream popular culture.

Other singles off Nellyville were “Work It”, “Dilemma, “#1”, “Pimp Juice”, and “Air Force Ones”. It ended up being certified multi platinum 6 times. Meanwhile, “Hot in Herre” won the 2003 Best Male Rap Solo Grammy/

Later that year, Nelly dropped Da Derrty Versions: The Reinvention, including “Iz U”. He also did the song “Shake Ya Tailfeather” on the Bad Boys II soundtrack. That one won the 2004 Best Rap Performance by a Duo or Group Grammy. Then in 2004, he again performed in the halftime show at the Super Bowl.

On the 14th of September that year, Nelly dropped 2 albums on the same day. They were called Sweat and Suit. Suit focused on R&B and started off as a Billboard #1. Sweat focused on rap and starred off in second place.

Suit featured a surprisingly slow ballad with country singer Tim McGraw called “Over and Over” which was a bit hit. The two did the song live on Tim McGraw’s NBC concert special in 2004, Here and Now.

In 2005, Nelly dropped Sweatsuit, which compiled songs from both albums plus three new ones. One of them, “Grillz” became a #1 itself.

In 2008, Nelly dropped the album Brass Knuckles. The first single was “Party People” with Fergie, the next was “Stepped on My J’z”, and then “Body On Me”.

In 2010, Nelly dropped his next album, which was called 5.0 and had appearances by Diddy Dirty Money, Avery Storm, DJ Khaled, Birdman, Kelly Rowland, T.I., Plies, Akon, Chris Brown, and T-Pain. Singles included “Just a Dream”, “Tippin’ in da Club”, “Move That Body”, and “Gone”, which was a sequel to his earlier song “Dilemma”.

In 2012, Nelly appeared on The CW network’s reality show The Next: Fame Is At Your Doorstep as a coach, alongside Joe Jonas, John Rich, and the legendary Gloria Estefan. He also dropped another mixtape called Scorpio Season.

In 2013, Nelly dropped his 7th album, M.O., including songs such as “Hey Porsche” and “Get Like Me”, which featured Pharrell and Nicki Minaj.

Nelly had his own reality show called Nellyville, which aired for two seasons on Black Entertainment Television, from 2014 through 2015. It covered his music career, acting career, and private life raising his kids.

In 2020, he dropped a single called “Lil Bit” and appeared with Brett Kissel and Kane Brown on their remixes of “She Drives Me Crazy” and “Cool Again”, respectively.

Nelly has also done some acting work, as previously mentioned. In 2001, he played a rapper called Prolifik in the film Snipes. In 2005, he appeared in a remake of the film The Longest Yard with Chris Rock and Adam Sandler. His songs “Fly Away” and “Errtime” were used in the film and appeared on its soundtrack.

Nelly’s rapping is often described as pop hooks with tongue twister lyrics matched with a Midwestern twang from Missouri, which explains why he blends so well when he works with country stars. His rapping style has been described as country mixed with urban.

Nelly has said that he writes rap lyrics by at first freestyling and then writing them down and working on them to improve them and make them together.

In 2003, Nelly released a sneaker in conjunction with Nike called Air Derrty, and then did similar with Reebok later. Nelly has done Ford ads, as well as contributed to the Got Milk? national campaign. He also released an energy drink based on his song “Pimp Juice” with the same name.

Nelly also owns Vokal, a men’s clothing line, in addition to Apple Bottoms, which are for women. Nelly competed at the World Series of Poker in 2007. He also temporarily hosted on the St Louis radio station WHHL HOT 104.1, covering for the regular host who was on maternity leave at the time.

Nelly put out an exercise DVD video called Celebrity Sweat in 2010. In 2011, Nelly and Vatterott College founded Ex’treme Institute By Nelly, a school that teaches music production to its fledgling students.

In 2015, Nelly did an ad campaign for Mike and Ike Candy.

Nelly was born in Austin, Texas, United States of America on the second of November in the year 1974, under the name Cornell Iral Haynes Jr. Nelly is a nickname for Cornell. His mom was named Rhonda Mack and his dad Cornell Haynes.

Cornell Haynes Sr worked as an Air Force pilot and was rarely home. Rhonda and Cornell divorced when Nelly was 7 years old. His mom moved him with her to University City from St Louis, where thy had been living. This was instead a suburb outside the city.

In high school, Nelly formed a hip hop band called St Lunatics (a pun on St Louis) with his friends Slo’Down, Kyjuan, Murphy Lee, Ali, and City Spud, his half brother. They became locally successful in 1997 thanks to their song “Gimme What Ya Got”, but failed to find major popularity outside of their immediate environs.

The Tennessee Highway Patrol pulled over Nelly’s tour bus in April 2015 and discovered marijuana and other assorted drug paraphernalia and potential drugs on board, as well as a number of guns. They booked him into a local jail, and he ended up being released on bail shortly afterwards.

It was initially believed that the potential other drug was methamphetamine, but when it turned out that that wasn’t what the substance was, they dropped the felony charge, and he was left pleading guilty to misdemeanor possessing marijuana and drug paraphernalia. The judge gave him a year of probation.

He entered a program that, in 11 months, allowed him to clear the arrest from his record. In 2017, a woman accused Nelly of raping her on her tour bus, leading to his arrest. He denied the charges, and later, they were dropped. A year later, he was again accused of sexual assault.

Nelly has accounts on most of the major social media platforms, which helps connect Nelly to his fans, which has a positive effect on Nelly net worth.

Nelly mainly uses his official public verified Facebook to plug his music and other upcoming projects, along with his various live concert appearances and more, all of which helps contribute to Nelly net worth.

On this popular social media platform, Nelly has over three and a half million followers as of the present time. Meanwhile, Nelly is currently following nearly fourteen hundred people in return.

Nelly mainly uses his official public verified Twitter account to share his thoughts and observations, plug his music and other upcoming projects, along with his various live concert appearances and more, all of which helps Nelly net worth continue to thrive.

Nelly mainly uses his official public verified Instagram account to post photos and videos of himself, plug his music and other upcoming projects, along with his various live concert appearances and more, all of which helps Nelly net worth as well.

Nelly does not have an official LinkedIn account. Should this situation ever change and Nelly choose to sign up for one, we will be sure to update this page with that information. Our goal is to keep our readers informed of all of the latest news on Nelly net worth, career, and life.

Nelly, however, hasn’t posted a single video as of the present time. Should he begin to use this account, we will be sure to update the page with that information to keep our readers informed of all of the latest news about Nelly net worth, life, and career.