Mckenna Grace net worth is about $2 million. Mckenna is a young American singer and actress starring in many prominent roles and has even been nominated as one of the top 30 stars under 18.

Who is Mckenna Grace

Mckenna Grace began her acting career when she was only six years old, starting with her first role as Jasmine Bernstein on the Disney XD ‘Crash & Bernstein’ show and the soap opera ‘The Young and the Restless’ as Faith Newman. She is also well-known for her roles of Mary Adler in ‘Gifted’, and Phoebe in ‘Ghostbusters: Afterlife.’

With media and publicists in the acting industry calling Mckenna one of the world’s best actresses, especially at such a young age, Mckenna Grace’s net worth is around $2 million.

Mckenna grew up idolizing Shirley Temple from a young age, saying she always wanted to be like her and took Shirley Temple as inspiration to start her career.

Like Shirley Temple, Mckenna started her career young when she joined the Crash & Bernstein show in 2012 as Jasmine, the youngest daughter. She would act on this show for the next two years.

Beginning a blossoming acting career at such a young age as the only professional actress in her family, Mckenna mentioned her mother’s advice that as long as Mckenna knew she did all she could have done, she could do anything she put her mind to.

Mckenna was born June 25, 2006, in Grapevine, Texas, the daughter of Ross Burge, an Orthopedic surgeon, and Crystal Grace. When she turned five years old, Mckenna began showing an acute interest in acting, drawing major inspiration from other child actresses such as Shirley Temple after she was given an extensive film collection of Shirley Temple movies.

Shortly after expressing a desire to start acting, Mckenna was allowed to take acting classes. At the acting classes, her teachers became astounded with Mckenna’s raw talent, and shortly after Mckenna earned an agent who started Mckenna out with commercial gigs to start building up her brand and career. Then, in 2013, she gained her first role in a full-length film called Goodbye World.

The family decided to move to California to help further the child actress’ career, where Mckenna’s career took off.

After ‘Goodbye World’ in 2013, Mckenna moved on to her next TV set, starring Faith Newman in the soap opera ‘The Young and the Restless’ in 2013 and 2015. During these years, Mckenna would also take on roles in other populator titles such as ’CSI’, ‘Once Upon a Time’, and ‘The Vampire Diaries’.

Her career continued to blossom as in 2016, and she had the opportunity to join the cast in popular films such as ‘The Angry Birds Movie’ and the movie ‘Independence Day: Resurgence’. On top of this, Mckenna also gained a recurring role in the ‘Full House’ reboot titled ‘Fuller House’.

In 2017, Mckenna starred in the horror movie Amityville: The Awakening’, and the movie ‘Gifted’, along co-star Chris Evans.

She mentioned how many times she’d fall but had to get back up and keep trying. Also, in 2018, the blockbuster ‘Ready Player One’ presented Mckenna with another role and the opportunity to work under the legendary Steven Spielberg.

In 2019, Mckenna’s next blockbuster movie was ‘Captain Marvel’, with Brie Larson starring in the leading role. This film broke records with its sales of over $1 billion worldwide. Mckenna also starred in ‘Annabelle Comes Home’, and the horror film showcased Patrick Wilson and Vera Farmiga.

In 2021, Mckenna continued to impress the world with her talents, voicing the role of Abigail Stone in the film Spirit Untamed. Mckenna kept her talents diversified, appearing in the drama show ‘Designated Survivors’ as Keifer Sutherland’s daughter, Penny Singleton. Mckenna has also expressed the desire to sing and become a musician, mentioning that being in a musical would be enjoyable.

What Are Mckenna’s Awards and Achievements?

In 2017, for her role in ‘I, Tonya’, Grace earned the winning place of the Hollywood Film Awards and was also nominated for Critics’ Choice Movie Awards. Her other nominations include the Women Film Critics Circle and the Film and Television Association Awards.

Growing up in Grapevine, Texas, Mckenna developed her love of acting early on with her fifth year’s birthday present, where her grandfather gave her a collection of Shirley Temple films. These movies convinced Mckenna that acting was what she wanted to do with her career, and at a family meeting, they decided that Mckenna would enroll in acting classes.

At acting classes, Mckenna was noted by her teachers as simply doing acting things that they couldn’t teach. Mckenna was signed up with an agent who, about a week later, found Mckenna’s first gig, being in a commercial for YMCA.

Listening to the agent’s advice, Mckenna went with her family to Los Angeles to be a part of the film Goodbye World, which Denis Hennelly directed. After her role was approved, she filmed her role and the movie was released in 2013, receiving lukewarm reviews but still providing a critical first step for the young Mckenna.

With good fortune, Mckenna and her father both leaned towards moving to California as her father had gained a position in the Orthopedic Surgery Residency Program of California, and Mckenna’s career would only grow immensely in the capital of the movie industry, California. This would make attending castings easier and put Mckenna closer to the world of cinema.

Although dedicating most of her life to film, TV, and movie acting, Mckenna has other strong interests and likes, such as walking in the rain, watching movies, making arts and crafts, and singing. Her love of reading also has her visiting bookstores frequently. She also enjoys singing with her uncle, a pianist, and singer.

How Does Mckenna Feel about Animals?

Mckenna has a massive love for animals and is a vegetarian due to her care and concern for animals. Her passion and love have been funneled into several PETA projects and projects with the Farm Sanctuary, where she has starred in many campaigns asking viewers to stop leaving their dogs in hot, closed cars.

All of the attention, fame, and contact with famous people and other Hollywood stars has not changed Mckenna. She remains steadfast with a heart of gold, often found doing charity work with organizations such as A Wish for Wings and Cook Children’s Hospital.

Who are Mckenna’s Favorite Actors and Actresses?

Which Filmmaker Has Mckenna Prominently Worked With? 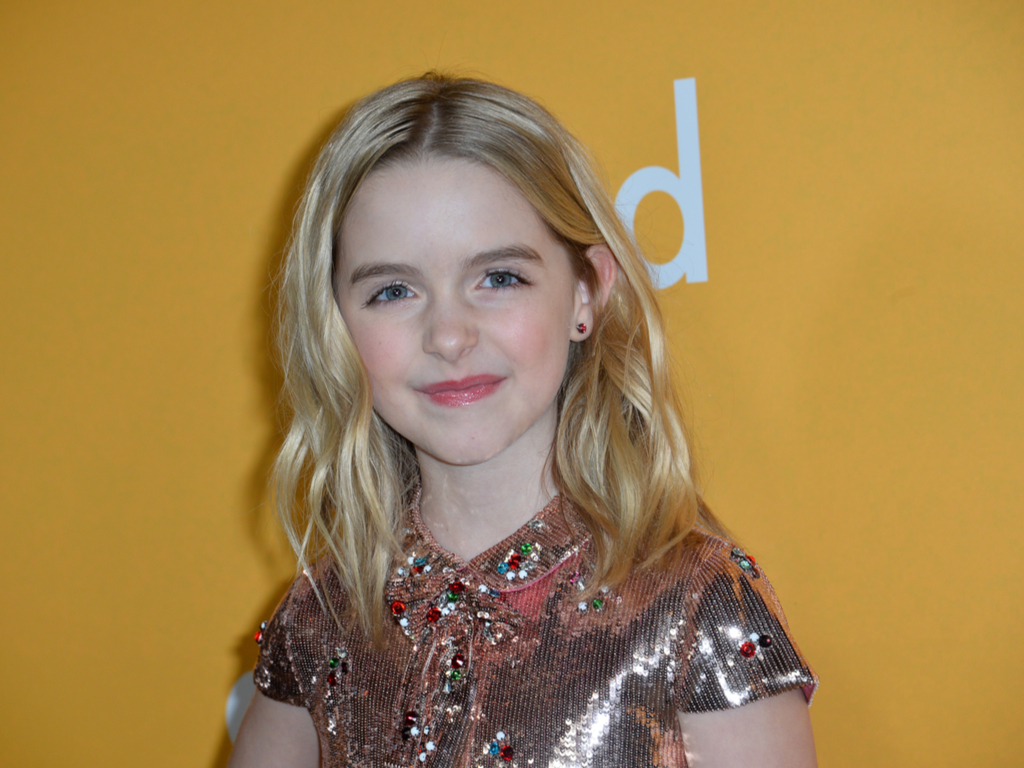 Besides Steven Spielberg, Mckenna also had the opportunity to work with James Wan in the horror movie ‘Malignant’. In addition, she had a chance to work with this director previously in 2019 with the blockbuster ‘Annabelle Comes Home’.

This new movie, from New Line, was directed by James Wan, with the screenplay written by Akela Cooper and JT Petty. During production, all plot details were tightly under wraps. And Mckenna, who was 13 at the time, was able to join other superstars such as Annabelle Wallis, Maddie Hasson, George Young, Jake Abel, Nichole Briana White, Ingrid Bisu, and Jacqueline McKenzie.

What Prominent Movies and TV Series Has Mckenna had a Role in?

Besides many others, the most prominent movies, films, and TV series that Mckenna has had a role in are:

How Did Mckenna Feel While Filming for ‘Ghostbusters: Afterlife’?

Being a long-time fan of the Ghostbusters series, playing a prominent role for something she has had a passion for meant the world to Mckenna. Her role in this movie was Phoebe, who acts and appears similar to the child version of her passed grandfather, Ghostbuster Egon Spengler.

Having seen the first film when she was three years old, Mckenna took on her role with the utmost care, taking the stance of the quiet, confident commander. This encircled her role and the rest of the crew and entire film, which the director, Jason Reitman, took into account, changing the movie from its original adult urban comedy into an Amblin-style Midwestern kid adventure.

Phoebe was using a proton pack in one particular sequence, strapped to a seat on the Ghostbuster car, Ecto-1, as Trevor (Finn Wolfhard), her brother, drove fast through a small town, pursuing a meddling ghost.

Mckenna explained how difficult it was for her to stay focused, stoic and calm as she was so incredibly excited to be on a Ghostbusters set. When the cameras started to roll, she mentioned how she would have to put herself in a completely different mindset, and the moment the cameras stopped, she would break into giggles and excitement.

Mckenna’s mother, Crystal, showed reporters a film clip where Mckenna played the stoic and calm Phoebe during the finale. Then as the director yells cut, Mckenna would burst into an excited smile, illustrating the example.

Another actress on the set, Carrie Coon, who plays Phoebe’s mother, Callie, mentioned that Mckenna is already an excellent actress. Carrie mentions the level of professionalism that Mckenna brings to the set due to her experience, coupled with that child-like wonder and curiosity that Mckenna has, makes her an absolute delight to work with onset.

When Mckenna was first getting into the filming process for the Ghostbusters movie, it was still only titled the ‘Untitled Jason Reitman project’, with a vague synopsis of a single mom moving with her son and daughter to her father’s old farmhouse to discover their past.

Jenni Rivera Net Worth – Just How Rick Was She?

How Did Mckenna and Her Family Feel About Mckenna First Starting her Acting Career?

Mckenna mentioned to reports that it was almost effortless for her to get parts, as all she had to do was write her name down and then be given the role. The first time the family decided to pursue Mckenna’s acting career on the advice of their agent, they flew to Los Angeles without expectations, planning a trip to Disneyland and Universal Studios as well as auditioning.

What ended up happening was that Mckenna got the parts she signed up for in ‘Goodbye World’ and ‘Crash & Bernstein’. This put the family in a dilemma as they could not afford to fly across the country all the time and did not want to split up the family. Mckenna’s father, Ross, recently had his eye on a residency position in orthopedic surgery in Dallas.

But, to best support each other, the family decided to have Mckenna’s father apply for residency in Ventura, California instead. He got the position with a mix of luck and good timing, allowing the family to move to California to pursue Mckenna’s acting career. Mckenna joked that she had had blonde hair ever since moving to L.A.

Due to work always being steady for Mckenna, her mother Crustal decided to put her job selling medical tools aside and help with her daughter all the time. Mckenna has also never attended an actual public school, always having tutors on hand to homeschool her.

Mckenna mentioned that she enjoys the lifestyle and that it’s fun to walk into a new hotel room and be accompanied by her mother wherever she goes. It’s an adventure where they get to do everything together like best friends, and her mother, Crystal, agreed wholeheartedly.

Are Mckenna’s Parents Worried That Being Such a Young Actress Will Corrupt Mckenna?

Crystal, Mckenna’s mother, has known of the corrosive forces of being exposed to Hollywood stardom and the filming industry at such a young age, as it has damaged many child stars before.

She said that as long as Mckenna, her daughter, is having fun, Crystal is happy. She has made Mckenna aware that if there were ever something Mckenna didn’t want to do, she wouldn’t have to. And whatever Mckenna wanted to do, Crystal wanted to empower her.

The family is excited to see where Mckenna’s acting career takes her next, as more and more roles and acting opportunities open up for the growing actress.