He also is in an extremely unusual situation of not being signed with a major record company. That means the majority of the money his music makes goes right to him. He gives Warner Bros a small amount of money for promotion, but other than that, the money is his, which likely explains his vast wealth. 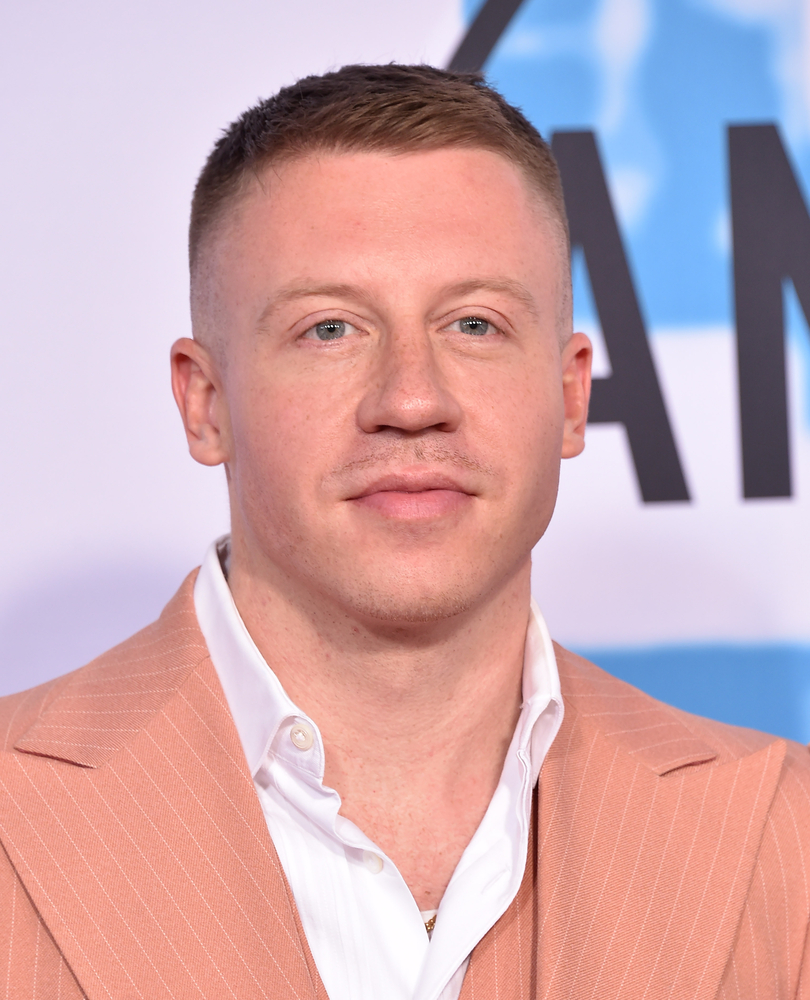 Macklemore owns a 3,765 square foot (about 350 square meters) house in North Capitol Hill in Seattle, Washington. It cost him $2.1 million.

His assets also include a self-proclaimed bizarre art collection that includes what he described in Rolling Stone in 2016 as “a kitschy velvet painting of a bald eagle, and oil painting of Drake dancing, and a transfixing rendition of a naked Justin Bieber with maple syrup pouring down his chest onto a pancake…”

Macklemore is an American rap artist whose actual name is Benjamin Hammond Haggerty. He used to go by the stage name Professor Macklemore.

He often collaborates with a partner, Ryan Lewis, and together they’ve released a number of successful albums and EPs. He and Lewis have together won numerous Grammys and other music industry accolades. 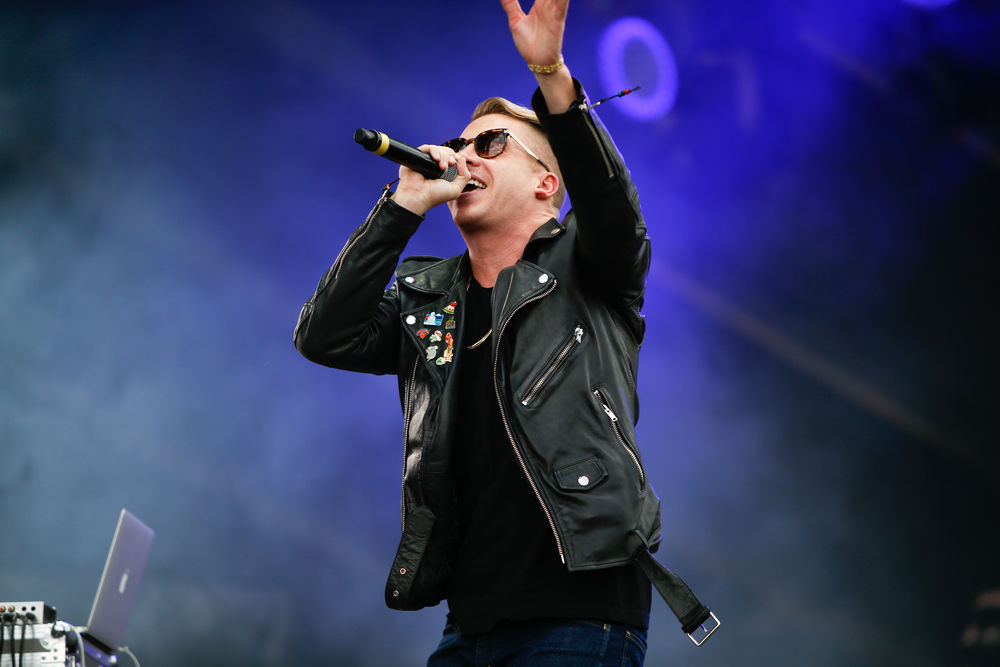 Macklemore, like benny blanco, is a young titan of the music industry. At the start of Macklemore’s professional rap career, he went by the moniker of Professor Macklemore. He released a mixtape under this name in 2000, which he called Open Your Eyes, and put out himself, without the backing of a major label.

Over time, he eventually let go of the “Professor” and started going by just Macklemore before the release of The Language of My World, his first full album, which came out on New Year’s Day in 2005. The first single was called “Love Song” and was a duet between him and a singer named Evan Roman. The album’s producer was Budo, who would be with him many times in the future.

As his music career continued to grow, he played Bumbershoot, the huge music festival in Seattle, Washington, that year, and would return twice more over the years as a performer.

He released his next album, The Unplanned Mixtape, in 2009. It would prove to be a modest success, climbing to the top 10 on iTunes’ Hip Hop charts not long after that. The two singles off that album were “And We Danced” and “The Town”. Macklemore also appeared on a song by a group called The Physics that same year.

In 2006, Macklemore had become close with rapper Ryan Lewis, and they remained best friends until they finally decided to form a group together in 2009. Calling themselves Macklemore & Ryan Lewis, they put out their first EP, which they named The VS. EP, which featured six songs. Early on in the next year, they released a single called “Stay At Home Dad” which had been cut from the album.

The end of 2010 saw the release of yet another EP, this one entitled VS. Redux. It featured a number of very successful songs. “Otherside,” for example, was a deeply personal song for Macklemore that went into the various problems he had over the years with abusing drugs and alcohol.

The song is built off of a sample of a famous Red Hot Chili Peppers track that had the same name.

One of the group’s early big successes was performing “Otherside” at the Mariners Opening Day in 2011 before an enormous audience of around 48,000 people. From that point on, they set off on a tour of their music and played a number of big festivals, including SoundSet, Rock the Bells, Bonnaroo, and perhaps most impressively, Lollapalooza.

By the latter part of the next year, they had finally released their first full-length album. It was called The Heist and was an immediate success, largely in part due to the popularity they had built with their EPs and live appearances.

The week it came out, it hit second place on the Billboard 200 in the United States, thanks to moving over 78,000 units.

The first two singles were “Wings” and “Can’t Hold Us”. Arguably the most famous song from the album, however, is the third single, “Same Love,” a track that promotes the cause of gay rights and was inspired by Macklemore’s much-loved uncle, John, and Sean, his beloved husband.

It was recorded to help support the campaign for a referendum in Washington State to make same-sex marriage finally legal. It was a huge success, both as a campaign and a song, making the 11th spot on Billboard’s Hot 100 in the US and first place in New Zealand and Australia.

Four years later, in 2016, Macklemore & Ryan Lewis finally released their second album together, called This Unruly Mess I’ve Made. They’d released a few of the singles the year before, including one called “Downtown” and a song with Ed Sheeran called “Growing Up (Sloane’s Song)”. They also promoted the new album with a tour called An Evening with Macklemore and Ryan Lewis.

Although the album did well, debuting in the 4th spot on Billboard, the two friends decided to take a break from their group afterward. Macklemore released a few singles on his own, including “Drug Dealer,” another look at his drug abuse in the past.

He also discussed drug abuse in an interview with President Obama. Clips from this talk were used in a documentary along with the song.

The following year, Macklemore announced the release of Gemini, his second solo album (his fourth overall, counting his collaborations with Ryan Lewis). The first single was called “Glorious” and was a duet with Skylar Grey. The two singles to follow her “Good Old Days” and “Marmalade”.

Gemini garnered Macklemore some of the best reviews of his career and hit number 2 in the US Billboard 200, as well as first place in their Independent Albums chart.

Macklemore then took another strong political stance by performing “Same Love” in Sydney, Australia at a major rugby game, in order to voice his support for the passing of gay marriage rights in Australia. 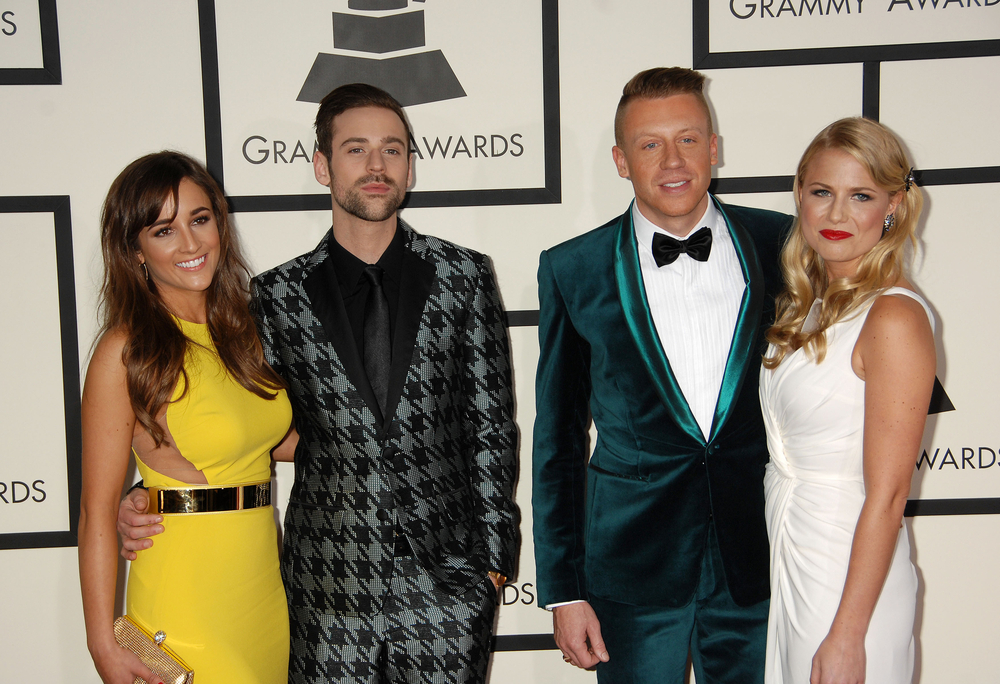 Macklemore was born Benjamin Hammond Haggerty on 19 June 1983, in Seattle, Washington. He grew up in Seattle and became obsessed with hip hop music at a young age. When he was 6 years old, he discovered a hip hop group called Digital Underground which began his interest in the genre.

From the age of 6 to 14, his love of hip hop continued to blossom, and he started writing songs at 15. He also began singing, and drew on the influence of groups and artists such as Wu-Tang Clan, Freestyle Fellowship, and Nas.

As a teenager, he went first to Garfield High School and then Nathan Hale High School. While there, he joined a volunteer program that was entitled “Gateways for Incarcerated Youth”, whose purpose was to help young people with criminal records find a pathway out. He ran workshops for them involving music, hoping to inspire change in these troubled youths.

It was at this young age that he first assumed his early “Professor Macklemore” persona, albeit here it was for a class project in an art class, and the “Professor Macklemore” in question was a superhero. The precious Haggerty even formed a hip-hop music group with some of his friends, which they called the Elevated Elements.

They even made an album, Progress, which can be seen as setting for the groundwork for all of the independently released albums he’d go on to make in his career as an extremely successful professional music artist.

After finishing high school, Macklemore attended the College of Santa Fe. Although he only remained there for a single year, he clearly got some very good things out of the experience. In an interview after becoming famous, he clarified that it was “a very pivotal time in a lot of ways. Santa Fe was the place where I got good at rapping.”

He had applied to join the music program, however, but failed to make the cut, which is the reason he returned to Seattle, ultimately finishing his degree at the Evergreen State College in 2009.

Macklemore’s mom is named Julie Schott and his dad is Bill Haggerty. He has one brother, whose name is Tim.

Macklemore has a wife, Tricia Davis, who he got engaged to in 2013 after they’d already been together for nearly a decade. In May 2015, their first daughter was born, Sloane Ava Simone Haggerty. The next month, Macklemore and Tricia finally tied the knot.

Three years later, in April 2018, Tricia gave birth to the couple’s second child, another daughter. Her name is Colette Koala Haggerty. In 2021, they had yet another child, their first son, who they named Hugo.

Macklemore had problems with drug and alcohol addiction in the past. He checked himself into a rehabilitation facility in 2008, and stayed on the straight and narrow for three years until he suffered a small relapse. He would later write a song about it called “Starting Over”. Since then, he has been sober.

In 2016, he also appeared with President Barack Obama to address the issue of opioid addiction. He said, “When you’re going through it, it’s hard to imagine anything being worse than addiction.

But the shame and stigma associated with the disease keeps too many people from seeking the help they actually need. Addiction isn’t a personal choice or a personal failure.”

Macklemore is a fierce supporter of the rights of LGBTQ+ people and is very close to his gay uncle and his husband.

Macklemore has a huge reach on social media, thanks to his enormous fame in music.

Macklemore has a public Facebook account that currently has 5.8 million followers. On it, he posts career and personal updates, photos, plugs for various products and events he’s involved in, and more.

Macklemore has an active Twitter account that currently has 2.2 million followers. In turn, he is following 1,376 people currently. The account can be found at @macklemore. On it, he posts much of the same posts that are on his Facebook, such as updates, photos, plugs, and more.

Macklemore does not seem to have a public LinkedIn profile at the present time. Should he have one in the future, we will be sure to update that information.

Like most big name celebrities today, Macklemore also has a TikTok account, which is also @macklemore, as with his Twitter and Instagram. On it, he posts funny videos of himself and his children. He currently has over 250,000 follower and 1.8 million likes.

Macklemore is 5 feet, 8 inches tall, or 179 centimeters. Macklemore’s weight is estimated to be 163.1 pounds, which is 74 in kilos. His hair colour is blond, while his eye color is blue.