Luisito Comunica Net Worth | How Much Is He Worth Now?

Luisito is a successful YouTuber who has amassed a large following and is one of the most subscribed YouTubers in Mexico. Luisito Comunica net worth is estimated to be around $13 million.

Who is Luisito Comunica?

Luisito (Luis Arturo Villar Sudek) is the second-most subscribed to Youtuber in Mexico, only being beaten by the Youtuber Badabun. His subscriber count is growing at 38 million viewers, and his most viewed video has 65 million views. Luisito’s channel is the seventh most subscribed channel for people who mainly speak Spanish.

Want to read more about YouTubers and Entertainers? Check out Tanner Fox and Chris Hansen here.

Although data sources are unsure of the exact amount of Luisito’s earnings, Luisito Comunica’s net worth is estimated to be around $13 million, based on Youtube’s advertising. However, Luisito has multiple income streams, so Luisito Comunica net worth may be closer to $18 million.

Luisito (Luis Arturo Villar Sudek) was born on March 20th, 1991 in Puebla de Zaragoza. Although not much is known about Luisito’s early life, he did attend the Instituto Oriente de Puebla. Later, he also attended the Benemérita Universidad Autónoma de Puebla for communication sciences but eventually left his academics to pursue an English teaching career, specializing in schools that admitted students who were expelled from other schools.

In 2007, Luisito began experimenting with Youtube, creating a channel called “Piano Para Gente Cool”, which he later renamed “LouieArtie”. This channel was geared towards making piano tutorials and piano covers. However, the channel did not gain the success he was looking for, and the project was closed.

In October of 2011, Luisito created another channel, naming this one “OciodeLuisito”, where it became his vlog. The channel gained some attention, with the most-watched video being “Uncomfortable Dog (at the wheel)”, however, the channel is no longer in use.

Luisito, being born in Puebla de Zaragoza, tried many channel attempts during his Youtube career. In 2012, Luisito created the channel everyone now knows and loves, “Luisito Comunica”. He gained success here and was noticed by NoMeRevientes and a gentleman by the name of Yayo Gutiérrez, in particular, who helped him push Luisito’s success. 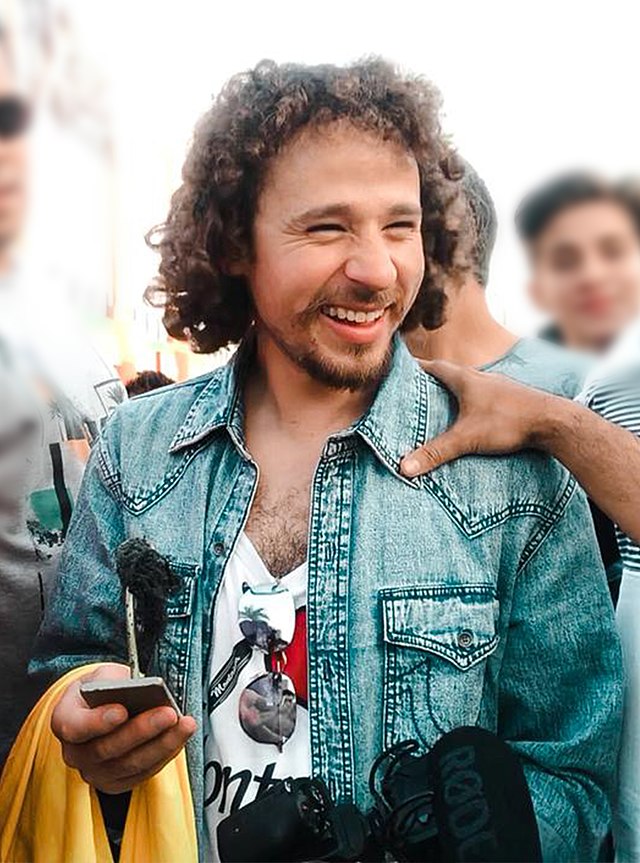 After Luisito joined the team at “NoMeRevientes”, managed by Yayo Gutiérrez, he also created his own channel “Luisito Comunica”, geared towards travel and traveling videos, which he found to be far more successful than his previous Youtube channels.

Adding on to his successes, Luisito moved from Puebla to Mexico City, where he would find more opportunities to grow his channel and career.

Google approached Luisito in 2017, asking him to map Papalote Museo del Niño. And in 2018, Luisito created the channel “Luisito Around the World”, a Youtube channel made for English-speaking viewers.

In 2018, along with a new channel, Luisito also created a clothing line named “Rey Palomo”, which is a name he uses as a pseudonym.

In 2019, Luisito made an appearance in Dedicada a mi ex, a film. He also appeared in the Spanish-dubbed version of Sonic the Hedgehog, taking on the iconic voice role of the lead character, Sonic.

Later that year, a petition was created on Change.org, where fans of the show requested that the voice actor named Yamil Atala play the role of Sonic instead. Although the petition acquired over 20,000 signatures, it did not affect the cast line-up, as Luisito still was the voice of Sonic.

In October of 2019, Luisito came out with his first-ever book called ‘Lugares Asombrosos: Travesías insólitas y otras maneras extrañas de conocer el mundo.’ The book currently has 4.7 stars on Amazon, and is well liked by the public and those who have read it.

In 2020, Luisito created a podcast named ‘En Cortinas con Luisito’, which was available on Spotify, Youtube, and Instagram. Later that year, he was invited on to be part of a Youtube Original documentary named ‘Aislado: un documental en cuarentena’ with another person named Juanpa Zurita. They spent the documentary talking about the isolation that happened during the pandemic.

Luisito also mentioned during this time that he planned on launching his own mobile phone company, and he wanted to call it ‘PilloFon’.

Later that year in December, Luisito bought the shares of Diego & Kaito, a Japanese food restaurant in Mexico City.

In 2021, Luisito came out with ‘Gran Malo’, his own brand of tequila. The ‘Gran Malo Spicy Tamarindo’ variety currently has a rating of 4.7 stars on Amazon.

Later in 2021, Fasfu, a fast-food franchise, launched in Mexico, Peru, and Columbia. The menu items cost between 120 and 210 pesos and were not well received by the community.

What are Some of the Controversies Behind Luisito’s Career?

What are the Fake Criminal Charges Directed Towards Luisito?

Luisito had an instance where a certain person was spreading false rumors about Luisito breaking the law, such as pigeon poisoning, sexual assault, and maltreatment. The accusation became so prominent that the cyber police of Mexico had to publicly deny all the accusations Luisito was facing, and educate people on what was really going on.

Luisito, during the entire ordeal, took the situation remarkably well, talking and responding to people on Twitter.

Who was Sergio Ramirez?

Sergio Ramirez was a commenter of one of Luisito’s videos, saying that in 60 years he had never traveled to the ocean, as he was always busy with his work. This comment became viral on social media, with many fans putting this in front of Luisito. When Luisito caught news of the man who watched his travel videos but had never traveled himself, Luisito wanted to do something about it.

On August 9th, 2019, Luisito published a video titled ‘Ayúdenme a encontrar a este hombre’, which means ‘help me find this man’. In the video, he asked for help in tracking down Sergio Ramirez so he could do a good deed and take the man on a trip to the ocean.

Subscribers and fans of Luisito did everything they could to find Sergio, eventually figuring out that Sergio lived in Cuernavaca, Mexico, and likely was a veterinarian as a profession. Luisito then let his fans know that sad truth – the only way to communicate with Sergio would be through his Youtube channel. Almost overnight, Sergio’s channel reached over 1 million subscribers without a single video or piece of content on it.

A few days later on August 22nd, unfortunately, Sergio’s YouTube channel was hacked by Emanuel Riveira, an Uruguayan teenager. This caused a lot of upset as fans lost their only way of communicating with Sergio.

A few days later, Sergio’s hacked channel got its first upload with a video saying that the hacker was caught. Then, on August 28th, another video was uploaded, where a man claimed to be Sergio Ramirez.

Unfortunately, the video with Sergio in it had a lot of discrepancies, such as too good of an edited video when Sergio was known for being a non-tech-savvy man. The man in the video also had an Uruguayan accent while Sergio was from Mexico. And lastly, in the video the fake Sergio promoted the Firework app. The timing of this video linked up with another video with the same app, posted by Yao Cabrera, an Uruguayan Youtuber who was behind the hacking. Later, these videos were deleted.

These actions created a lot of enmity towards Yao and Emanual from Luisito’s fan base, especially due to their desire to become famous over a good cause, and destroyed the way for fans to communicate with Sergio.

Fans also later discovered that Emanuel’s fake video where Sergio claimed to be real actually had Emanuel’s face reflected in it, revealing that Sergio was actually a paid actor and that Emanuel, Yao, and their friends were making the whole thing up. This caused a lot of backlash and anger in the fan base, especially towards Yao.

To stop the toxicity, Luisito eventually asked his fans to unsubscribe from Sergio’s channel, thus ending the conflict. Sergio’s subscriber count went from over 1 million to barely 420,000 and lost as much as 173,000 subscribers in a single day.

Unfortunately, Sergio Ramirez remained a mystery with his real identity never behind known.

The fake Sergio from the video came out and publicly stated that his name was José Luis Scalia, and he was a paid actor hired by Yao to make the videos that were then uploaded to Sergio’s channel.

What Awards has Luisito Received?

In 2018, Luisito received the award for Digital Personality of the Year from the GQ Latin America Men of the Year. On top of that, Luisito also earned the Digital Leader of the Year Award from the Eliot Awards.

What Happened During the Interview When Luisito Visited the Sánchez-Pizjuán?

On February 27th, 2022, Luisito was in the stands for his first derby in a full-house stadium called the Sánchez-Pizjuán, saying it was his first derby with fans since after the pandemic. After the game, Luisito had the opportunity to sit with the club’s media team at the Ciudad Deportiva José Ramón Cisneros Palacios.

Luisito let the interviewer know that his name ‘Luisito’ was a nickname given to him by the other kids at his school. He said he learned everything at his school, such as communication, being quiet, and dancing. But the nickname never bothered him. Using it as his Youtuber name was unexpected, however, as he never expected to become a Youtuber.

Commenting on the game, Luisito went on to say that the love fans have for the derby is contagious.

Luisito also let the interviewer know how beautiful it was to be in the city of Sevilla for the derby experience, mentioning that the city had impressive architecture and that The Big Derby was magical.

He said the fans here, and their passion for sports reminded him of his father. They would go together for local baseball games, but in Luisito’s town, there wasn’t the same level of passion that the fans had.

Luisito went on to say that the derby he saw that day, apparently, was the first derby in three years that allowed for fans to be present, so it was a momentous occasion. He said he was impressed to hear all the chanting and see the colors displayed.

The popular player of the game, Luisito said, played in the derby excellently, which attracts more fans to the game and to the sport in Mexico in general.

Luisito commented on the city again, saying that he’s fallen in love with the streets of Seville, and how he wanted to buy a summer home here. Luisito confessed that, although Seville wasn’t initially on his list of destinations to visit, he definitely wants to return, ideally with his own home here as he enjoys the warm climate and walking through the streets.

He mentions that the sounds of the city in Seville are beautiful, with everything from the guitars on the street corner, to the castanets, and the little bars. He closed by saying he has loved his time in Seville and wanted to return again soon.

Luisito’s parents are Masaki Kanda and Gina Dallas, although not much is known about them currently.