Luis Ruelas Net Worth – How Much Does He Make?

Who is Luis Ruelas?

Luis Ruelas (also known as Louie A. Ruelas) is an American businessman and reality television performer. An avid golfer and fitness buff, he is most famous for being the fiancé of Real Housewife of New Jersey, Teresa Giudice. Ruelas is also known for his philanthropic work, much of which focuses on helping children with special needs. Let’s find out more about Luis Ruelas net worth and his life. 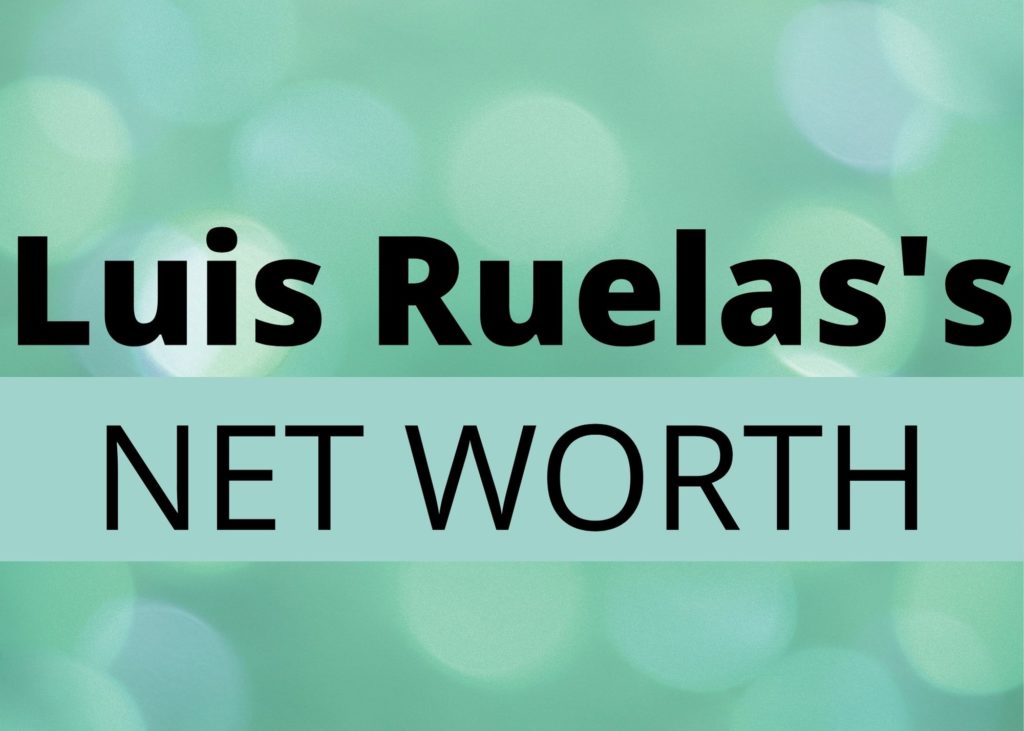 It is currently unknown which assets make up Luis Ruelas net worth, though it can be assumed he has cash reserves in one or more bank accounts, along with the value of the company he co-founded. It is unclear what, if any, property Luis Ruelas owns personally, though it is reported that he, together with his fiancé Teresa Giudice, acquired an investment property together in 2021 valued at $3.3 million.

This property, called “Clarence Manor,” is located in Montville, New Jersey, and was allegedly only three doors down from the house Luis Ruelas was sharing with his fiancé at the time of purchase. The property is purportedly modelled after the painting “Beyond Summer Gate” by Thomas Kinkade. It features seven bedrooms, seven bathrooms, and covers seven thousand square feet. The exterior of the gated mansion is grey stone. This property has definitely helped increase Luis Ruleas net worth.

It is unclear what percentage of the $3.3 Million price tag was paid for by Ruelas and Giudice and what percentage is under mortgage (and thus subtracts from the couple’s overall net worth). The couple have since removed the investment property from the market and moved into it themselves after Teresa Giudice found a buyer for the $2.2 Million-dollar-home she once shared with her now ex-husband Joe Giudice.

It is currently unknown what other assets Luis Ruelas owns in terms of investment portfolios, artwork, vehicles, and savings accounts.

Recommended reading:
Yung Gravy Net Worth – How Much Does He Make?

According to his LinkedIn profile, Luis Ruelas has over 25 years of experience in the field of digital response marketing. He has been the founder or co-founder of at least two companies and established businesses in both New York and Florida. This experience feeds directly into Luis Ruelas net worth at present.

You can read more about Luis Ruelas’s companies here.

In addition to his marketing career, Luis Ruelas has appeared on a number of reality television programs, including The Real Housewives Ultimate Girls Trip and The Real Housewives of New Jersey. He has also appeared as himself in television interviews and on shows like Watch What Happens Live with Andy Cohen. Like fellow actor and businessperson Ben Baller, Luis Ruelas has many talents.

Ruelas was born 23 April 1975 in the United States of America. The identities of his parents are not common knowledge, but he grew up in the tri-state area of New York, New Jersey, and Connecticut. He attended Tappan Zee High School, located in Orangeburg, New York, and graduated from that institution in 1992. His grades from the school are not available.

It is not clear how many brothers or sisters Luis Ruelas has. Like the lack of information on his parents, there is little actually known about his birth family as he has only recently come into the public eye.

This is true of Luis Ruelas’s early life in general. While many details have come to light for the time period around and after he began to date Teresa Giudice, much of what happened in his earlier years remains unknown.

Although he’s had a lot of former girlfriends, Luis Ruelas was married only once. Ruelas’s first wife is named Marisa DiMartino. The couple have two children together, both boys: Louie, Junior and Nicholas. Although it isn’t clear when they first got married, because Ruelas wasn’t yet in the public eye at that point, we do know that they were divorced in 2011.

Even though divorces can often be contentious, Ruelas and DiMartino’s split seems to have been amicable. Speaking to In Touch magazine, she said, “I’m really happy for Teresa and Luis. I’m happy for him. Luis is actually the father of my children, and he’s a really good person. In general, we got married, we were very young and had babies and then it fell apart…We’re very good with each other, and that’s basically it.”

Now he’s engaged to Teresa Giudice, who became famous for appearing as a regular cast member on Bravo’s hit reality series, The Real Housewives of New Jersey. Teresa was married to her previous husband, Joe Giudice, for 20 years, but over the years, they were both charged with multiple counts of fraud. She went to prison for 15 months and he was eventually deported to Italy due to various crimes and not having an American citizenship. Only a handful of months later, Teresa Giudice was dating Luis Ruelas.

When DiMartino was asked about what she thought about Ruelas’ compatibility with Teresa, she told In Touch that she was “not concerned…He takes care of me and my children, and that’s what it comes down to.”

Ruelas has also been described as having been a bit of a playboy in his past. Another woman he used to be engaged to from 2018-2020, Vanessa Reiser, even sued him, claiming that not only was he sexually demanding but also accused him of “punishing” her when she refused him sex. She told Page Six, “He would be nasty, withdraw from me, and blame me for what happened.”

Before dating her, he spent seven years with Paula Sanchez from 2011-2018, and she had similarly unkind things to say about him. “If they had sex like four times in one day,” it wasn’t enough for him, according to a Page Six source.

He’s also been accused of cheating on Giudice, although Ruelas denies these accusations. According to an interview of Teresa Giudice on Watch What Happens Live with Andy Cohen, she claimed that she wasn’t going to sign a pre-nuptial agreement. Cohen argued that she should in order to “protect what she has” and also for Luis Ruelas to “protect what he has.” The reality television star didn’t seem interested.

In response, a former star of The Real Housewives of New York City, Bethanny Frankel, who herself had gone through a long, arduous divorce, responded by tweeting “I may jump through my phone if @Teresa_Giudice doesn’t sign a prenup @Andy.”

Of his two children, his son Nicholas is autistic, and due to this, Ruelas spends a lot of his free time acting as an advocate for special needs children, with autism being a key focus of his efforts. Additionally, his charity work also extends to helping to feed underprivileged families in Harlem through volunteering with the not-for-profit org JL Blessings.

Luis Ruelas is 5 feet, 10 inches tall (178 centimetres), making him just over the average height for men. Ruelas’s weight is 89 kg (196 pounds), which is slightly above the average for American men, which is 80.7 kg. According to WikiFeet, his shoe size is 7. If this indeed accurate, this would actually make his feet significantly below the average for an American male, which is 10.5.

Ruelas has a strong interest in personal fitness, as one can see from his Instagram posts, which often feature the businessman engaged in athletic or outdoor pursuits, such as running, weightlifting, and golfing. He maintains a trim and muscular physique which he often displays on social media and for the press.

Luis Ruelas has a moderate presence on social media, mostly concentrated on Instagram and LinkedIn. It is not clear how much of his reach comes from his business efforts, his reality television presence, or his connection to The Real Housewives of New Jersey star Teresa Giudice, but it seems likely that the majority of his following is the result of the latter.

While there are a number of impersonator accounts claiming to be Luis Ruelas, the businessman and reality television star does not currently appear to have an account of his own or otherwise maintain an active presence on Twitter. He does appear frequently in photographs and videos posted to the website, often by reality news accounts.

For those looking to follow Luis Ruelas on the social media platform, however, there is one option: the hashtag #louieruelas. This hashtag is frequently used to tag Ruelas, most often in pictures with his fiancée Teresa Giudice (who does have an active Twitter account and a large following).

On Instagram, Luis Ruelas uses the account name @louiearuelas and as of 2022, has a follower count in the high 5 figures. His profile describes him as “father | motivator | philanthropist | warrior” and links to his business website for Digital Media Solutions. The vast majority of his Instagram posts feature fiancée Teresa Giudice, though a sizeable minority showcase Ruelas’s interest in personal and physical fitness.

The other major component to Luis Ruelas’s Instagram posts are his two sons and their accomplishments and life milestones. Posts include competing in the Spartan Sprint, shopping for sweats at the mall, and education milestones like graduation photos and university acceptances.

Instagram is Luis Ruelas’s most active social media account and fans who wish to follow the businessman’s life and exploits would be best served following him on this platform.

Luis Ruelas’s LinkedIn profile currently features over 500+ connection to other professionals, influencers, and businesspeople. His profile maximises his positioning in the digital response marketing industry, citing his 25+ years in the industry and outlining his reasoning as to why he has been so successful.

Ruelas cites his ability to provide outstanding results, combined with a talent for building long-lasting relationships with those he works with, as key components of his success. He also describes himself as having “a strong sense of integrity,” an “honourable work ethic,” and a “witty sense of humour.” While these qualities are commendable it is not clear to what degree he actually possesses them.

His LinkedIn profile also lists a number of influencers he is interested in, including Jennifer Lopez, Tony Robbins, Oprah Winfrey, and Arianna Huffington.

Like many of the older generation, Luis Ruelas does not appear to have yet joined TikTok, though his fiancé Teresa Giudice does have a profile on that platform.

Like on Twitter, however, there is a hashtag linked to the reality television performer: #louieruelas. As of early 2022, the majority of the posts using this hashtag are fan accounts discussing whether or not he is a good fit to marry Teresa Giudice. Many of the video using this hashtag also urge Giudice to sign a pre-nuptial agreement before marrying him.