Lil Bibby Net Worth – How Much Does He Make?

Lil Bibby net worth has been on fans’ minds for years as the rapper made inroads into the industry and left a lasting mark. His is an archetypal rags to riches story. 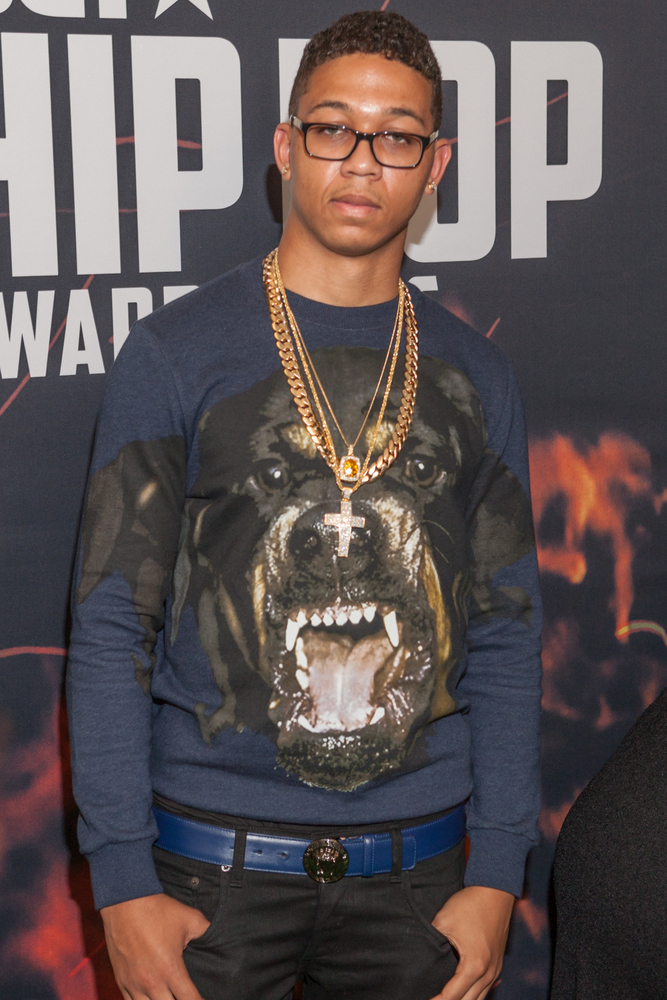 The rapper beat the odds that were stacked against him to launch his career that began back in 2011. However, he only released his first mixtape in 2013. Since then, Lil Bibby’s incredible musical talents and business savvy have drawn in a large fan base of adoring fans and, as a result, made the music mogul a fortune.

With time he has solidified his position in the rap industry. Thus, it’s no surprise that his fame and net worth continues to grow steadily. Here is everything we know about Lil Bibby net worth and its growth.

Who is Lil Bibby?

He started out as a popular rapper before seamlessly transitioning into a label executive juggling some of the biggest names in the industry.

Brandon George Dickinson Jr., also known as Lil Bibby, was born in Chicago on July 18, 1994. His parents were lower-middle-class, and he eventually ended up being raised by a single drug-addicted mother.

He spent his childhood and much of his teens on 79th Street on the East Side of Chicago. The area was notorious for being a rough and dangerous neighborhood at the time.

However, that was not his only challenge. His mother’s drug addiction resulted in her becoming increasingly violent. Eventually, his older sister took on more of a parental role in the star’s life as their mother slipped further and further into addiction.

Unfortunately, even his sister was involved in the local drug scene as a seller. Thus it comes as no surprise that Bibby grew up quite violent and regularly got into fights. His unstable home situation reflected negatively on his grades at school.

Although he had hobbies like listening to music and playing basketball, the declining living conditions around him hindered his ability to pursue these further. By the time he turned thirteen, Bibby had joined his sister in selling drugs to make ends meet.

The rapper once revealed that in his teenage years, he had been shot many times, and many of his friends also ended up in prison.

As things continued declining, Bibby focused his energy on music and revealed that he also began reading self-help books. These inspired him to get his life back on track, and at sixteen, he decided to pursue a career in music.

With a goal in mind, the future star began recording raps on his phone. He also teamed up with others who had the same interest in making music, and by 2011, he was actively working on creating a debut mixtape.

2013 saw Lil Bibby officially break out onto the hip-hop scene when he released his mixtape “Free Crack.” Bibby had drawn inspiration from rappers like Drake, Jadakiss, and rapper Kanye West whom Bibby had a special bond with as they both hailed from Chicago . In fact, the rapper revealed that Kanye’s famed single “Crack Music” inspired the name of his debut mixtape, “Free Crack.”

The star’s music told stories of early childhood. It was critically praised for its originality as it showed the rapper had not taken direct inspiration from other rappers’ stories or verses. The mixtape landed Lil Bibby on the cover of ‘Vibe’ as a rapper to watch in 2014.

His debut mixtape also featured many other upcoming rappers struggling to make their mark, including Lil Herb and King L. Hit-boy, Young Chop, and ‘The Olympicks’ produced the mixtape, and DJ Scream hosted it, resulting in it becoming a hit in Chicago nightclubs.

Bibby’s deep voice, heavy base, and bold lyrics proved to be a lethal combination that had fans flocking to support the rising star. His song “Whole Crew” earned its place as a local party anthem. Bibby even released videos for ‘How We Move,’ ‘Water,’ and ‘Tired of Talkin.’

Still flying high from the success of his debut,  Bibby revealed his next project was an EP in late 2013. It’s claimed that around this time, Bibby claimed Drake had reached out saying he was a fan of his music and advised him to add two extra tracks to ‘Free Crack,’ causing its release to be delayed.

By early 2014, Bibby landed several TV and radio show appearances. He was officially a well-known celebrity and even had the opportunity to perform live freestyle on a radio show.

Even XXL included the young rapper in their “Freshman Class of 2014,” although the spot was initially given to Young Thug, who canceled unexpectedly, leaving it open for Lil Bibby. Then in mid-2014, Bibby was featured on several singles for Juicy J.

That August, he released his second mixtape, “Free Crack 2.” This time, DJ Drama hosted his mixtape and boasted features from established rappers including Wiz Khalifa, Anthony Hamilton, Juicy J, and Kevin Gates. This tape was released as a digital download as well and was downloaded more than one hundred thousand times.

Again, critics loved the rapper’s music and even claimed that this mixtape outshone the first. The album was a symbol of the star’s growth in the industry and as a rapper and featured a more soulful feel to it. Even the lyrics were more profound in meaning. With both his mixtapes being well-received, Lil Bibby went on to record his third mixtape called ‘Free Crack 3.’

His success with his first two mixtapes secured Lil Bibby a contract with RCA Records and Dr. Luke’s Kemosabe Records. His mixtape ‘Free Crack 3’ was released in late 2015  under RCA Records. It featured guests like R Kelly, Common, Herb, and Juicy J. Much like his other work; it was a critical and commercial success. with over two hundred and seventy-two thousand downloads.

Bibby also released two singles, “Ridah” and “Aww Man” in 2015, that were reportedly meant for a new album he was working on. Rumors hinted that it was for the fourth part of his Free Crack series.

By 2016, many labels were vying for a chance to sign Bibby for collaborations. Then the young rapper shocked the industry by starting a label company called Grade A Productions with his brother George “G Money” Dickinson.

In August 2016, Bibby released his debut EP, ‘Big Buckz,’ with his production company. Later that year, he also released “Thought It Was A Drought,” produced by DJ L Beats and Roberto Mario.

By March 2017, Bibby was ready to release yet another EP and dropped “FC3: The Epilogue” with RCA Records and  Kemosabe Records. Both his EP’s were massive hits; thus, with things taking off and speeding up, it came as no surprise when Bibby revealed that he gave up smoking weed to focus on his business, saying:

“I can’t miss a beat… I like to know everything that’s going on in my business.”

Then after the release of “FC3: The Epilogue EP,” Bibby parted ways with RCA Records. However, he still remained contracted to Dr. Luke.

Bibby seemed to go silent after “FC3: The Epilogue EP” until he started using the hashtag “Free Bibby” in early 2018 on social media in protest against his label who refused to release the project he was working on. Unfortunately, it seems that Bibby’s debut studio album, “Free Crack 4,” is still being held hostage by “Kemosabe Records” as it remains unreleased, much to the disappointment of fans.

Not letting it bring him down, the rapper shifted his focus from recording his own music to building his label, Grade A Productions. In partnership with his brother, Lil Bibby’s label secured upcoming stars who have seen great success, including their first signee, Juice Wrld.

Juice WRLD released his debut studio album “Goodbye and Good Riddance” under the label as well as three singles, “All Girls Are The Same,” “Lucid Dreams,” and “Lean Wit Me.” He also grabbed a number one spot on the U.S. Billboard 200 chart with his second solo album ‘Death Race for Love,” before releasing two more singles called “Robbery” and “Hear Me Calling” before his unexpected passing on December 8, 2019.

Grade A went on to release posthumous projects from the rapper. The first was the album Legends Never Die and then three singles “Righteous,” “Tell Me U Luv Me” featuring Trippie Redd, and “Life’s A Mess” featuring Halsey. Then they released a second album called “Fighting Demons” on December 10, 2021.

Other posthumously released works from Juice included “Smile” with The Weeknd, “Real Shit” with Benny Blanco, and “Reminds Me Of You” by The Kid LAROI featuring Juice WRLD and “Bad Boy” with Young Thug.

The success of Juice WRLD reflected positively on Grade A and Lil Bibby. However, Lil Bibby has not released any new music since 2017. However, when asked in 2019 if he was done making music, the rapper replied:

“Nah, if I get out of my contract… It’s easy for me and I still got stories. I feel like, I don’t know too many people that seen or been through the stuff I have been through.”

In 2016, rumors surfaced that Lil Bibby was dating social-media star, Johanie Taylor. At first, the couple denied the rumors; however, a video of them together in bed surfaced, resulting in the pair confirming the rumors. Unfortunately, the relationship appeared to end shortly after.

Lil Bibby then went on to date model, song producer, and CEO of the online shop Anaistine, Cydney Christine, in 2018. However, in 2021 their relationship ended, and Cydney Christine took to Twitter in a now-deleted rant to vent about the relationship claiming Bibby was cheating and abusive.

Bibby appeared to respond to her allegations with a cryptic post reading, “Choose wisely. Seeing everything and saying nothing.”

Christine later retracted her tweets and posted: “My actions on social media have been childish and unacceptable.. but I’ll never tolerate harassment when all I’m asking for is peace.” Christine was briefly linked with Trey Songz after they were spotted together in 2021. However, no relationship came from the rumors.

Aside from the woman he is romantically linked to, there is one other who plays a part in Lil Bibby’s life. His mother, who has kicked her addiction, currently lives with the rapper despite him claiming she continues to get more violent as she ages.

The renowned rapper, who is 5′ 10″ (178 cm) tall and weighs about 150 pounds (68 Kg), serves as a role model for many aspiring artists looking to burst into the music industry.

While he currently has no awards to his name, his massively successful musical endeavors leave fans hopeful that his talent and hard work will bag him a few accolades in the future.

Lil Bibby net worth currently sits between $6 million and $8 million in 2022. The digital downloads of his mixtapes are his most significant source of income.

This is followed closely by revenue made through his Grаdе А Рrоduсtіоnѕ muѕіс lаbеl, and then endorsements, brand deals, and merchandise sales which form the rest of his income.