Larray’s Net Worth | How Much Does He Make?

Larray’s net worth over the last few years has grown along with his fame. The Viner-turned-Youtuber has been a fan favorite for many years and has somehow managed to stay in the limelight.

Despite Vine coming to an unceremonious end when it was discontinued, many of its most loved stars managed to transition to new platforms and successfully took their audiences with them. This was no different for Larray.

Having had over 100,000 followers before Vine was discontinued, Larray has since established a successful Youtube career with an extensive social media presence across platforms. Here is everything we found out about Larray’s net worth, personal life, and career.

Born Larri Merritt on July 22, 1998, he is professionally known as Larray. The American YouTuber rose to fame for his comedic Vine videos.

At one point, Larray joined the TikTok collaborative group called The Hype House but left pretty quickly and focused on his solo career instead.

The social media personality currently has over 8 million subscribers on YouTube, and in February 2018, he dipped his finger into the music industry by releasing an original song called “First Place.”

Larray was born at Kaiser Hospital in Compton, California, and grew up in nearby Oakland, California.  The British-Irish social media icon often mentions his mother online but has not revealed much about his father.

However, he once posted an Instagram post on Father’s day with pictures of him. In an interview with AwesomenessTV, he revealed that he had thirteen siblings. More about them later.

Story Behind The Name Larray

In the same interview with Awesomeness TV, Larray revealed how he chose his screen name while explaining how to pronounce it.

He explained that he used to be a Miley Cyrus fan account, and despite people pronouncing Larray wrong, he initially intended it to be a combination of his name and Miley Ray Cyrus’s; thus, Lar-ray Cyrus was created.

The young star started as a hilarious Viner creating snippet-length videos about his life. He then branched out onto social media platforms as his popularity grew on the platform. Branching out helped him secure a decent-sized audience on his YouTube channel before Vine became defunct.

Over the years, he had gained more than six million subscribers on his YouTube channel and over twelve million followers on his TikTok account. He bagged a nomination for the Breakout Creator category at the 2019 Streamy Awards. By 2020, he released three songs called “First Place,” “Last Place,” and “Canceled.” His songs secures spots in the Billboard Comedy Digital Tracks chart for 42 weeks before Billboard removed the chart from their list.

This growth helped him land a spot as a member of The Hype House in January 2020. The Hype House is a group of teen TikTok personalities living in Los Angeles, California. The name also refers to the mansion that some of the creators in the group live in together. It is meant to be a collaborative content creation house to enable multiple influencers and content creators to work together and create content easily.

Among the members were the wildly popular TikTokers, the D’Amelios sisters, and Larray. However, in May 2020, the D’Amelios’ representative revealed the sisters had left The Hype House as it “started to become more of a business.”

Not long after their announcement, Larray also confirmed he was leaving the group in his Livestream.  He left the collective less than a year after joining. Despite the drama surrounding The Hype House, Larray’s career continues to flourish.

Larray is generally quite open about his life and very honest with his fans. However, he has managed to maintain the privacy of his family, leaving some questions unanswered for fans, especially with regard to his siblings and parents.

In particular, questions about his parents began in 2020 on Father’s Day when the Youtuber posted an Instagram photo that appeared to be him with his dad. The series of older photos showed Larray as a young child with his dad and showcased their love for each other.

However, his caption not only celebrated the day but also revealed that the star missed his father. This left Larray’s fans and friends thinking his father had died. Despite the speculations, Larray revealed no further details nor addressed any questions.

Nevertheless, Avani Gregg, Tana Mongeau as well as his other friends and fans flooded his comment section with heartfelt messages of support and sympathy. One fan tried to reassure the star that his father was still looking down on him.

However, later that year, in December, fans began to speculate about the possibility that Larray’s father had been in prison. The speculation was sparked after Larray posted a tweet claiming his father was released from prison.

He accompanied the tweet with a screenshot of what looked like text messages between them. If the image is real, then Larray’s father is still alive, and his Instagram post on Father’s Day could have been referencing him being unable to see him.

Regardless of his sweet IG post for his father, fans have often felt tension between them as some of Larray’s past tweets hint at trouble between him and his father. Some also allude to them having a rocky relationship; however, there is no way to know for sure if the star is joking or really airing out his laundry.  For instance, in 2018, he tweeted a joke comparing his dad to One direction and saying they both claimed they’d be back but never returned.

He opened up to AwesomenessTV in an interview om YouTube about the most asked questions related to him on Google. One question asked how many siblings the star had. He took a moment to think before revealing that he has 13 siblings and revealed that most of them are from his father’s side as he’d “been around the block.”

Despite his rocky relationship with his dad, there is one family member he speaks of fondly. That is his mother, whom he appears to be very close to and often shares her funny thoughts and comments about him.

He also appears to be quite close to his grandmother, who appears in many of his YouTube videos. Whether it’s getting her to learn trending dances on TikTok or filming her opinions about his music, the star finds ways to include her in his channel.

Aside from his family members, Larray also has a close group of friends. His closest friend is his best friend, Issa Christopher Tweimeh. Issa is best known by his YouTube pseudonym Twaimz. However, he has since quit YouTube despite his popularity.

Over the years, Larray has built up his self-confidence and been inspired by his followers to be open about his sexuality. The now openly gay YouTuber took a while to talk about his sexuality and relationships openly but has come a long way from when he first started sharing his life online.

He began dating Braddy Potter in 2019. Both already had well-established social media platforms when they started dating in April 2019 and were extremely happy. Larray tweeted:

Unfortunately, things came crashing down in 2021, and their split was announced in September 2021 on Twitter. Larray also asked people to respect their discussion anf give them space to figure things out. He ended his announcement saying “Hate is the last thing he deserves, please be kind.”

Nearly a year before his breakup, Larray faced a different challenge. When Nikita Dragun threw him a surprise birthday party on July 21, 2020, controversy arose for the then-Hype House member. The party which was hosted during the COVID-19 pandemic failed to adhere to regulations that where in place at the time.

The party was attended by multiple social media personalities, including James Charles, Charli D’Amelio, and Dixie D’Amelio. At the time, California was struggling to contain the pandemic outbreak, and the number of cases was even more than New York’s.

With nearly sixty-seven people at the party and pictures of many not wearing a mask despite the recommendations of local health authorities, fans were furious. As images and videos of the party quickly circulated on social media platforms like Instagram,  Larray, Nikita, and others in attendance were bombarded with criticism from the public and other influencers including Tyler Oakley and Elijah Daniel.

Larray eventually came forward with an apology, as did some of the other attendees. Those living in the Hype House at the time also decided to get COVID-19 tests. They all came back negative, much to the relief of fans.

Coming in at just under the average height for men, Larray stands at a formidable 5 ft 7 inches tall. The Youtuber weighs in at sixty-two kilograms or one hundred and thirty-seven pounds, and he wears a size eight shoe. 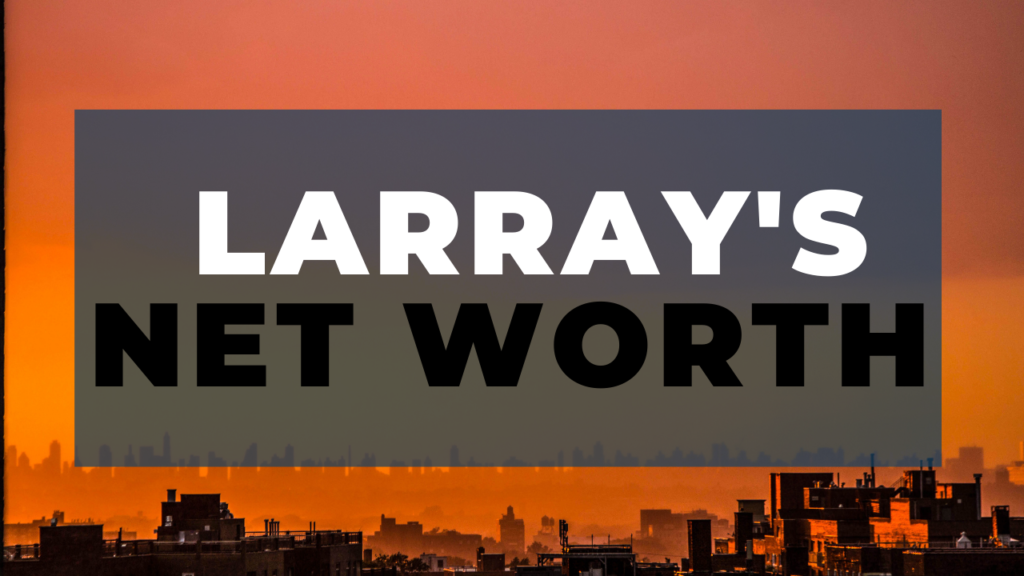 As one of the richest YouTube stars out there, it’s no surprise that Larray’s Net Worth has raised a fair number of eyebrows. He is listed as one of the most popular YouTube stars, and according to the likes of Wikipedia, Forbes, and Business Insider, Larray’s net worth currently sits at approximately $1.5 Million.