J. R. Smith net worth is estimated to be at about $35 million. The massive scale of J. R. Smith’s net worth is due to his many years as a highly paid professional basketball player. 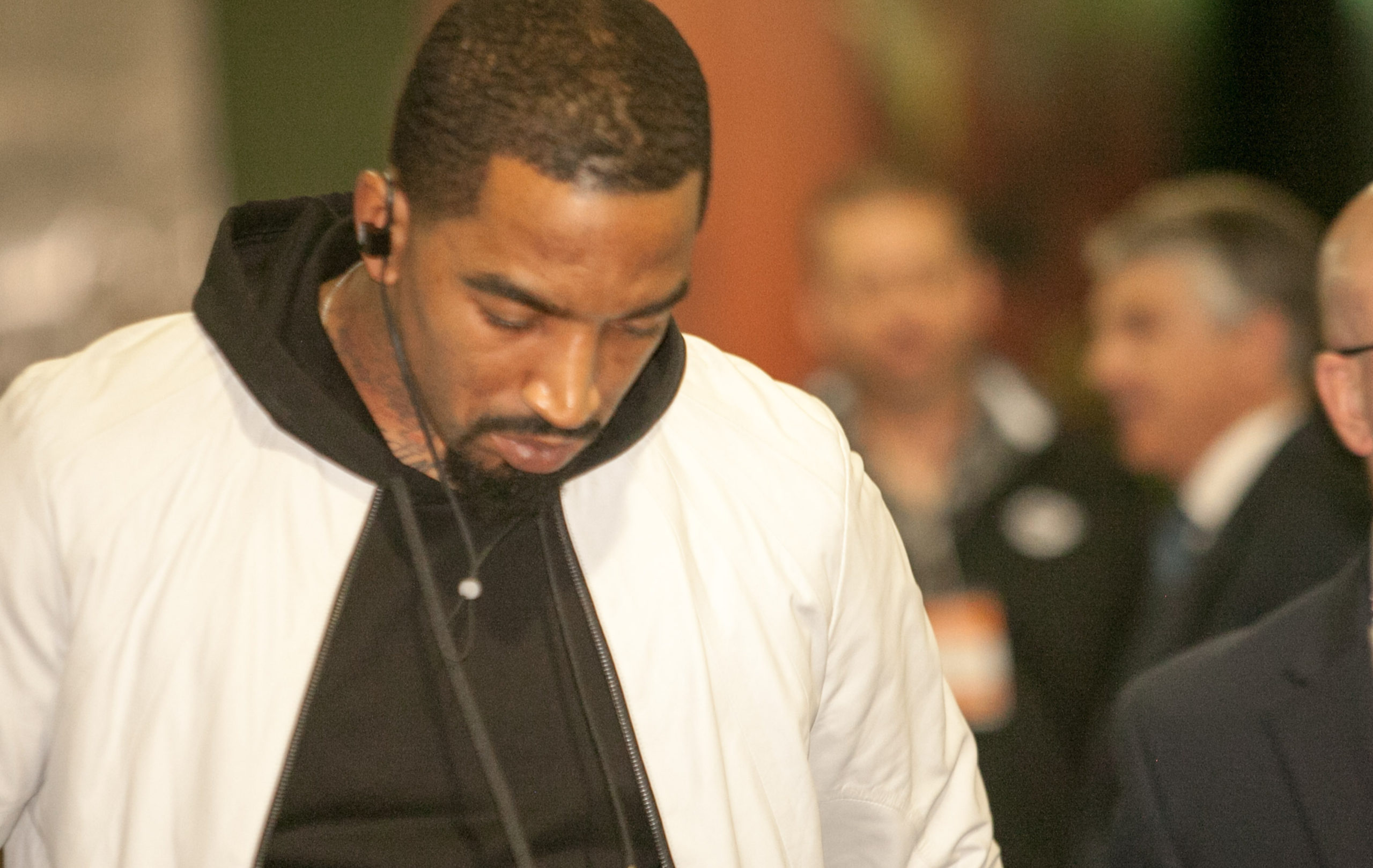 J. R. Smith is a former pro basketball player. His full name is Earl Joseph “J. R.” Smith III. He has played for a number of teams over the years, including the New Orlean Hornets, the Denver Nuggets, the New York Knicks, the Zhejiang Golden Bulls in China, the Cleveland Cavaliers and the Los Angeles Lakers. He also won one National Basketball Championships a piece while playing on each of those last two teams listed.

In 2004, the New Orleans Hornets signed J. R. Smith on, as the eighteenth selection in the draft. An impressive three times in a row, Smith was declared the Western Conference Rookie of the Month. He then went on to finish in third place in the 2005 NBA Slam Dunk Contest.

Over the course of seventy six games, J. R. Smith averaged 10.3 points. The next season, his average went down to 7.7. and he began to butt heads with the coach of the Hornets, Byron Scott, who considered him a poor team player. After beginning the season in a the prestigious position of starting shooting guard, Scott completely took him out of rotation by the end of the season.

Having had enough of him, the Hornets then traded him to the Chicago Bulls, a situation that lasted a mere six days. In less than a week, the Chicago Bulls had traded him to the Denver Nuggets. His troubles didn’t end there, however. He was suspended for 10 games beginning in mid-December due to getting involved in an infamous melee with the Knicks at Madison Square Garden.

He then had to miss yet another 8 games beginning in late February of the next year, although this time not through his own fault but due to knee surgery. Then, after returning, the coach benched him for the fifth game after he proved to be making numerous mistakes in the first four games of the play-off series vs the San Antonio Spurs.

He did much better in the next season, however. From 2007 to 2008, he hit some lifelong highs, and the following season he reached an average of 15.2 points over the course of eighty one games. He ultimately finished in second place that year for the NBA’s 6th Man of the Year Award. He then got third place in the NBA Slam Dunk Contest.

13 April 2009 proved to be a particularly auspicious day in J. R. Smith’s carer and life. He scored forty five points, which proved to be his career high, as well as eleven three-pointers (a franchise best), thus helping win the Northwest Division title for the Denver Nuggets, thanks to a 118 to 98 win. Their opponents were the Sacramento Kings.

He then made the highest score of the season, getting forty one points in a game his team played vs. the Atlanta Hawks. This is what truly gave him his legendary status, as it made him only the first ever National Basketball Association player to have multiple games with three-pointers of 10+.

His average by the end of that momentous season was 15.4 points/game. He did nearly as well the next year.

In 2011, however, the infamous NBA lockout occurred, which led to the end of his time with the Nuggets and the beginning of a year-long period where he actually played for the Chinese Basketball Association, as a member of the Zhejiang Golden Bulls. The deal was worth approximately three million dollars.

His NBA career resumed again in February of 2012, when the New York Knicks signed him on for the remainder of that current season. He signed up again for the following season. Over the course of this season, his average was 18.1.

Perhaps the most impressive achievement, however, was when he posted three 30 point games in a row off the bench. The previous time a player did that was twenty three years before. This led to him finally winning the 6th Man of the Year Award.

He signed with the team yet again for the next season, but was forced to miss multiple games at the start of the season due to using drugs. After that snafu, however, he came back and did extremely well. In one game, he managed to score 9 three pointers, which tied the team’s all-time record. He then achieved twenty one 3-pointers in one game, breaking an all-time record for the NBA.

The Knicks then traded him to the Cleveland Cavaliers in early 2015. He ended up being a major reason that the Cavaliers go to the NBA Finals that year, however they ultimately lost. But he signed up with the team again in 2015, playing seventy seven games that season. That year, he managed to rank 7th in the entire league for three pointers, setting a whole new record.

That year, he also broke a record for franchise play-offs with sixty five 3 pointers. He led the team to the first NBA title they ever achieved, at the NBA finals.

He signed yet again in 2016, agreeing to a 4 year deal that was worth fifty seven million dollars. He then reached a bit of a slump, as well as fractured his thumb, which needed surgery and caused more issues. He bounced back, however, and was a large part of the reason they got to the NBA Finals again, even though they ultimates lost to the Warriors.

2017-2018 started out a bit rough for Smith, but he recovered with some great scores after the first set of ten games had finished, breaking numerous records that season, although he was then suspended again when, in a fit of anger, he threw hot soup, nearly harming an assistant coach. He also made a fatal error, costing his team a major game at one point.

From that point on, they began to reduce his role with the team, and from that point on, he left and ended up with the Los Angeles Lakers in 2020. It was here that he’d end up winning the second National Basketball Association championship he was part of. His team managed to win against the Miami Heat.

Coolio Net Worth – How Much Is He Worth?

J. R. Smith was born in New Jersey, in Freehold Borough. His birth date is 9 September 1985. He grew up, however, in New Jersey’s Millstone Township, in the Clarksburg area. As a freshman in high school, he attended Steiner High for the first half of the school year, but then soon after that transferred to McCorristin Catholic High for the second semester.

Although he focused on his first love, basketball, he also proved quite adept at playing both baseball and football, but by his senior year, had left those two sports behind completely. The University of North Carolina recruited him for their Tar Heels Men’s Basketball program.

Unlike the many athletes that have capitalised on a basketball scholarship (like Christy Martin), ultimately J. R. chose to go down a different path. After he did extremely well in his senior year of high school, and even won the spot of Most Valuable Player (shared with Dwight Howard) at the big McDonald’s All-American Game in 2004, he chose to skip university all together. Instead, he made the bold move of immediately declaring for the National Basketball Association draft that year.

J. R. Smith has a dad, Earl Smith, and mom, Ida Smith. He also has two brothers, Chris and Dimitrius, and two sisters, one of whom is named Stephanie. Chris and Dimitrius would also go on to be basketball players. Chris was actually on the same team as J. R. in the Knicks line-up from 2013 to 2014, and Dimitrius played for Monmouth U.

J. R Smith has three children, all three of whom are daughters. The oldest, Demi, was from a previous relationship to his current marriage to Jewel Harris. They’ve been together since August of 2016 and since getting married have also brought Peyton Smith and Dakota Smith into the world.

Dakota was born prematurely by five months, weighing at only a single pound when she was first born (.454 kilograms). This was, naturally, an extremely trying time for J. R. Smith, his wife, and the rest of his family, but Dakota managed to pull through, even though the odds were against her.

According to The New York Times, Smith may have more tattoos than any NBA player in history. He currently has somewhere around seventy, having gotten his first when he was a mere 15 years old. They have become so iconic that in 2016, a clothing company even produced a T-shirt that makes it look like the wearer has Smith’s tattoos on their body.

Smith supported Hillary Clinton’s 2016 bid to be president of the United States, and even appeared at a campaign rally for her in Cleveland with his entire family.

In 2021, he decided to complete his education by attending North Carolina A&T State University. In addition to studying, heh also joined the university’s golf team, the Aggies. Smith regularly posts pictures of himself golfing to his Instagram.

Numerous controversies have followed J. R. throughout his career, some of which we covered in the career section, including his sometimes violent tendencies, short temper, and use of drugs. He was also involved with numerous car accidents over the years. In one of the more unfortunate occurrences, Andre Bell, who was his best friend, died, in 2007.

J. R. Smith doesn’t have as active a social media presence as some other celebrities, only really being on two main platforms, namely Twitter and Instagram. However, he is very active on those platforms, and has a particularly huge follower list on the latter.

J. R. Smith does not seem to have a public Facebook account at the present time. Should this change in the future, we will be sure to update this information on this page.

J. R. Smith has a public verified twitter account, where he tweets under the handle @TheRealJrSmith. On this platform, he has 788.3 thousand followers, and is currently following 1,858 people himself. He mainly uses his account to post funny observations, life updates, plugs for various projects, and retweets of fans. He seems very engaged with his fan base and seems to enjoy speaking directly with them on this platform.

J. R. Smith is on Instagram under the @teamswish handle. On this platform, he has an impressive 6.1 million followers and is himself following 2,422 individuals. He posts photos of himself, his friends and family, and plugs for various projects on Instagram.

As with Facebook, J. R. Smith does not seem to have a public LinkedIn account at the present time. Should this change in the future, we will be sure to update this information on this page.

J. R. Smith does not seem to have a public TikTok account at the present time. Should this change in the future, we will be sure to update this information on this page.

J.R. Smith stands at a staggering 6 feet, 5 inches tall, which is 198 in centimeters. His weight is estimated to be at about 225 pounds, or 102 kilograms. His eye color is dark brown and his hair color is black.