Herschel Walker Net Worth – How Much Does He Make?

Herschel Walker’s net worth estimate currently stands at $12 million. Herschel Walker net worth is sizeable and can be attributed to a life dedicated to many physical sports. Although now retired, Walker used to be a professional football player and has many other achievements under his belt. 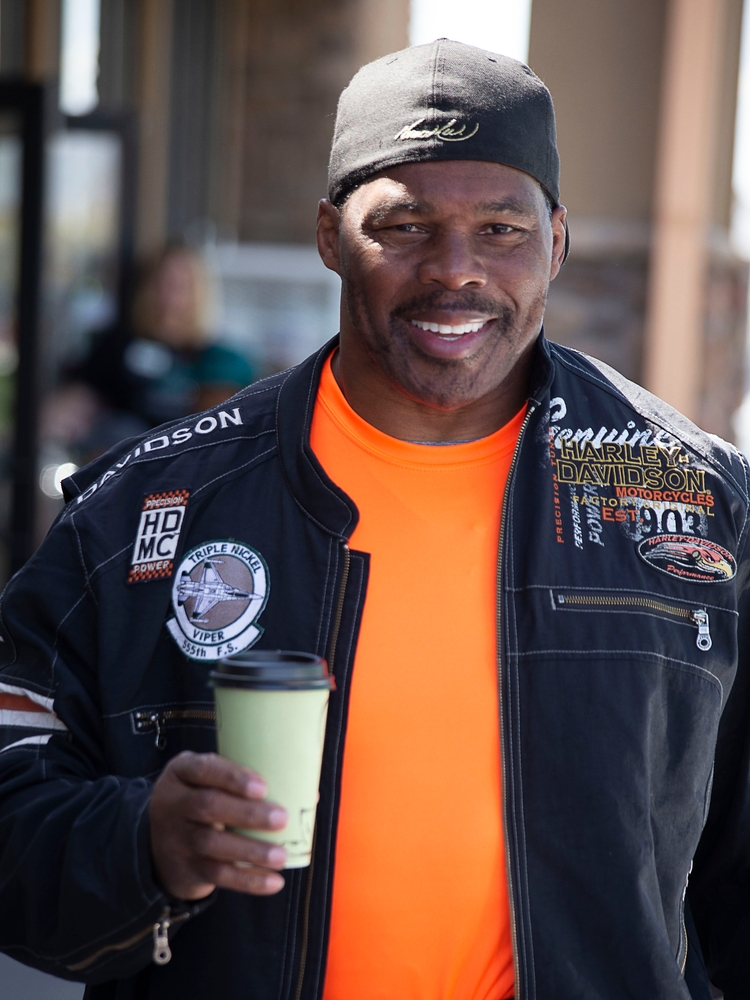 This article will explore Herschel Walker’s net worth and how he accumulated it. It will also delve deeper into his career, early life, personal life, and family, as well as his achievements.

Who is Herschel Walker?

Herschel Walker was born on 3 March 1962 and, first and foremost, he is a retired American football player. However, Walker is also a renowned bobsledder, mixed martial artist, and sprinter.

Nowadays Walker serves as the co-chair of the President’s Council on Sports, Fitness, and Nutrition. And he has his background in sports to thank for that. He was appointed under President Trump, who is a close friend and is continuing in the position under President Biden.

Herschel Walker’s football career kicked off in college when he played for the University of Georgia. He earned All-American honors three times and also received the Heisman Trophy in 1982. Herschel Walker is widely regarded as one of the best college football players of all time. He is ranked number one in this category by the Bleacher Report, Sporting News, and 247sports.

Herschel Walker’s professional football career kicked off with the New Jersey Generals of the United States Football League. After that, he joined the National Football League (NFL), first with the Dallas Cowboys. In 1989, Herschel Walker became the focus of a massive trade to the Minnesota Vikings.

However, during his career, Walker also played for the New York Giants and Philadelphia Eagles. In 1999 he was inducted into the College Football Hall of Fame.

Herschel Walker’s net worth is estimated to stand at $12 million. Walker is considered to be a wildly successful football player and his net worth can be attributed to that. In 1983 he signed a three-year contract worth $5 million with the New Jersey Generals. This was considered an unprecedented level of success for someone in the football industry.

It was so unheard of that the USFL, who Walker played for then, had a $1.8 million cap on salaries. In order to circumvent this number and earn his $5 million, Walker’s deal was restructured. Part of his contract was signed as him providing separate personal services to the team’s owner. The team was then owned by a Dallas oil tycoon called J. Walter Duncan.

Once the USFL disintegrated in 1985, Walker managed to sign another $5 million contract for 5 years. This time the contract was signed with the Dallas Cowboys and Walker would play the 1986 season.

In 1995, Herschel Walker was already a renowned American football player and on the hunt for a new engagement. He then got signed to the New York Giants for three years with a $4.8 million contract.

Herschel Walker used to be a professional athlete and, as such, is built exactly as you would expect. He is a large and strong man whose stature has been built over years of physical activity and strenuous sports.

Herschel Walker was born in Augusta, Georgia on 3 March 1962. Although born in Augusta, his parents raised him and his six brothers and sisters in Wrightsville, Georgia. Herschel Walker attended the Johnson County High School and early on excelled in sports. He was successful as a student-athlete and also dabbled in basketball and football as well as track.

Walker was set on a career in football when he played for his school football team in senior year. During this year he rushed 3167 yards in total and this tremendous effort helped secure his team their first-ever state championship. After this early success, Walker was on a trajectory for a successful professional football career.

Herschel Walker was born to parents Willis and Christine Walker. In total, the pair had seven children. In 1983, Herschel Walker married his college sweetheart Cindy and they had a son called Christian Walker. Walker was married to Cindy DeAngelis Grossman for 19 years before getting a divorce.

In 2010, Walker began seeing and then dating Julie M. Blanchard. Blanchard used to be an executive on ESPN. The pair are currently engaged to be married and co-habiting in Westlake in Texas.

Herschel Walker had a very successful start in life and graduated from high school as the valedictorian. Following his school years, Walker went to the University of Georgia and immediately started playing football. The football field was where he felt most comfortable and he certainly had the talent. He soon became a star player as the running back on the varsity football team.

As mentioned, Herschel Walker received many accolades as a football player in college. He received the All-American honors three times, received the Heisman Trophy in 1982, and also won the Maxwell Award.

Walker may only have played college football for three years but in each of the three seasons, he finished in the top three of the Heisman voting. This makes him the only player in NCAA history to ever achieve this tremendous accomplishment. He was also the first NCAA player ever to only play for three years and still finish in the top 10 in running yards.

Many consider Herschel Walker to be one of the great college football players of all time. He was inducted into the College Football Hall of Fame and left to pursue his professional football career.

Although he was studying towards a Bachelor of Science in Criminal Justice, he abandoned this to play for the USFL. This is something that often happens to professional athletes and is not unheard of.

Herschel Walker’s net worth can be attributed to his very successful professional football career. He kicked off his professional career trajectory by playing for the New Jersey Generals in the USFL. During this time, he won the USFL’s rushing title in both 1983 and 1985. The Dallas Cowboys foresaw the collapse of the USFL and contacted Walker in 1985.

The Dallas Cowboys were right and the USFL did indeed collapse. However, Herschel Walker was protected and drafted in the fifth round for the Dallas Cowboys. He went on to join the Cowboys and play in their 1986 season.

The start of Herschel Walker’s time with the Dallas Cowboys was inhibited by teammate Tony Dorsett. Dorsett felt dissatisfied with the fact that Walker had joined the team, thereby cutting his playing time and earnings. Eventually, Dorsett left to join the Denver Broncos and Walker could really come into his own on the team.

In 1988, Herschel Walker played seven different positions for the Dallas Cowboys. This included fullback, halfback, tight end, wide receiver, and H-back. He managed 1512 rushing yards and 505 receiving yards. He was only the tenth player in history to generate more than 2000 combined rushing and receiving yards in one season for the NFL.

The Dallas Cowboys traded Herschel Walker for five players to the Minnesota Vikings in 1989. This was in addition to six future draft picks. This massive trade became known as the HWT – the Herschel Walker Trade. The Vikings saw this trade as their opportunity to secure a run in the Super Bowl.

Unfortunately, things didn’t quite pan out that way and the Cowboys were the true winners of the trade. Nowadays this trade is considered to be one of the most lopsided trades in the history of the NFL.

Nearing the end of his career, Herschel Walker played for the Philadelphia Eagles in 1992 for three seasons. After that, he played for the New York Giants in 1995 after receiving a three-year contract for $4.8 million.

Herschel Walker’s NFL career came to an end when he rejoined the Dallas Cowboys in 1996. He retired soon after the 1997 season thereby ending his NFL career with the same team that started it. 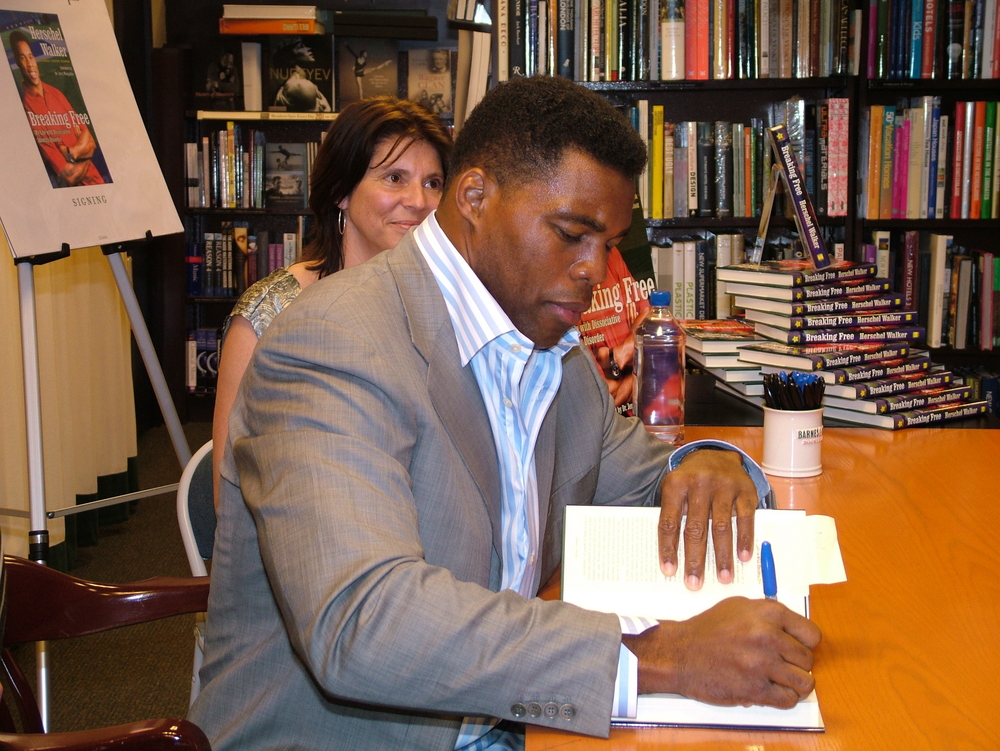 As mentioned earlier, Herschel Walker may have been a professional football player, but he had other athletic pursuits as well.

During his time with the NFL, in 1992, Herschel Walker entered the Winter Olympics in Albertville, France. He competed as a member of the USA men’s bobsledding team. Walker competed with teammate Brain Shimer in the two-man bobsledding event, finishing seventh.

In 2009, Herschel Walker signed with a mixed martial arts promotion company called Strikeforce. He was listed as a competitor in the heavyweight division.

Walker trained for twelve weeks with the American Kickboxing Academy and then made his debut in MMA in 2010 against Greg Nagy. Walker was the winner of that first fight. He also won his second fight a year later in 2011 against Scott Carson. Herschel Walker had a talent for martial arts and also holds a fifth-degree black belt in taekwondo.

Herschel Walker’s net worth is impressive and it can be attributed to his longstanding football success. He has also achieved success in other sporting fields as well and has recently turned his attention to politics.

Herschel Walker is running as a Georgia Republican candidate for the US senate. On paper, Herschel Walker seems like the perfect political candidate. He is a football hero and used to be a household name when it came to the game. He also had a long relationship and career with the NFL which is a highly regarded pursuit in America.

Nowadays he is a proud business owner and he has conservative backing from former President Donald Trump who is a long-time friend of Walker’s. On top of all that, he is a Black Conservative, which, all in all, puts him in a very favorable position.

The Georgia seat is a very high target for Republicans in politics. Many believe Herschel Walker’s potential bid to be a wildcard. There are two potential outcomes and they vary greatly. Walker may see an easy win in the GOP primary as he has the backing of Trump. But there is a history of mental illness and alleged abuse that may hurt Walker’s political campaign.

There are those that state that Herschel Walker’s difficult past may come back to haunt him during the elections. Walker wrote a book in 2008 entitled Breaking Free which detailed his diagnosis with dissociative identity disorder (DID) seven years earlier. This illness was formerly known as multiple personality disorder and many worry that this will hinder his political aspirations.

Although he came from a loving and stable home, Walker was bullied at school. He was an overweight child and stuttered which rendered him bullied and beaten. The raw account in the book details his mental illness as stemming from a need to separate himself from this part of his life.

Later in life, Herschel Walker also admitted to being unfaithful to his wife and details struggling with worsening rage. Fortunately, he always had physical sport as an outlet for his emotions. However, nowadays Herschel Walker seems stable and is fully engaged in his political campaign.

Herschel Walker is a retired American football player with a career trajectory that includes a long-standing relationship with the NFL. He has also competed in the Winter Olympics as part of the USA bobsledding team and has experience in mixed martial arts.

Herschel Walker’s net worth is estimated to stand at $12 million and most of it stems from his football career.
Nowadays Herschel Walker is a successful business owner and is running for the Georgia Republican seat in the US senate.