Heart Evangelista Net Worth – How Much Is She Worth?

Heart Evangelista net worth is estimated to be between $3 million and $4 million. The manner by which Heart Evangelista’s net worth reached this number is due to the money she earned as an actress, model, influencer, and artists, along with her various businesses, marriage, and wealthy family.

Who is Heart Evangelista? 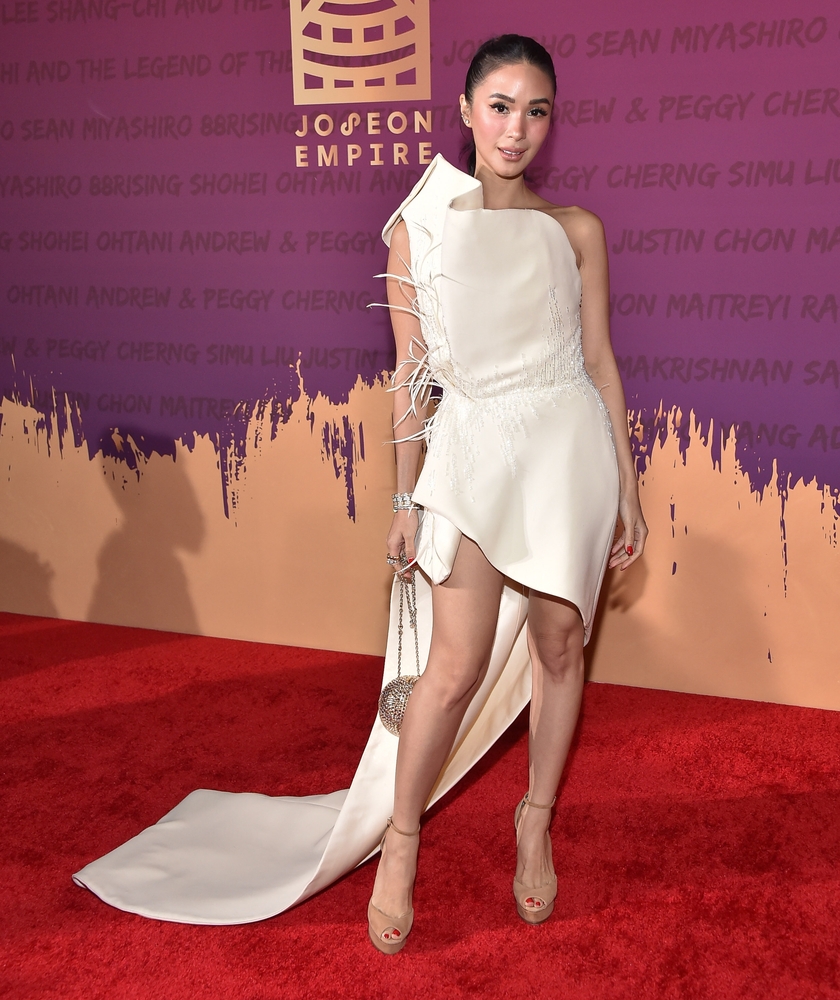 Heart Evangelista is the stage name of Love Marie Payawal Ongpauco, who is an actor, artist, former model, socialite, and business woman from the Philippines. She has acted in a large number of films and television shows including Bcuz of U, Trip, G-Mik, Mulawin vs. Ravena, Luna Mystika, and Ay Ayeng.

Heart Evangelista is also a painter whose work has appeared in solo exhibitions in major art galleries and museums in the Philippines.

Heart Evangelista net worth comes from her career success. Beginning in 2000, when Heart Evangelista was 15 years old, her career really took off when she was cast on the TV show G-mik, where she co-starred with John Prats. They were so popular together, they went on to both also appear as love interests in Trip, then Ang Tanging Ina, then My First Romance, then Berks.

Due to the huge popularity of what in Filipino media is known as a love team, Heart Evangelista and John Prats won an award for Most Popular Love Team of RP Movies, given to them by the Guillermo Mendoza Memorial Scholarship Foundation’s 33rd award show.

Additional awards given to Heart Evangelista at this point in her career were the Star Awards form TV and Star Awards for Movies giving her the Best new Female Personality honor for Best New TV Actress and Best New Movie Actress.

Around this time, Heart Evangelista also released music. Her song called “Love Has Come My Way” was so beloved by her fans that she won a Himig Handog Award in the Texters and Listeners Choice categories. Meanwhile, her next song, “Tell Me” was also a hit, and even reached the eighteenth spot on Australia’s music charts.

Four years after Heart Evangelista and John Prats’ team up and relationship began to grow stale, her management decided it was time for her to move on. Therefore, in 2004, they found her a new partner in the form of Geoff Eigenmann. They starred together in a film called Bcuz of U.

This film was loosely based on a British film from 1964 called The Yellow Rolls-Royce, which in turn was based on a 1947 German film called In Those Days.

Heart Evangelista and Geoff Eigenmann next starred together on a TV show called Hiram. Their co-stars included Anne Curtis, Dina Bonnevie, and Kris Aquino. Her role earned her another award nomination by the Star Awards, this time in the category of Best Actress.

Heart Evangelista’s pairing with Geoff Eigenmann didn’t last long, however, as she instead joined with Jericho Rosales for the new show, Panday. He played Tristan, and she played his lover, Eden. They became an actual item in real life, as well, and were together as a romantic couple for three years.

Heart Evangelista then did a number of different projects in 2007 with the ABS-CBN company and appeared in a remake of the Filipino film Hiram an Mukha, as well as Pangarap Na Bituiin, and Muntik Na Kitang Minahal, which was a remake of the musical anthology drama series, Your Song.

The next set of roles for Heart Evangelista were the lead love interest in Codename: Asero, one of a set of twins in Luna Mystique, and another part in the soap opera Sine Novela: Ngayon at Kailanman. She then appeared in a show called Full House and a variety series featuring music called Party Pilipinas.

Next up, Heart Evangelista did a reality TV show for Christmas called Puso ng Pasko: Artista Challenge, then starred in the role of a dwarf on a show that was called Dwarfina, and then shared the screen with Lovi Poe and Alessandra De Rossi for a major series called Legacy which was an enormous critical hit.

Heart Evangelista then reunited with Geoff Eigenmann for a show called Forever, and then a sequel to Luna Mystika called Luna Blanca. Afterwards, Heart Evangelista again teamed up with Alessandra De Rossi in Magkano Ba ang Pagi-ibig?, and with Lovi Poe again in Beautiful Strangers.

Heart Evangelista also did a romantic comedy for television called Juan Happy Love Story, reuniting with Dennis Trillo, an actor she had co-starred with on Dwarfina.

Heart Evangelista’s next big project was Mulawin vs. Ravena and then My Korean Jagiya, which ran for one hundred and five episodes. She then appeared on the reality show, Real Crazy Rich Asian and was listed by People Asia as one of their People of the Year for 2018 through 2019.

Heart Evangelista is also a painter who has had many sold out solo exhibitions at prestigious places such as Galerie Joaquin and Ayala Museum in the Philippines, under her actual moniker, Love Marie.

Her shows have been called I am Love Marie: The Art and Works of Love Marie Ongpauco, and Love Marie: A Solo Exhibition of a World Class Filipina. She also did some of the artwork for a children’s book called Daughter of the Sun and the Moon by Rocio Olbes.

She has also released a line of handbags, which were hand painted by her. She also collaborated on the artwork for a book called Manila Was A Long Time Ago, with A.A. Patawaran. The book centered on her dog, Panda.

Angela Yee Net Worth – How Much Does She Make?

Heart Evangelista was born in the City of Manila, the capital city of the Philippines, on the fourteenth day of February in 1985. Her name at birth was Love Marie Payawal Ongpauco, her parents being Maria Cecilia del Gallego Payawal and Reynaldo Evangelista Ongpauco, a famous restaurant tycoon.

Heart Evangelista is the youngest child of her family. Her older siblings are Marjorie Ongpauco, Michelle Ongpauco, Lisa Ongpauco, Miguel Ongpauco, and Camille Ongpauco. Meanwhile, her aunt is Liberty Ilagan, who was a famous actor in the Philippines, particularly in the sixties.

After being born in Manila, Heart Evangelista’s parents moved the family to the United States when she was a young child, where they remained until she was a teenager. After they moved back to their place of origin, Heart Evangelista began a modelling and then acting career at the tender age of thirteen.

Heart Evangelista and Francis Escudero got engaged in late summer in 2014 and were married the next winter, in early 2015, on Balesin Island, which is located in the vicinity of Polillo, Quezon in the Philippines.

Four years later, Heart Evangelista and her husband made the announcement that they would be having their first children, a pair of twins. Tragically, however, she suffered two miscarriages not long afterwards, losing each baby one at a time.

Heart Evangelista officially became the First Lady of the Province of Sorsogon when Francis Escudero was elected in 2019. The day that he officially took office was the thirtieth of June of 2019.

Heart Evangelista began a foundation called Heart Can, in order to support kids who are suffering from various respiratory diseases.

She is also a strong advocate for the LGBTQ+ community. She won the Equality Champion Award from the Lagablab Network for helping to support the SOGIE Equality Bill, which passed and now provides legal protections to queer people in the Philippines, including protections for sexual orientation and gender identity.

Heart Evangelista is also an animal rights advocate and is an official spokesperson for the Philippine Animal Welfare Society, also known as PAWS.

Alice Eve Net Worth – How Much Does She Make?

Heart Evangelista net worth is not the only impressive thing about her. As a thriving influencer, she has a robust social media presence, particularly on Instagram. She uses her accounts mainly as vehicles to plug the various products, companies, fashion lines, etc. with which she has endorsement deals, and to sell herself and her luxurious celebrity lifestyle.

Given her status as an influencer, many of Heart Evangelista’s posts are photos of her using various expensive lavish products and advertising them to her followers, with links to the designers and companies that produced them. You will often find dresses, handbags, shoes, jackets, makeup, sunglasses, and more on display.

Heart Evangelista has an official public verified Twitter account. The account handle from which she tweets is @heart021485, which seems to imply that she’s had a Twitter for a long time, as one wouldn’t expect someone of her level of fame to have that sort of screen name.

Incidentally, the numbers in her account handle correspond to those of her birthday.

On this platform, Heart Evangelista has 2.6 million followers and is herself following only 378 accounts in return. Heart Evangelista’s tweets tend to consist of photos of herself, sometimes with famous, influential people in the celebrity and fashion worlds, plugs for herself and her work, and retweets about them.

Heart Evangelista will also often do the same sort of posts that are actually plugs for different products and companies, as she does on Facebook.

Heart Evangelista has an official public verified Instagram account. Her account name on this platform is @iamhearte, presumably short for I Am Heart Evangelista. This is by far her most popular social media account. On Instagram, she has a whopping ten million followers, and herself is following 2,849 accounts in return.

Heart Evangelista’s Instagram, befitting an influencer of her status, is full of expensive products such as dresses, fashion, handbags, makeup, wellness products, jewelry, and more that she is plugging. It’s also full of glamour shots of herself, reveling in her life of glamor, comfort, and luxury. Its safe to say on of Heart Evangelista net worth was earned here.

Heart Evangelista does not seem to currently have a public LinkedIn account, which may be surprising given her various business enterprises, but she probably considers herself wildly successful enough to not require the sort of networking LinkedIn provides.

With that said, should she sign up for an account at any point in the future, we will be sure to update this page with the latest information in order to keep our readers apprised of all of the most recent Heart Evangelista news about her life and career.

Heart Evangelista has an official public verified TikTok account. Her TikTok account handle is @lme85, the L and M presumably for her first two actual names, Love Marie, and the E for Evangelista.

Heart Evangelista’s TikTok is full of videos of herself responding to fan questions, spending time with her dogs, luxuriating in her expensive lifestyle, plugging various products, sharing clips of various projects and commercials she’s involved in, and so on and so forth.