Constance Marie Net Worth | How Much Is She Worth?

Constance Marie has become a famous face in acting off her roles in several movies. Since her debut acting role as ‘Penny’ in the CBS series ‘Dirty Dancing,’ Constance Marie’s net worth and career have been on a constant upward trajectory.

This article will dive into Constance Marie’s net worth, her life and successful career, and other interesting trivia every fan should know.

Since her debut, she has remained an actress fans are always excited to see her take on new roles and star in new movies and TV shows. Her acting career continues to wax stronger as she ages. If she keeps her successful streak going, Constance Marie’s net worth is sure to keep growing!

Who Is Constance Marie?

A post shared by The Art of Kindness Podcast (@artofkindnesspod)

Constance Marie is an actress who is famous for her acting role in the sitcom ‘George Lopez’, which premiered in 2002. She was cast as  ofcharacter ‘Angie Lopez,’ the wife of the lead protagonist. Before her role in ‘George Lopez,’ she had previously gained fame as Marcela Quintanilla, Selena’s mother in the musical drama film ‘Selena’ released in 1997.

Constance Marie’s rise to fame was a bit serendipitous. Her career as a performer started in dancing, where she worked as a talented dancer. Her stint as a dancer set the foundation for her transition into acting and attracted talent spotters who adapted her dancing skills for musical dramas.

Constance Marie is also a vegetarian supporter and has raised her child to be a vegetarian. She is also an avid supporter of animal rights, appearing in PETA ads (People for the Ethical Treatment of Animals).

Constance Marie was born on September 9th, 1965 in East Los Angeles, California, and she spent her early life in the city for the most part. As a teenager, she showcased a propensity for dancing, and her love for dancing translated into a significant period with the Los Angeles underground breakdancing scene.

After being spotted as a dancer at a young age, she was featured in the musical ‘Cosmopolis’ in Japan for renowned experimental musician Ryuichi Sakamoto at age 19. After completing the musical, she returned to Los Angeles, where she was recruited to work as a dancer for David Bowie’s 1987 tour, ‘The Glass Spider Tour.’

Her acting career launched in n1988 after completing the tour with David Bowie. The director Boaz Davison enlisted her talents in producing the 1988 film ‘Salsa.’ Her career as an actress naturally progressed from that point onward, and she has become a household name in the movie industry.

Get the full lowdown on 2 Chainz – How Much is He Worth?

Constance Marie’s career time in the limelight started in 1988 after her role as a dancer in ‘Salsa.’ After being selected from a group of over 500 hopefuls as one of the dancers for David Bowie’s tour in the preceding year, she leveraged her newly found connections and landed the role. Later that year, she landed another role, but as an actress in ‘Dirty Dancing.’ Playing the role of the character ‘Penny’ in the CBS series.

Constance Mare landed her role as ‘Penny’ after the choreographer for ‘Dirty Dancing,’ Kenny Ortega presented her to the producer of the CBS series Steve Tisch. A role in the soap opera ‘Santa Barbara’ followed shortly after. She also guest-starred in several TV shows such as ‘The Man in the Family,’ ‘‘Jake and the Fatman,’ ‘Sibs,’ and ‘Hat Squad.’

Not long after her breakthrough as an actress, she began to land roles in feature films such as Garry Nava’s ‘My Family.’ Other notable movies and TV shows she has starred in include ‘Early Edition’ (1996), ‘Spin City’ (1996), and Ally McBeal (1997).

In ‘Spin City,’ she played the role of Michael J. Fox’s love interest. Gary David Goldberg, a reputable television producer, offered her the role. In ‘Early Edition,’ she played Detective Tony Brigatti’ for two seasons next to Kyle Chandler. 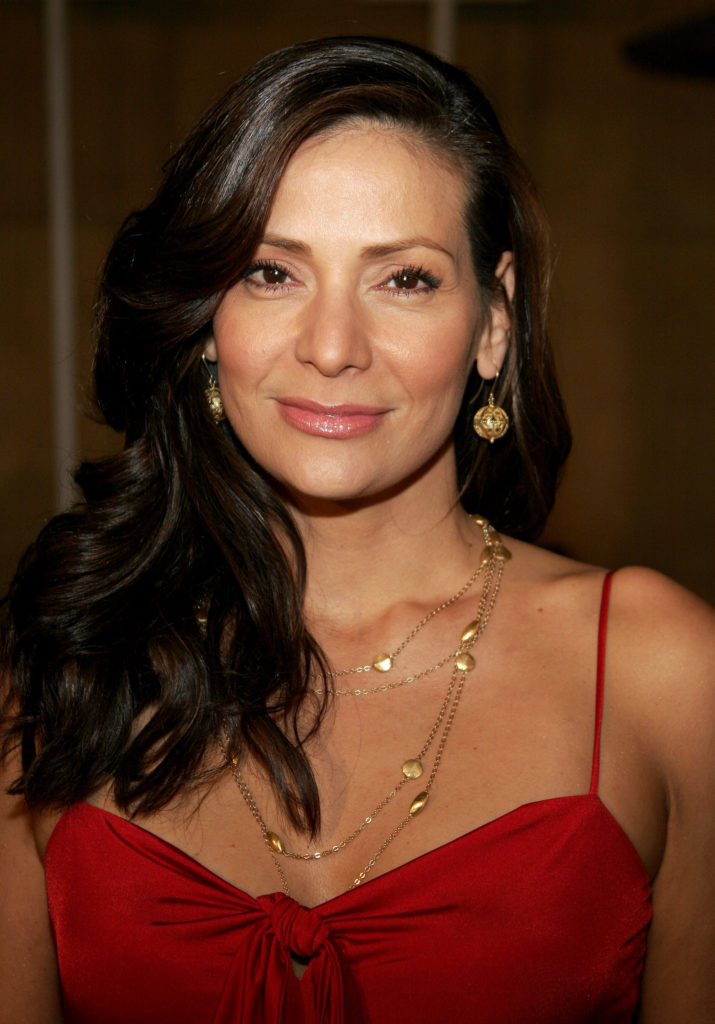 Constance Marie at the Los Angeles premiere of ‘The Good German’ held at the Egyptian Theatre in Hollywood, USA on December 4, 2006. Editorial credit: Tinseltown / Shutterstock.com

In 1993, she acted in the TV movie’12.01’, followed by other similar TV movies like ‘Island City’ and ‘Fast Company’ in 1994 and 1995. In 1997, another television movie titled ‘The Underworld’ followed and in the same year, she played the role of Gabriella Diaz in the series ‘Union Square.’

She won an Alma Award nomination for the Outstanding Female in a Comedy Series for her role as ‘Gabriella Diaz.’

Constance Marie particularly gained acclaim and popularity in 1997, when she played the mother of Jennifer Lopez in the movie ‘Selena.’

Marie had to undergo significant make-up to enable he play the role of Marcela in the movie since she was only a couple of years older than her on-screen daughter. Later that year, she was also offered a role in the ‘Early Edition’ series.

In 2000, she acted in “For Your Love” and the HBO movie ‘Dancing in September.’ Constance Marie continued to be a regular presence in the world of acting in 2001 with an appearance in the TV show ‘That ‘70s Show’ and the film ‘Tortilla Soup’ where she played the daughter of Raquel Welch.

‘Tortilla Soup’ received a nomination at the Alma Awards in the Outstanding Motion Picture category.

She was later offered two shows, “American Family’ and ‘George Lopez’ and she starred in both shows. In ‘George Lopez,’ she portrayed the much-beloved role of ‘Angie Lopez,’ the protagonist’s wife. She won an Imagen Award for her role amidst several nominations, most notably an Alma Awards Nomination for Best Actress in a Comedy Series.

‘American Family,’ in which she worked with other notable actors such as Edward James Olmos, Sonia Braga, Esai Morales and Raquel Welch, was later nominated for a Golden Globe award. In addition, the stoner movie/comedy ‘Puff Puff Pass’ released in 2006, also featured Constance Marie as the character ‘Montana.’

In 2010, Constance Marie was featured as Victoria Corrales in the TV movie ‘Class.’ The series ‘Switched at Birth’ was another major success.

The series received several nominations and award wins during its five-season run, with Constance picking up an Imagen Award, an ALMA Award and a Gracie Allen Award for “Best Supporting Television Actress’ for her portrayal of ‘Regina Vasquez.’

Other movies she was involved in at the time include the flick ‘Sweet Surrender’ and a voice role ‘Puss in Boots.’

In 2016, she played a recurrent role in the show ‘Angel in Hell’ and later in the NBC miniseries ‘Law and Order True Crime.’ In addition, she voiced a character in Disney’s animated series ‘Elena of Avalor,’ which was Disney’s first animated series to feature a Latina Princess and guest-starred in TNT’s ‘Animal Kingdom.’

Her more recent roles include an experience next to Rose Salazar in the Amazon rotoscope dramedy ‘Undone’ and the Netflix comedy ‘Alexa & Katie’. In December 2021, a new Latinx Comedy titled ‘With Love’ debuted on Amazon Prime. The new series featured Constance Marie and was written and created by Gloria Calderon Kellett.

The miniseries consisted of five one-hour episodes, each set during a different holiday. Constance Marie plays ‘Beatrice Diaz,’ a mother of two going through a midlife crisis and whose marriage to her husband is on autopilot. Constance Marie’s net worth has been on an upward trajectory due to her participation in a string of successful movies and TV shows.

Apart from her acting career, she has also dabbled into fashion with ‘The Constance Marie Collection,’ which she started in 2007. She is also an advocate for several organizations such as Planned Parenthood and Equal Pay for Women.

She is also the spokeswoman for the East Los Angeles Women’s Center, which helps women in her native city fight social injustices such as rape, domestic violence, and human trafficking.

Recommended reading:
Jenni Rivera’s Net Worth – How Much Is She Actually Worth?

She quickly recognized how roles handed to Latinos were mostly in the vein of victims seeking to be rescued.

She links this phenomenon to the lack of diversity off-screen and in places of influence in Hollywood. People of Latin descent are often underrepresented in the movie aspects of script-writing and production.

She denotes how most Latin projects are often restricted to international branches of big movie companies that are mostly bankrolled only for diversity’s sake.

These branches are often restricted by the small budgets earmarked for their operations, and they are not a priority for most streaming and movie companies.

Although Marie recognizes how the phenomenon has been cyclical, she feels that despite the industry taking baby steps in the right direction to correct the trend, they still have a long way to go before all is well.

Constance Marie’s concerns are well-justified by the Hollywood Diversity Report compiled by the University of California, Los Angeles (UCLA) and released in 2020. Despite Latinos making up 18% of Americans, only 5.3 % of people working in broadcast television identify as Latinos.

Despite the current culture of Latin underrepresentation, Constance Marie hopes that the increase in demand for streaming content will blow the doors open for Latinos and expand opportunities for Latinos to write, produce, direct and star in their own stuff.

Constance Marie takes pride in seeing other Latina actresses who are remarkably successful such as her ‘Selena’ and ‘My Family’ co-star Jennifer Lopez. She describes Jennifer Lopez as a ‘powerhouse’ and how Lopez’s ambition and hard work placed her on the right path for success.

Constance Marie became a mother in 2009 when she gave birth to her daughter Luna Marie. Unfortunately, she had difficulty getting pregnant for her daughter and had to rely on medical intervention through IVF.

Her ordeal made her passionate about helping other women with similar predicaments and made her knowledgeable about pregnancy and wellness.

In addition, she is also a proud vegetarian and has raised her child in the same vein. She tries to maintain a healthy lifestyle through regular exercises in the gym, walking and practicing yoga.

Her healthy attitude towards life includes a commitment to a green, environmentally conscious lifestyle that prioritizes recycling and composting. She has even started leaning towards veganism recently.

She also tries to be organic, using only organically manufactured diapers for her daughter and zero tolerance for Volatile Organic Compounds in her nursery. She also ensured that the mattresses in her home were organic and free of volatile toxins.

Constance Marie was previously in a relationship and engaged to the yoga instructor Kent Katich. They were together for fifteen years, from 2000 until 2015, when they called it quits.