Coi Leray Net Worth | How Much Does She Make?

Trap, twerking, pain music and a splash of rhythm and blues all wrapped up in a charismatic little burst of energy… this is Coi Leray.

The diminutive rapper burst onto the scene in her own unique way in 2019 and Coi Leray’s net worth is now estimated at a cool $2 million.

Do you want to know more? Read on to learn how the Coi Leray net worth started and how the young rapper intends to leave her legacy. Get to know her famous father, her height, and a rap song full of other interesting inf

Who is Coi Leray?

Coi Leray is a young american rap artist and vocalist that believes in doing her best.

Boston born, Brittany Collins a.k.a. Coi Leray spent her teens in New Jersey where her rapper dad, Benzoni, encouraged her from an early age to be independent and unique. Living with 5 brothers inspired her individuality, and by 17 she had left the family home and started a career in sales, something she was very good at. However, despite working at a job that was miles removed from music, it kept playing in her heart.

She released her first mixtape in 2018, and her music was distinctive in that it brought her listeners into a world that embodied her individuality and charisma. Coi Leray continues her tradition of originality with her EP, “Now or Never”, but she is also evolving into more than just a rapper. The artist she is becoming understands her craft is so much more than what is generally expected, and to leave a legacy you need to be extraordinary.

She hopes to expand her career into acting, the hair care industry, fashion and even car rims.

In 2019, a year after signing her first record deal with 1801 Records and Republic Records, she released EC2, her second mixtape, and her first extended play, “Now or Never” in 2020. After peaking in the top 40, “No More Parties” became Leray’s first Billboard Hot 100 entry and the song went platinum as certified by the Recording Industry Association of America.

What is Lana Rose’s net worth?
How much does Steven Rinella make?

Are you interested in how she accumulated her wealth, and what Coi Leray’s net worth is yet? Read on for more fun facts on this headstrong Taurus.

What is Coi Leray’s Net Worth Estimate?

The Coi Leray net worth in 2022 is evaluated to be around $2 million and she earns most of her income through the sale of her albums and concerts but she also makes some money through her own ‘Coi Leray’s Shop on Depop. She has 5.7 million followers on Instagram and she averages a decent dollar amount from the nearly 1.3 million YouTube subscribers who follow her.

What else can we tell you about Coi Leray? 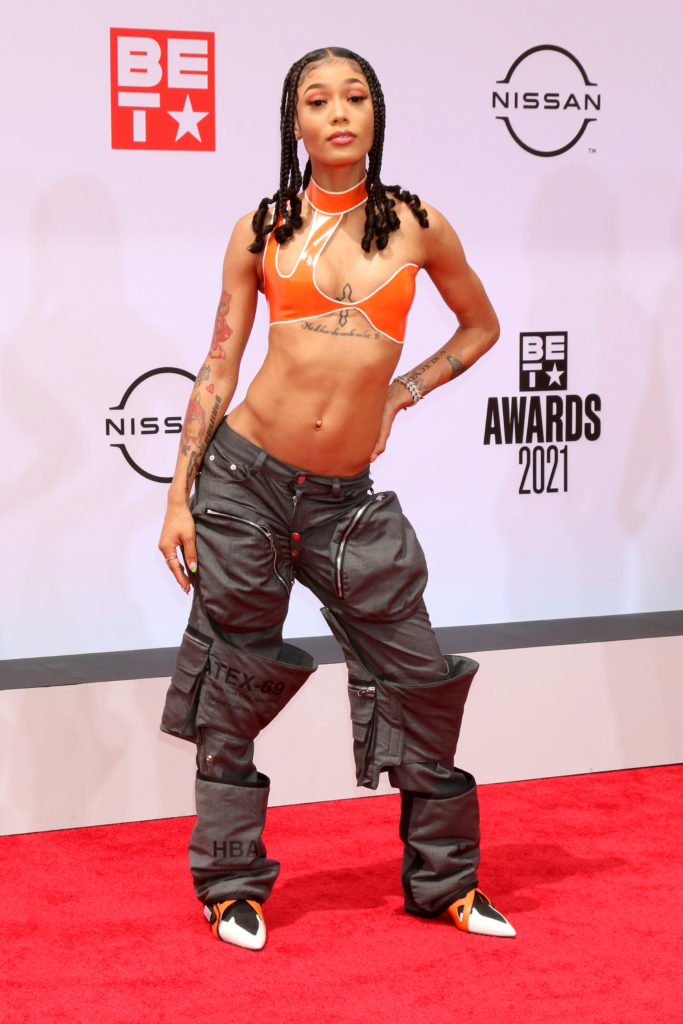 Coi Leray will turn 25 on the 11th May 2022 and when she takes her Gucci boot off, she measures in at a pocket rocket height of 5 feet and 3 inches(160cm), and the little wisp weighs a wrappers delightful 121 pounds (55kg). The little meteorite was born with black hair and she mesmerizes her fans with those dark brown eyes.

Coi Leray is a little Lady Godiva that is known for wearing very little, and sometimes nothing at all. Her body is covered in a variety of interesting tattoos that tell us a lot about her personality. Let’s take a look at the meanings behind some of the ones she has:

A large blue butterfly morphing
Coi considers butterflies to be beautiful creatures like herself. Her body is covered with them.

Right forearm: A little horned anime character with pink hair
She got a tattoo of “Zero Two” because she is a huge “Darling in the Franxx” fan. Do you think she has any other cartoon tattoos?

Underboob: She has a cross tattooed between her breasts and below that the words, “Not all those who wander are lost” with a figure silhouette.
Meaning: This is the sign of her faith in Christianity.

Neck: The planet Saturn
The planet tattoo symbolizes her dedication and hard work in her career.

Upper back: An intricate tattoo of a Koi fish. A large purple flower is tattooed below the fish with waves rising up from behind it and reaching toward the fish. Two small butterflies are tattooed just above the fish.
Meaning: Koi fish represent good fortune, and it is a depiction of her stage name.

Ankles: The right one says, “God’s” and the left one says, “Gift”.
Meaning: God’s gift is her way of thanking the almighty for everything she has accomplished in life and continues to accomplish.

Are you ready for Coi Leray’s net worth and to find out where she grew up?

Coi is a beautiful mix of Puerto Rican and Cape Verdean. She took her first breath on a windy and cold Spring morning in Boston, Massachusetts on May 11, 1997. The rapper was named Brittany Collins, but she later chose her new nom de plume.

As a child, she lived in Hackensack, New Jersey, with her two brothers, Kwame and Taj. Her father, Raymond Leon Scott a.k.a. Benzino, is a semi-famous rapper and producer. Today he is better known for his beef with Eminem that has been ongoing since 2003 when The Source was canceled. Following the cancellation of The Source, Leray’s father divorced her mother.

Coi has always been a fan of music, and grew up listening to Rihanna and Chris Brown, but she became more interested in rapping after hearing songs by Chief Keef and Rich the Kid. Her bedroom mirror was a great place for practicing her singing, rapping… and twerking. Her father inspired her to get into hip-hop and she released her first songs under the name Coi Leray (meaning Koi fish in Japanese), “Bow Down,” with her brother Taj, as well as “Rock Back” on her YouTube channel in 2011.

This was when Coi Leroy’s net worth started taking a more positive shape. Let’s check out how her career is going. 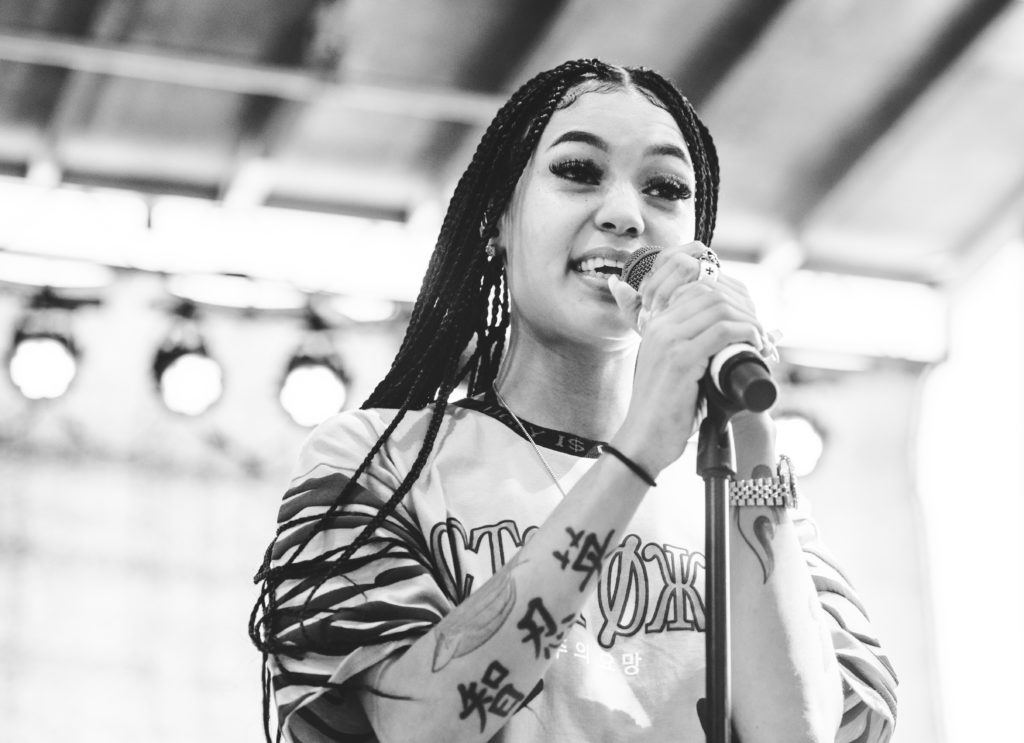 We mentioned earlier that Collins loved dancing and singing in front of her mirror. The mirror later became an iPhone; and soon Coi Leray was being noticed… and trendily twerking her way to more than a million subscribers and some serious dollars being added to Coi Leray’s net worth.

Coi occasionally rapped freestyles and recorded some songs on the side, but didn’t fully commit to music until 2017, when she released G.A.N. (Goofy Ass N***az). Soundcloud went wild for the New Jersey native’s single and drew new attention to her. It was an attempt to apply pressure from a female point of view, and to continue from there.

Things really started blowing up for the growing female talent in 2018. Her first ‘real’ mixtape, “EveryThingCoz”, showcased her bespoke style with tracks like “Pac Girl” and “No Letting Up”. Coi’s efforts led to a recording contract with Republic Records as well as opportunities to open for big-name artists like Gucci Mane and Jay Critch. While her latest project EC2 continued the fiery pace the young artist is on, it also displayed a progressively mature sound, including more melodies and better production.

“Now or Never”, Coi’s next EP, marks a huge change for her. As the artist transitions from a girl who’s just having fun to a woman, we witness her growth and metamorphosis into a true artist. This is mirrored by her intense love for butterflies (she has them tattooed all over her body). She has calmed down and lowered the volume slightly. Leray said that going through stuff can do that to a person but it also helps her grow, which leads to more s(h*t)tuff!

As for “Everything CoZ” and EC2, I see it as Baby Coi looking for herself and not caring. Now she sees her new projects as opportunities to gain a greater understanding of the artistry of music. In “Now or Never,” listeners will be able to hear Coi’s talents. The vocalist displays skillful rapping, but she also incorporates a lot of singing and emotion, something we’ve never seen her do before.

As she sings her heart out to her special someone in “Slide,” Coi gets on her grown-up and sexy vibe. The pop star motivates herself, her family, and her team with conviction on “Do Better” while confronting a tumultuous lover on “Messy.” If she carries on improving we can expect Coi to become a true megastar in both rap and pop.

In addition to her music career, Coi has been breaking through in a variety of other areas as well. Her empire has grown to include acting, hair care products, a clothing line, brand campaigns, and even her very own line of rims. “Now or Never” has the potential to move her forward. She loves cooking and hosts her own YouTube culinary shows.

In the future, Coi aspires to be the most legendary and successful artist in the world. In today’s world the best way to stand out is to be different, and she is doing just that. My goal is to be bigger than Ariana Grande, Lady Gaga, and Nicki Minaj. As great as they are, I’m going to leave a huge impact.

With this go-getter attitude the little rapstar is sure to add to the Coi Leray net worth. But does Coi Leray have a boyfriend?

Coi Leray was diagnosed with Attention Deficit Hyperactive Disorder but instead of hindering her, she has used her energy to create Coi Leray’s net worth. The tattooed lady rapper has been connected to a few male names in the past, but at the moment it looks as if she is taking her career seriously… and putting men on the backburner for the meantime.

There is very little information to be found about her mother but she had five brothers. Her father played a major role in her earlier musical exploits and his rapper influence can still be heard in most of her songs. Raymond Leon Scott, also known as Benzino, is a semi-famous rapper and producer. Since the cancellation of The Source in 2003, he has been engaged in a feud with Eminem, which continues. The cancellation of The Source led to Leray’s father divorcing her mother.

Coi Leray had many musical influences while she was growing up, none stronger than her father, who inspired her to release her first songs. Her early listening included Chris Brown and RiRi followed by and with:

Montclair High School in Montclair, New Jersey, conferred an honorary diploma on Leray in 2021 and she currently resides in Los Angeles.

The butterfly rapper’s most recent romantic link was with Quinton Armani Gardner, better known as the canadian rapper, Pressa… but it seems as if the two might have separated according to the latest LA gossip. She has also been previously seen with BlueFace and she had a serious relationship with Trippie Redd, yet another rapper who she dated.

We have established that this crackerjack young female rapper worked hard for the dollars in the Coi Leray net worth coffers. Her Taurus stubbornness has helped her amass around $2 million as of 2022, and with her new businesses ready for launch, we are sure to see an increase soon.