Bert Kreischer Net Worth – How Much Is He Worth?

We have the right answer to that! We will discuss Bert Kreischer net worth, his age, bio, height, weight, career, and more in this article. Bert Kreischer is an American stand-up comedian who loves to perform shirtless. He became popular

Who Is Bert Kreischer?

Bert Kreischer is a very talented American. He is a stand-up comedian, a reality TV host, and an actor. He is also a popular producer and a podcaster. He became the podcast host of “Bertcast” in 2012 and he co-hosts two other popular podcasts as well. “Bill and Bert” and “2 Bears, One Cave”.

Alan Alda’s Net Worth – How Much Is He Worth?

Bert Kreischer was born in Tampa, Florida on November 3, 1972. Albert Kreischer Jr. was born to mother Gege Kreischer, and father Al Kreischer and was raised in Florida.

Al was a real estate attorney, while his mother Gege worked in early childhood development. Bert Kreischer attended Florida State University (FSU) in Tallahassee, Florida for six years between 1991-1997. Before that, he attended a Jesuit High School in Tampa.

Bert Kreischer majored as an English student and was also a member of the Alpha Tao Omega Fraternity. In Kreischer’s sixth year at Florida State University, Rolling Stone gave him the title “the top partyer at the number one party school” in the United States.

The article titled “Bert Kreischer: The Undergraduate” tells the story of his life as an undergraduate. Bert was a young man who wasn’t worried about the future at all. He was a man of the moment, partying as much as he could, every day.

The first time he went naked in public was to deliver a speech. Bert says he was shocked only for a minute. After that, he just kept talking and talking not minding the surprised looks on the faces of the audience.

After reading the article published by Rolling Stone, Oliver Stone attempted to buy the writes to Kreischer’s life. The film producer, director, and screenwriter wanted to make a movie about Kreischer’s life but the deal was not successful.

After the deal fell through, Oliver had to return the scripts he had collected from several writers. It was one of these writers that sold his script to National Lampoon for the film “Van Wilder” that debuted in 2002. Indirectly, Van Wilder was inspired by the article published by Rolling Stone years ago.

In the movie, Ryan Reynolds played the role of Van Wilder which depicts Bert Kreischer’s life. In an interview in 2014, the then 41-year-old Bert Kreischer said he had never seen the movie as at then. He claims he had nothing to do with it.

However, in an episode of Joe Rogan’s podcast, Bert says National Lampoon later told him he was the inspiration behind the movie. He also added that he would never sue them for making the movie without his permission.

Bert Kreischer was born in St Petersburg, Florida, and lived a greater part of his life there. He graduated High School and College in Florida as well.

Like many other stories about himself, Bert doesn’t talk much about his personal life. In December 2003, he got married to his sweetheart LeeAnn Kemp. LeeAnn Kemp is an American actress, a writer, and a podcaster.

LeeAnn Kemp who is a year older than her husband grew up in Georgia before finally moving to Los Angeles to live her dreams. She was a member of the team of writers who wrote “My Biggest Fan” a 2005 teen comedy.

LeeAnn started as a nurse in “Destiny Stalled”, a 2000 film. Currently, she’s the host of “Wife of The Party”, a podcast that started in 2008. In 2004, they had their first daughter, Georgia Kreischer. Two years later, they had another daughter, Ila Kreischer.

Bert had a good relationship with his parents while growing up. In an account, he even recalls his dad waking him to celebrate his making All-County Baseball in Jesuit High school.

As nonchalant and playful as Kreischer may be, he is scared of heights. It wasn’t until he was 35 that he was able to conquer the fear and ride rollercoasters.

He says it was the Busch’s Garden in Florida that helped him conquer the fear of rollercoasters. Since he spent most of his childhood there before the rollercoasters were built, memories of the place keep his fear in check.

Bert Kreischer loves his hometown a lot. He talks about it, its attractions, and parks from time to time. He says he’ll never forget the period of his life he spent in Florida.

Bert Kreischer loves to travel. He also loves to watch movies that Al Pacino and Natalie Portman stars in. He says they’re his favorite actor and actress. Bert Kreischer is known for going shirtless while performing. He is a professional fun seeker and he’s proud of it. 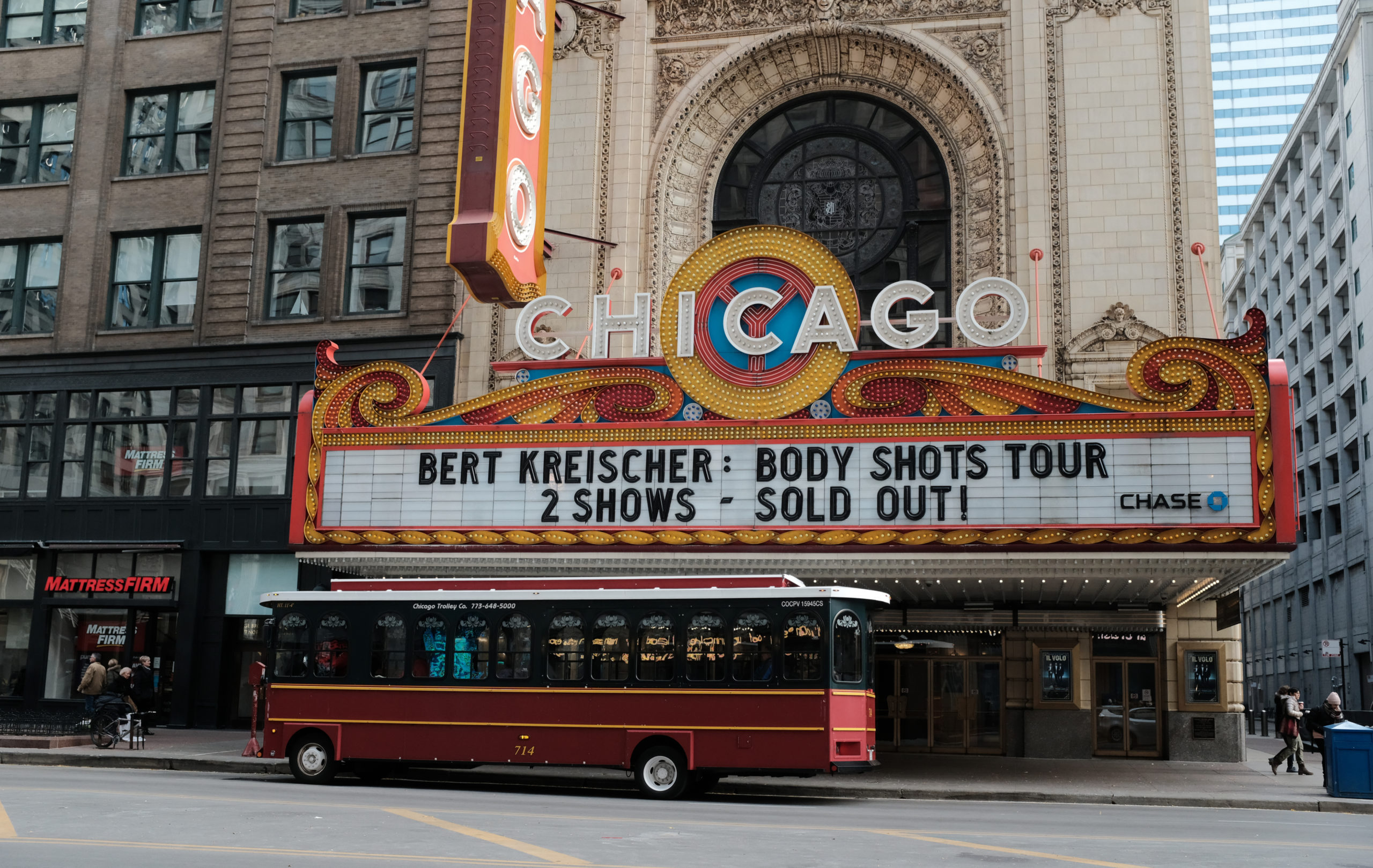 Over the years, Bert has developed quite a reputation in the comedy industry. From making short comedy films to hosting TV shows, and now podcasts, he has been making people laugh non-stop.

Bert said the first time he realized he wanted to be a comedian was sometimes in the 90s. He recalls telling his then girlfriend who he says thought it was stupid.

Bert Kreischer’s first stand-up comedy performance was at a nightclub called Potbelly’s in Tallahassee, Florida. A radio station had set it up for him to perform after Rolling Stone’s article went viral. He wasn’t prepared for it and almost had a Miller lite beer but he was stopped by a fellow student.

That was his first time on stage but he killed it in 30 minutes. After this, he sent Jason Steinberg who was an agent in New York, a tape of his set. Jason then invited him to watch some standup comedy shows.

Not long after, he was working the door at Boston Comedy Club in Greenwich Village. A few months later, Will Smith discovered him and offered him a deal at his production company.

The first film Bert starred in was “Prepare To Meet Thy God” in 2001. It was a short comedy film directed by Jay Gira. It was inspired by Christian Anderson’s story of the phoenix bird that was cast out of the garden with Adam and Eve. It featured other actors like Brent Roam, Brian Ramian, and Laura Lane. He also starred in “Life with David J”.

In 2004, Bert appeared on volume 2 of “National Lampoon Live: New Faces”. He also appeared as a guest in season 3 of the series “The Shield”. That same year, a story of his was featured in season 1 of “Shorties Watching Shorties”, a Comedy Central series.

He wasn’t in any more films until 2007 when he appeared on “Alpha mail”, a short film directed by Brian Sipe in 2007. Alpha Mail also starred other actors like Bruce Kirby, Ken Garito, and even the voice actor, Rick Pasqualone.

In 2008, he was one of the competitors in the reality competition series “Reality Bites Back”. It was hosted by Michael Ian Black and first aired on Comedy Central. He competed with Tiffany Haddish, Amy Schuffer among many others.

Bert’s first comedy special aired in 2009 on Comedy Central. The stand-up comedy, Comfortably Dumb was directed by Manny Rodriguez and was well received by the public. Especially the middle-aged population.

In June 2010, Bert began to host his reality show on Travel Channel. The show titled “Bert The Conqueror” first aired for about a year. The second season premiered on April 3rd, 2021. However, it wasn’t until June 3, 2016, that the third season aired.

As of 2016, the total number of episodes aired was 40. Bert The Conqueror showed Bert traveling across the country and outside as well to places like Canada and Mexico. The show was to promote water rides, rollercoasters, and other fun machines.

In 2012, Bert started hosting his second reality show on Travel Channel. The adventure series “Trip Flip” was centered on vacations. In the series, Kreischer convinces a few people to go on a surprise vacation with him. Trip flip had four seasons and finally came to an end in 2014.

In 2016, Bert Kreischer released his second comedy special on Showtime. It was titled “The Machine”. The Machine is centered on Bert’s real-life adventures. Especially how his past as a drunk came to catch up with him. As of 2021, the machine had been watched more than 85 million times.

In 2017, Bert served as a voice actor for the character “Rip Hardcore” in “The Loud House”. The Loud House was an animated series on Nickelodeon that first aired in 2016.

In the same year 2020, “The Cabin With Bert Kreischer” aired on Netflix. The reality series has only one season as of February 2022. In the reality show, Bert goes to the woods for some self-care but he brings his friends along.

Between 2011 and 2021, Bert made several appearances on the reality show “Rachael Ray”. He also made guest appearances on “Late Show With David Letterman”, “Master Debaters With Jay Mohr”, “Last Call With Carson Darly”.

Others are “Comics Unleashed”, “Jimmy Kimmel Live”, “This Is Not Happening”, “Lights Out With David Spade”, “The Kelly Clarkson Show”, “Straight Up Steve Austin” and so on.

In 2014, Kreischer published his book “Life of the Party: Stories of a Perpetual Man Child”.

Apart from comedy specials and reality TV shows, Bert Kreischer has also taken to podcasts over the years. His first podcast is “Bertcast” which he began to host in 2012. This podcast had been on the “All Things Comedy Network” ever since its debut.

Other podcasts he hosts are “2 Bears, 1 Cave” and “Bill and Bert”. Two Bears, One Cave aired in 2019 with his friend, Tom Segura as co-host. Bill and Bert, on the other hand, is co-hosted by Bill Burr and was released too in 2019.

Other podcasts he has made guest appearances on are “The Joe Rogan Experience”, “WTF With Marc Maron”, “Your Mom’s House” among several more.

Eric Andre Net Worth – How Much Is He Worth?

Bert Kreischer was awarded the “Creative Impact in Comedy Award” by Variety.

Bert Kreischer’s Net Worth and Summary

Bert Kreischer is known for going shirtless while performing. He has earned his fair share of respect and popularity in the industry.